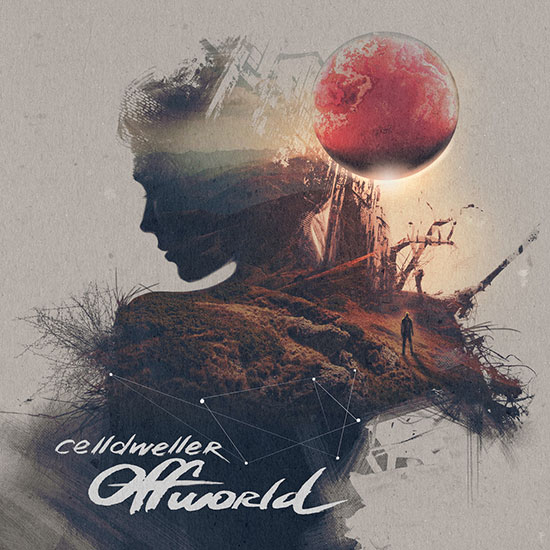 Celldweller has also released a new music video for the shoegaze track “Echoes.”

“This song (“Echoes”) really captured the shoegaze sound I have loved for years. Where I had sprinkled elements of shoegaze throughout the album, this song was 100% unapologetically shoegaze.

I’ve been a longtime fan of 90s Shoegaze artists but never really had a place to produce in that style on my own tracks. This was the perfect place to infuse those vibes across some of the tracks. I approached other songs with more of an Acoustic Guitar backbone and even delved into some Blackgaze (“Last Night on Earth”) inspired stuff to bring in the heavier side of things.”

“This album is like no other Celldweller album I’ve ever made which was completely intentional. While exploring the idea of Offworld and contemplating what I wanted it to say musically, I found myself wanting the music to be a more organic, breathing & evolving thing. This made me approach songwriting by first picking up a guitar instead of a synthesizer and processing them through a vast world of guitar pedals. Further mangling organic sources and Infusing the tracks with my traditional electronic sound design resulted in an album I’m really proud of. ” – Klayton (Celldweller)

The album’s 11 tracks range from the soul searching “How Little I Must Know,” to the modern shoegazer “Echoes,” the somber a cappella “Mother’s Arms,” to the acoustic guitar driven “The Great Divide,” and the heavy, yet atmospheric vibe of “The Last Night on Earth.” The album begins and ends with the title track & reprise of “Offworld,” which gives the album a narrative backdrop as a sci-fi adventure of leaving the world behind – perhaps to explore a new one or join life on the other side, closing the album experience with a familiar Celldweller lyric… “we will never die.”

“Offworld” is available now for digital purchase/stream, CD, and vinyl. The digital/CD version of the album includes a bonus remix by Ulrich Schnauss (Tangerine Dream).

Also available, is the new Lyric Video for the Blackgaze track “Last Night on Earth.” Watch now, via the YouTube link below.