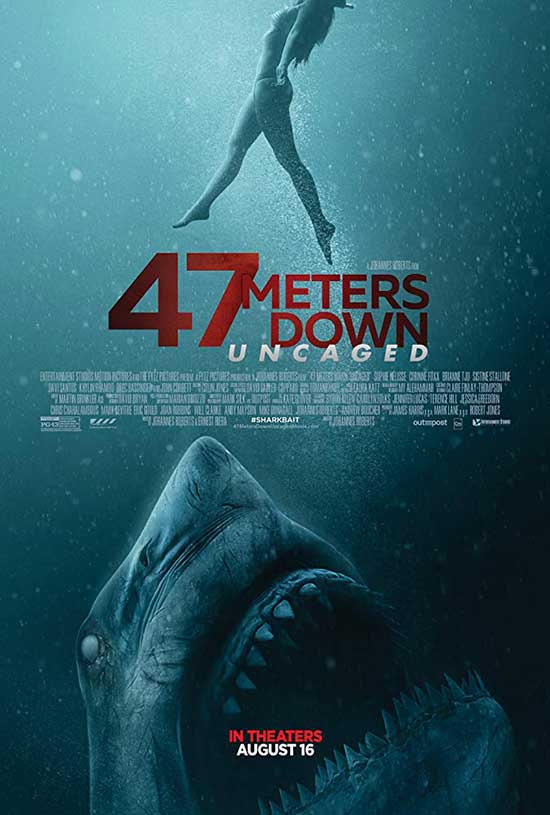 You want pretty girls? Got ‘em.

Did you say you want scary sharks? Well, we got sharks.

How about pretty girls being stalked by sharks? Oh, Hell, YEAH!!!

You want it to be realistic? You just had to ask for too much, didn’t you?

“47 Meters Down: Uncaged” starts like a random afterschool special when Mia is “accidentally” pushed into their private school’s pool by the resident social queen, Catherine. Don’t bank on this story element as it results in mostly dirty looks exchanged in a couple of different short scenes. Mia’s step-sister Sasha claims Mia isn’t her sister and attempts to hide her shame while sticking close to her friends. Way to set up that supposed emotional “twist” you already know is coming towards the end of the movie.

Back home, we see Mia and Sasha are step-children in a blended family with Sasha’s mom and Mia’s dad. Mia is back with her dad after being separated for years after a divorce. I guess. The only thing that matters is she is back now, and things aren’t going so well.

Worse, Dad has been exploring some underwater Mayan ruins in the nearby jungle. Archeologists are coming in to examine the site, and he must finish mapping all the tunnels. As a result, he won’t be able to take the girls diving as promised. Oh, no. Bummer.

But, wait! He and Mom have arranged for the girls to ride on a boat designed for shark viewing. Yeah, just the thing for fun and family bonding. Unfortunately, once the girls arrive for the 3-hour tour, they discover Catherine and her entourage are scheduled on the same boat.

Then Nicole, played by Sistine Stallone (she’s mostly okay with the limited role), decides raiding the stored diving supplies for the archeologists is a great idea. Alexa, who has been working with Mia’s dad in prepping the Mayan dive site, figures they can just swim to the first altar room and then back out.

There is an inclination to think the filmmakers offered up this confection of treacly-sweet family drama and “girls just wanna have fun” antics to make the events that follow the obviously bad choice to dive seem far worse in comparison. It is a likely theory. Once the four girls end up in the deep water inside the Mayan ruins, the film travels from one bad situation to the next worst-case scenario. With precious few exceptions, these girls become their own worst enemies.

Somehow, previously undiscovered or unnoticed, battle-scarred, blind great white sharks find their way into the ruins. When the girls attempt to leave, the tunnel they used to enter collapses. Then, one of the young guys assisting Mia’s father gets eaten after discovering the girls. Oh, how I bet those step sisters are wishing their butts were safe in the clutches of Catherine!

“47 Meters Down: Uncaged” is mostly like the original film; not very bright but, damn it all, it gives you exactly what it promises. Girls, sharks, and lots of “who is gonna get eaten next?” tension are laced through nearly every scene. You are there to see characters put through Hell while being beset by sharks, problematic water currents, and, most often, stupid humans getting in their own way. Johannes Roberts and Ernest Riera use the obstacles and failures like cudgels to beat the main characters like red-headed – well, umm, stepchildren. (I’m a soulless ginger, so I can say that.)

Frankly, quibbling about how the girls could not actually hear each other without earbuds or headphones or that sharks do not eat people constantly or any of the other silly mistakes/flubs/errors that allow this thriller to move forward regardless of intelligence or common sense is pretty much a waste of time. If you decide to watch this movie, it is to see people threatened by sharks; you ain’t expecting MOBY DICK-levels of metaphor or Thoreau-like self-analysis. 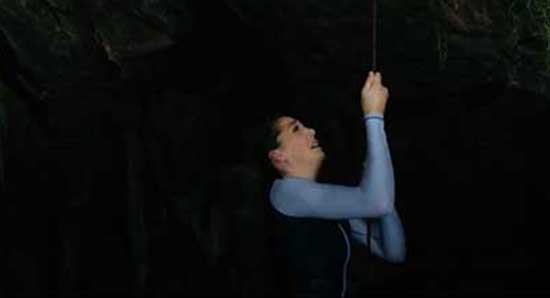 Does that make the film good? No. Unless you force yourself to ignore stupid choices by the characters made just to lead the film to the next big action set piece, you may shut it off. The pre-shark sections are so simplistic and cliched that you might want to give up out of frustration. Yet the scenes in the Mayan ruins are the best thing about this movie. Director Johannes Roberts has vastly improved since his early films and knows how to hook all but the most contrary folks out there with well-paced visuals.

Warning: Jump scares are a requirement in these films, and this film has plenty. Too many, to be honest, but a couple of times the misdirection is handled so well that the jump comes whether you want it to or not. That gets a bit of respect. And one attempted jump scare is an apparent homage to “Deep Blue Sea” and Samuel Jackson’s character’s awesome death, so that also earns the film a hint of goodwill.

(NOTE: The filmmakers add a statement at the end of the credits that sharks tend to kill about 10 people a year, worldwide, but humans kill millions of sharks each year. Maybe the next film in the series should be about sharks being stalked by humans.)