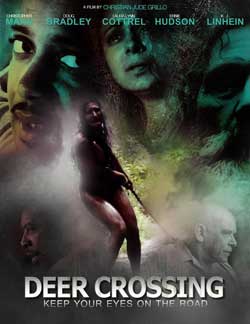 This film is about the Walton family. The mother (Maggie) and her son (Cole) head off after saying goodbye to Cole’s father only to have an accident near a country farm. They are found by a farmer called Lukas Walton who takes them to his farm and they are never seen by the father again. It’s now 8 years later and the father gets a call from someone who claims to be his son Cole. So the father hires an ex detective to go back to the County where his family went missing. But the Detective finds that there’s something more than just a missing persons case here. He also thinks that the local Sheriff (Doug Bradley) is keeping something from him. Lukas is raising Cole as his own son, and things escalate from there. But what has happened to the mother Maggie?

From the sound of the title, you might assume “Deer Crossing” to be a hunting film, or in my case maybe a ode to the Vietnam war based film, “Deer Hunter”. No, “Deer Crossing” refers to an accident that occurs when Maggie Chancellor (Laura L. Cottrel) and her son Cole are en route to visit some family. Not paying attention they take out a deer causing them to crash into a nearby tree. With the setup of a loving family, that family model is soon broken when Cole and his mother are kidnapped by a local hillbilly by the name of Lucas. Lucas is a model good old boy who lives out in the country and seems to be accustomed to kidnapping females (or in this case a small family) and taking them in as his own. Though Lucas, is a mean son of a bitch who lives day to day without any illusions in life besides taking what he needs when he wants it. 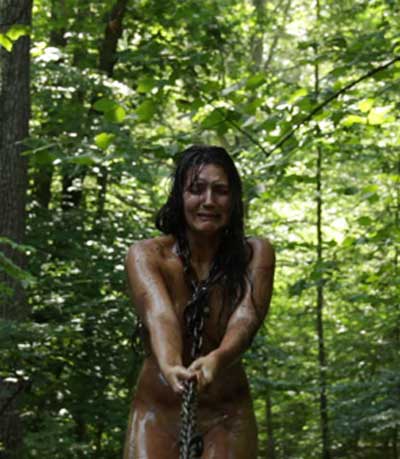 Well, this model may sound “somewhat” familiar, as a horror culture we’ve come to embrace the notion that back-woods occupants don’t live by the set of rules we are accustomed to. We’ve seen a variation over the years of these backwooders indulging, killing, torturing ands doing as they please, off the grid, and left to their own way of life.

8 years have passed and as we find from the various scenes, that Maggie has been held captive, drugged, held a sex slave for Lucas, and kept alive so that he can indulge as he pleases. Cole, now 8 years older, has been raised under Lucas Walton’s point of view kept secluded and mentally abused (for that matter). 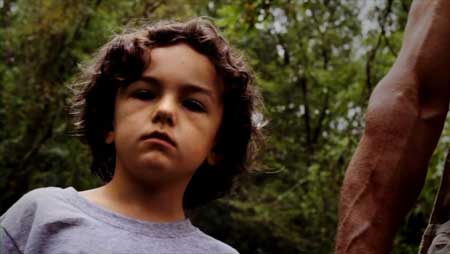 When Dr. Michael Chancelor (Warren Hemenway) receives a call from Cole, Michael hires Derrick Stanswood (Christopher Mann) a retired detective, who originally worked on the case, to locate his son. Reluctant, Stanswood takes the gig and investigates this off road corrupted mess of a county.

“Deer Crossing” is a hybrid for me that combines some really “mentionable acting talents (and characters others that I probably couldn’t recognize if I saw them in another film.

The film arrives under the guise of a hillbilly torture p*rn film. You might even make “that” decision with its false intro that jumps right into the action and then backs off. I’ve seen enough of these films in that it only partially enters “that” arena. We do get that sense that old Lucas is a motherf**ker and probably needs a beating or 2, however, “Deer Crossing” is also somewhat of a Lifetime-network-style-of-movie. I realize it sounds weird to mix the 2, however, I walked away with this feeling on the whole story. Shocking moments are kept minimal but when introduced are enough for uncomfortability. Certainly actor K.J. Linhein who plays Lucas Walton was the right man for the job. Maybe a bit too close for comfort on that note. From a quick look, K.J. Linhein has been typecast in roles that require a Jebediah style actor who doesn’t mind taking on the role of a homeless man from time to time. 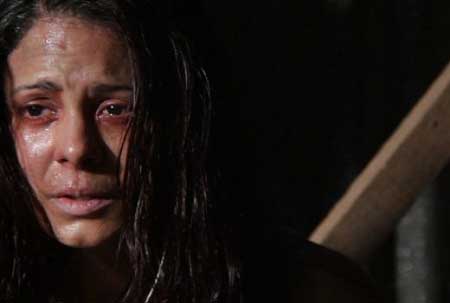 You also have to single out actor Tom Detrik who played his role of “Dick / Randy” (depending on who you ask) as an odd bird to watch out for. He feels like someone you’ve seen before, but can’t place a finger on. I thought his role was unique, edgy, off beat and appropriately sinister. More so, than EVEN old Lucas, the womanizer.

The review wouldn’t be complete without mentioning that actor Doug Bradley (aka Pinhead) gives us a different taste with his portrayal as the corrupted Sheriff Lock. Lock is hard to really nail down as being evil, but just enough to know that we wouldn’t want him as “our” sheriff. The production was noted as being only $50,000 which is hard to believe that they even got Bradley for less than $20K for his inclusion. Bradley does his best to country-tone his dialog, but ends up slipping into British tones from time to time. I enjoyed this bit of unintended humor. 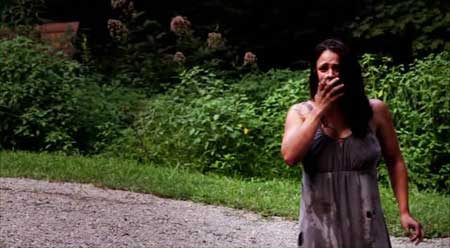 On the whole, I’m really in the middle on this one. It had bright and dreary moments, and then other times, I wasn’t so convinced. If you were to go by character factor alone, it really is down the middle. If its for storyline, I lean more on the less enthused end of things. 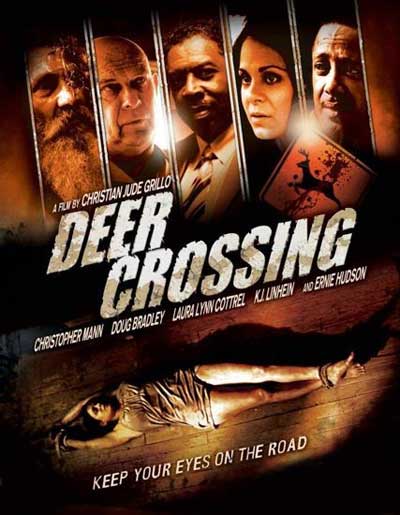 “Deer Crossing” offers some surprises in unlikely ways that perhaps separates it “enough” from the pack that it could still become a film to watch for. Maybe a touch of “cult” sprinkled on a “Lifetime” drama and you got yourself the movie “Deer Crossing”