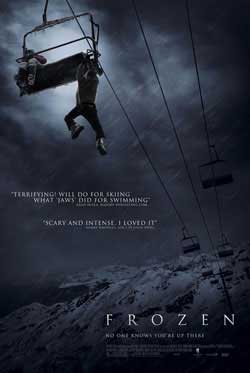 With all the facets of horror films coming these days, it’s always great to see one that directly appeals to our fears that doesn’t directly involve being sawed to pieces or stabbed with a butchers knife. Adam Green’s Frozen is one such film that really digs into the heart of a good situation gone bad. If you didn’t get the idea from the title…it’s simply being frozen. Though the idea is actually much more harrowing than that. Adam Green asks the question…imagine if you were on a ski trip with your friends and suddenly while you were on your way up, the ski life trolley stopped? Not only that, but imagine that you knew the resort was going to be closed for a week, it is dark out and you are sitting there hanging high above the ground which could easily break your legs if you fell? Imagine all this and that the situations only gonna to get worse in this freezing environment. Yep you got it, the thought gives me chills just thinking about it, however watching a film about it is as close as I want to come.

The idea is simple and yet in instances like this, that really is all that matters in situational horror. As we watch the time pass and the 3 stranded kids deal with the situation the best they can. We know things are about to get worse and that’s where the tension lies. Far below is the ground to safety and up above is an icy wire that could lead to a nearby pole’s ladder if one can hang on without falling or cutting their hands up. Not to mention, frostbite  is setting in, the nights are freezing cold with only a promise of daytime sun to bring in a little heat. No help  is in site and yet the “idea” is still something they hang on to as a saving grace.

Director and writer Adam Green knows horror. Whether the idea came to him in a ski outing or just in a dream, this movie hits home on facing ones fears and dealing with impossible situations. That single hope of being rescued and recovered seems to gradually fade away as the actors deal with a single location with options that just all around suck. Where do you go, what would “you” do? A few notions that I’m sure viewers will relate to and even ponder themselves. This is the inherit traits that engage the viewers with a unique cinematic experience.

The film stars Emma Bell as Parker O’Neil, Shawn Ashmore as Joe Lynch, and Kevin Zegers as Dan Walker. To bring you up to speed Emma and Dan are dating while Joe is Dan’s best friend. The outing was supposed to be a guys night out but Dan felt the need to bring along his girlfriend. As the 3 enjoy the thrill of skiing and taking on one massive mountain, the time is short and one last ride is in store before calling it a night. Bad mistake when the ski life operator gets distracted and his replacement doesn’t realize that the ski lift wasn’t empty. Oh, ya…its a holiday weekend and the resort will be shut down till next week. combine all this tension into a tense situation and you have the base of Frozen. I for one enjoy the simple fear inducing rides that demonstrate that every horror film doesn’t have to have zombies. vampires or a psycho with industrial toys. Maybe just me, but when these films are effective they really fill a certain horror void that is missing sometimes. Good thing for us Adam Green recognizes that hole and comes to the rescue. “Frozen is a intense thriller that will leave you on wits end right till the last frame. Really nothing more needs to be said, just check it out!