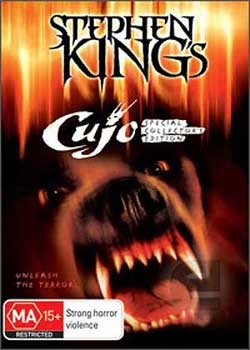 A friendly St. Bernard named “Cujo” contracts rabies and conducts a reign of terror on a mother and her asthmatic son.

There was a time when it seemed like everything Stephen King put to paper was turned into either a television mini series or a feature film, and I mean everything. “Cujo” was one of his earlier successes, a novel about a beloved St. Bernard that gets bitten by a rabid bat and turns into a viscious, blood thirsty predator as a result. It was a really good novel but it didn’t read as if it would make a very compelling film. Sure, in the book the enormous dog is turned into a truly frightening creature thanks to King’s imagination & his ability to translate what it comes up with into words but could a screenwriter make the threat that worked so well in the book be just as effective on the big screen? 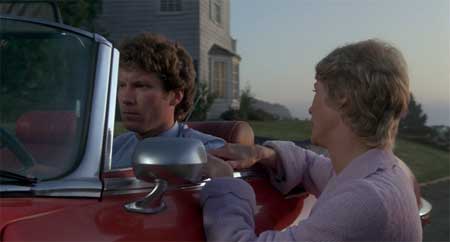 The film begins with Cujo chasing a rabbit through a gorgeous rural countryside as the credits play. Eventually Cujo chases the rabbit into a hole in which only his head fits and as he’s barking away he awakens a colony of bats that happen to be hanging around. One of them alights upon Cujo’s nose and bites him and this bat has rabies, passing it on to Cujo. This is actually a pretty creepy scene to watch, although no blood is spilled the bite is seen closeup and the little bat really gets his fangs into the poor dog. We then get some close up scenes of the bats heads and their really sharp looking fangs which made me uncomfortable and if you have Chiroptophobia (Fear of bats) then you will definitely be disturbed by this scene. In any case it’s a great sequence going from the lush surroundings that Cujo & the rabbit are running through to the dark, dank environment that the hole leads to. 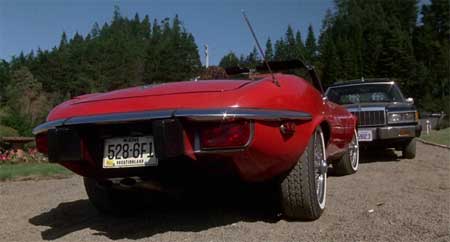 But then the film gets to introducing us to the central characters and decides it’s going to go the soap opera route for a while. Dee Wallace Stone plays Donna Trenton who is the archtypical rural housewife with a young son Tad (Danny Pintauro) & husband Vic (Daniel Hugh Kelly) who, not so typically, is an advertising exec who goes away on business a lot. Besides Tad’s severe case of Asthma there’s nothing really different about the family. Nothing except that Donna is having an affair with handyman Steve Kemp (Dee’s real life husband Christopher Stone) but she begins to feel that what she’s doing is just wrong and shortly after the film begins she tells Steve that she wants to end the affair. Steve doesn’t take the news very well and doesn’t believe that she really means it. Her husand finds out about the affair soon afterward and the film slowly essays the story of how Donna & Vic deal with the situation. 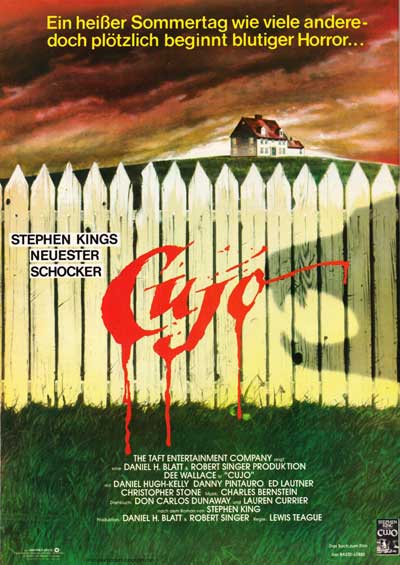 In addition, Vic has a crisis as well. A breakfast cereal that his company created a (Very successful) commercial for turns out to be making children violently ill from coast to coast. Now he is in repair mode as he has to travel back to headquarters and figure out a way to make things right commercial wise, so he goes away not too long after the film begins. The film goes back and forth between Donna at home & Vic at work dealing with their respective problems but not being able to work on the problem that they share. A lot of people mistakenly think that Cujo belongs to them but in actuality he belongs to auto mechanic Joe Camber (Ed Lauter) and the film also spends some time with him and his family which for me only served to slow an already slow film to a crawl. But there is a method to the madness behind the script by Don Carlos Dunaway & Lauren Currier, who had written a lot of scripts for television and indeed “Cujo” feels an awful lot like a soap opera both in the initial story and the acting. Even the music (By Charles Bernstein) feels like it came straight out of “General Hospital”. 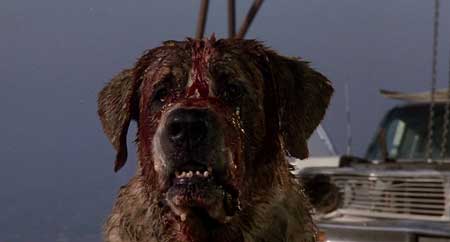 This isn’t to disparage any of them though. As I said there is a method to the madness here although it can hardly be called madness, it’s a really slow burn kind of movie that just happens to be about a very large rabid St. Bernard. As a matter of fact Cujo doesn’t even start to get nasty until nearly 45 minutes of the film has gone by! Although every so often director Lewis Teague (Alligator, Jewel Of The Nile, Cat’s Eye) lets us know that poor Cujo is slowly beginning to lose it. When you really take a good look at it you see that the film is giving us a whole lot of character development in an effort to get us to reall know what makes the characters tick and while I think there’s a little too much of it here for what was being billed as a horror film I can’t fault the filmmakers for their effort. 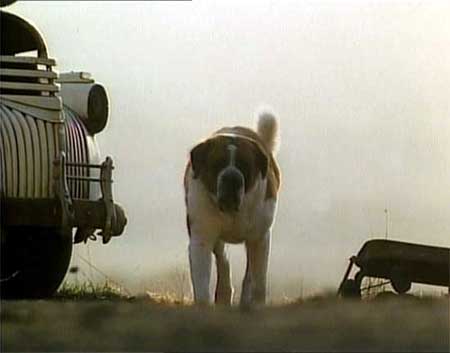 Eventually Donna & Tad end up trapped in their stalled car being terrorized by Cujo who will not let them out. In addition it’s really hot outside and the windows cannot be opened and this leads to young Tad having a serious Asthma attack with no inhaler in sight for relief. It becomes a tense standoff between a mother defending her child (& herself) against a creature who is intent on tearing them to shreds but the creature in question is a lovable dog who cannot be faulted for his actions which only leads the audience to feel empathy for the dog as well, more empathy for the dof than for the mother and child perhaps. While the dog is viscious as he attacks (He does chew through a few cast members before the final showdown), he’s also lovable and as I said earlier, it isn’t his fault that he contracted Rabies and got sick. 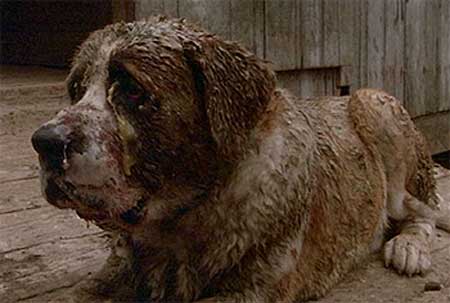 Cinematographer Jan De Bont does an excellent job of making everything look and feel like a Norman Rockwell painting and director Teague (Who is VASTLY underrated) does an excellent job in keeping the proceedings moving along despite the inherent slowness of the first 45 minutes. Dee Wallace Stone gives a great performance (She too is vastly underrated) here, running the gamut from loving mother/wife to emotionally torn woman to warrior defending her only child. Without her award worthy performance “Cujo” would be an outright failure…she carries the entire movie on her dainty shoulders. Daniel Kelly gives a good performance but he isn’t in the movie all too much. The late Christopher Stone isn’t in the film all too much either but his character is paramount to the film because of the affair he’s having with Donna and he gives a very “Macho” vibe to the proceedings. Young Danny Pintauro can scream with the best of them and when he goes into an Asthmatic fit he really sells it, another good performance. Frankly “Cujo” is filled with good performances but in the end it’s all about the war between Donna & the dog and the conflict between them is both tense & exciting. 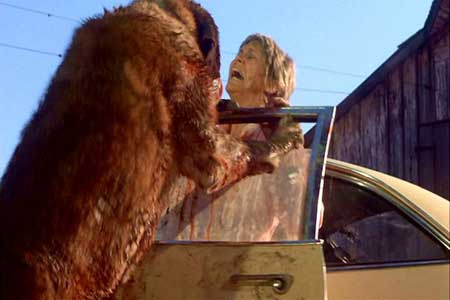 The word “Cujo” became something of a catch word in the years that followed. Whenever a dog (or any other animal) goes rogue you’re always going to hear someone say that it went “Cujo” and that’s more a testament to the power of the film than King’s novel. It’s a good movie that has a better reputation now than it did on it’s original release and if you haven’t seen it yet it is well worth your time.