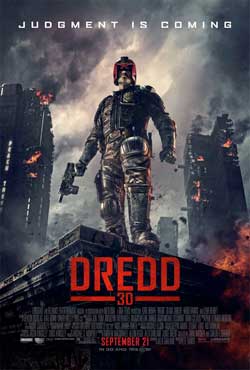 The future America is an irradiated waste land. On its East Coast, running from Boston to Washington DC, lies Mega City One – a vast, violent metropolis where criminals rule the chaotic streets. The only force of order lies with the urban cops called “Judges” who possess the combined powers of judge, jury and instant executioner. Known and feared throughout the city, Dredd is the ultimate Judge, challenged with ridding the city of its latest scourge – a dangerous drug epidemic that has users of “Slo-Mo” experiencing reality at a fraction of its normal speed. During a routine day on the job, Dredd is assigned to train and evaluate Cassandra Anderson, a rookie with powerful psychic abilities thanks to a genetic mutation. A heinous crime calls them to a neighborhood where fellow Judges rarely dare to venture – a 200 story vertical slum controlled by prostitute turned drug lord Ma-Ma and her ruthless clan…

Oh yeah, this sure doesn’t sound like your mama’s “Dredd‘ does it? Well if all you know of the character is from 1995’s “Judge Dredd” which starred Sylvester Stallone then you’re in for a bit of a rude awakening if you plan on seeing this version. A very rude awakening indeed…

Starring Karl Urban as Judge Dredd, the film gives us another vision of a dystopian future in which america is no longer comprised of 50 states. It’s now a series of urban complexes called “Mega Cities”. Mega City One is a giant one that runs along the East Coast and it is portrayed as a hell hole of violent crime, destitution & a populace that has relinquished most if not all of it’s freedoms to a hardcore group of defenders known as “Judges”. Judges have the ability to act as judge, jury & (In a lot of cases) executioners and they patrol the streets of the mega cities keeping the peace through sheer force & offer little to no mercy whatsoever. 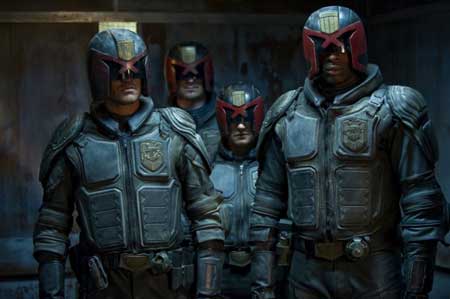 Judge Dredd is the most infamous of the judges in mega city one. As tough as judges are in general, they’re nothing compared to Dredd. As he is apt to proclaim before he obliterates criminals left to right…”I AM THE LAW”! That he is and to ignore that proclamation is to pretty much kiss your ass goodbye because after Dredd is done with you, you ain’t got much ass left anyway. In the opening scene Dredd is in pursuit of a trio of robbers escaping in a car and until they run someone over he seems to be content to just capture them. But once there’s a fatality he radios control to let them know that the criminals are now dead men driving & he’s taking them down! He blows out their tires (taking care of two of them immediately) but one of them escapes to a food court and takes a hostage. Dredd finds them and offers the clown a deal, give himself up quietly and Dredd will ensure that he only gets life imprisonment in an “Iso-Cube”. That’s Dredd’s idea of a bargain and he doesn’t really offer too many deals of any kind to anyone so when he does you should take it. But of course the wise guy refuses the deal and thinks he has the upper hand but Dredd has been there & done that before. The criminals comeuppance is pretty f*cking spectacular and perfectly shows the audience where Dredd’s head is at. 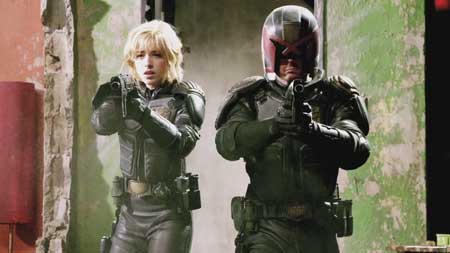 But the main story here deals with a building located in the heart of mega city one called “Peach Trees”. 200 stories high, Peach Trees is the domain of drug lord Ma-Ma (Lena Headly), a former prostitute who slowly engineered a takeover of the building from the three gangs that had split it up. Her drug of choice? It’s called “Slo-Mo” and it allows you to experience reality at 1% of real time and this is something of a burden for three low level thugs who are placed before Ma-Ma early in the film. She orders them skinned and tossed out of a window as both punishment & warning to those on the ground. Mess with Ma-Ma and you die, plain and simple and as horrible their fate is it’s made worse for them when they are given a dose of Slo-Mo before they are tortured and tossed to their deaths. This means that they experienced both being skinned & thrown to their death very slowly so it seems (to them) to last forever. A horrible way to die and the film spares no punches as we see the tortured trio splatter on the ground in a explosion of blood, brains & bodies. Heavy duty stuff. 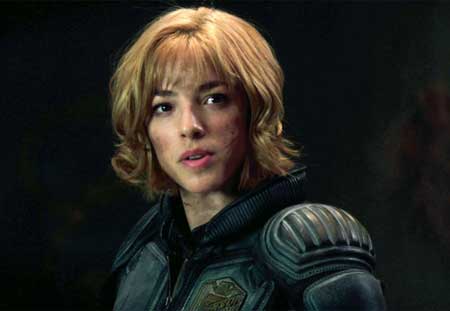 Dredd volunteers to investigate the crime and he has a rookie judge along with him for training. Her name is Anderson and while she hasn’t passed any of the tests in order to become a full fledged judge she has something that gives her an advantage, she’s a mutant with psychic abilities. In other words she can read your mind and this handy talent makes her worthy of a tryout at the very least. Too bad for her it’s with Dredd and her first investigation might very well be her last. Once the duo arrive at Peach Trees, Ma-Ma shuts the building down to the outside world and warns all inhabitants to stay inside and not to interfere with what she plans on doing…killing both Dredd and Anderson in cold blood. The shields that shut the building off from the outside also prevent any radio transmission for help from either Dredd and Anderson so they’re on their own. 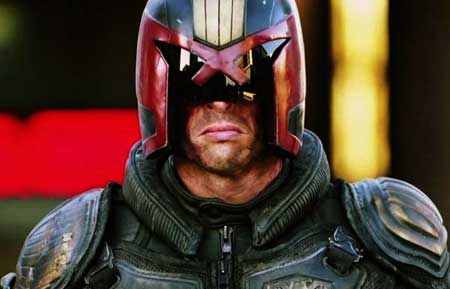 From here on in “Dredd 3D” is pretty much non stop carnage. The film makers obviously know and respect the character and make no effort to soften any of the violence in the film whatsoever. “Dredd 3D” is one of the bloodiest, carnage filled movies I’ve seen this year and happily it all works to make the film a riveting if unspectacular one. Now how can I call it both “riveting” and “unspectacular” in the same sentence? Well after 30-40 minutes of slow motion bullets tearing through faces, heads and bodies I became a bit desensitized to it. The overabundance of slow motion really began to do nothing more than slow down the entire movie. The drug slows down your perception…we get it already! There is no need to beat us over the head with it every five minutes. But I will admit that seeing flesh & blood fly into my face in 3D was pretty riveting! The 3D effects are spectacular and I really thought I was going to get splashed with some of the copious blood flying across the screen.

Lena Headly is terrifically vile as Ma-Ma and the script (By “28 days later” scribe Alex Garland) is wise enough to allow her to play the role without a hint of glamour. Ma-Ma has a hideous scar across her face, chopped up hair, bad teeth and a serious chip on her shoulder. In other words, there isn’t anything pretty about her and Headly revels in the grottiness of the character. The only hint we get to her femininity is early in the film when she takes a bath after taking a hit of slo-mo. She splashes in the tub and the drops of water in the air look like glistening diamonds floating slowly to the ground. Too bad the movie lingers on this scene for what feels like an eternity, I felt like I was on slo-mo myself during this scene. Olivia Thirlby gives a good performance as Anderson also, beginning the film as a innocent (despite the judge uniform she wears) and finding herself in the middle of a war and having to man up really quickly. Her beauty doesn’t get in the way of the violence and the film does well not to make her out to be anything more than a overmatched soldier under Dredd’s command. 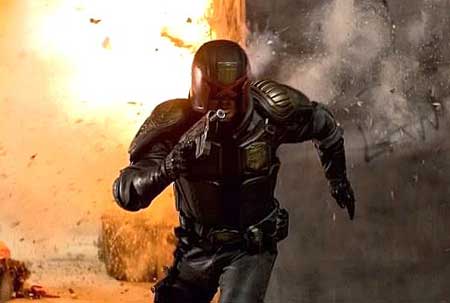 But none of this works if Dredd doesn’t convince us that he’s nothing but the baddest of the bad asses. Luckily Karl Urban doesn’t have much of an ego because he never takes his helmet off during the film…not even once. Whereas Stallone took his helmet off in the opening minutes of his film, Urban only emotes with his mouth and chin. And while it had to be murder having to keep his mouth pointing downward for the entire time without that visage the character wouldn’t work. Both Urban and the film makers knew that and made no effort to give him a reason to remove his helmet. In one scene he asks Anderson why she isn’t wearing her helmet during a gunfight and she answers that the helmet hampers her psychic ability. Dredd responds (in the most deadpan way possible) that a bullet in her head might hamper her psychic abilities even more than a helmet. It’s a funny line but Urban delivers it with nary a hint of humor. He really owns the role and is to be commended for his selfishness in wanting to portray Dredd as he should be portrayed.

The film makers are all fans of the “2000 AD” comic series from whence Dredd comes and it shows. There is nothing clean & glossy like in Stallone’s Dredd. Nope…this Dredd is all dirt, grease, blood, bones & most importantly…inhumanity. It is a seriously violent film that pulls absolutely no punches in it’s pursuit to give fans of the character the film they want to see. It succeeds spectacularly on that count but what about the non fans? I really think that the extreme violence is going to turn off the casual moviegoer. It’s not a movie for youngsters or the elderly. I don’t think it’s going to appeal to many women either (But for those women who are into this kind of stuff…gimme a call). And it’s not perfect, the over reliance on slow motion effects really slows the movie down to the point where I actually found myself beginning to drift off during an extended slow motion battle. And I liked this movie!! 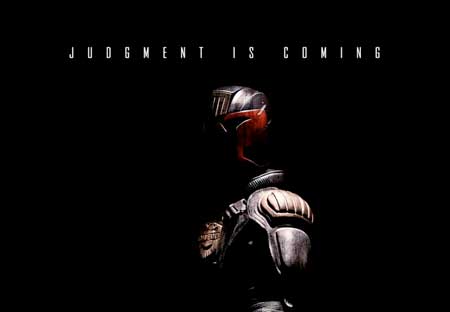 But it is a satisfying 90 minutes of carnage that doesn’t pander to it’s audience. It is what it is and it ain’t afraid to tell you so and I think that’s pretty rare in a movie these days. I enjoyed “Dredd 3D” and if you’re a fan you’re gonna love it, if you’re not a Dredd fan but dig hardcore action/violence films then this is right up your alley as well. If you don’t fit into either of these groups you aren’t gonna dig Dredd much at all, not that he would care. He’d just blow your head off and cycle off to the next situation without remorse or regret…how cool is that? 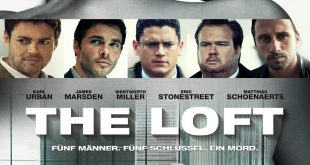