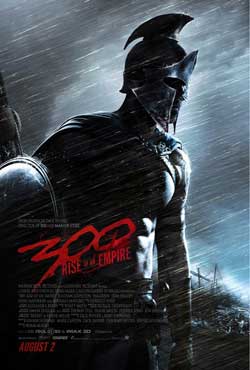 Why it took nearly 8 years to release a sequel to 2006’s “300” is easy to understand since the original didn’t end on a note that screamed “SEQUEL” to begin with. When I first saw teaser trailers for this one late last year I distinctly remember the audience groaning at the thought of another film featuring a group of sweaty, impossibly chiseled men swinging swords & axes at another group of similarly sweaty, impossibly chiseled men. But despite the groans it’s here and after watching it (being bludgeoned by it is more apt actually) with a large audience last night I can attest to the sound of cheering resonating throughout the theater, not groans. Three words: It Kicks Ass!

Based on another graphic novel from “300” scribe Frank Miller called “Xerxes” and co-written by “300” director Zack Snyder & Kurt Johnstad, “300: Rise of an Empire” takes place both during & after the battle to defend Sparta from the onslaught of God/King Xerxes (Rodrigo Santoro) & his enormous Persian army by Spartan King Leonidas (Gerard Butler) and his furious army of 299 spartan warriors. After their victory, Xerxes and his army proceed forward through the hot gates that the 300 fought so bravely to defend. General Themistokles (Sullivan Stapleton) attempts to gather the remaining armies of Greece to repel the Persian hordes but he fails to rally them to his cause so he takes a small army of mostly farmers & poets to fight the greatest battle they’ve ever fought against the vengeful Artemisia (Eva Green) who’s leading the massive Persian naval fleet towards Grecian shores.

First off, there isn’t too much of a female presence on display here but then again there weren’t too many females in “300” either. There are only two female roles in this film (Lena Headley reprises her role of Spartan Queen Gorgo) but I expected there to be stronger female roles here, it would’ve been an interesting take especially since the first film established that Spartan women are just as skilled in battle as the men are. Then again, the best role in the entire film is Artemisia and Eva Green is so smashingly dastardly in the role that she casts a wide shadow over everyone else in the movie. Her presence is immediately felt as soon as she appears and it just gets bigger & stronger as the movie proceeds. She combines sex appeal, anger, amusement & respect into a heady melange that makes Artemisia into one of the most fascinating female roles to come down the pike in a long time. The film would’ve been better served (& maybe even attract a wider female audience) if it was called “300: Rise of Artemisia“. 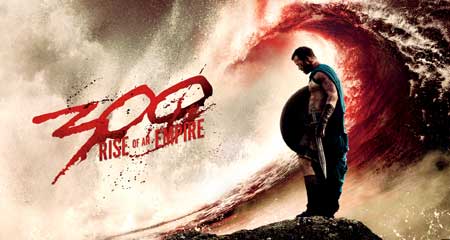 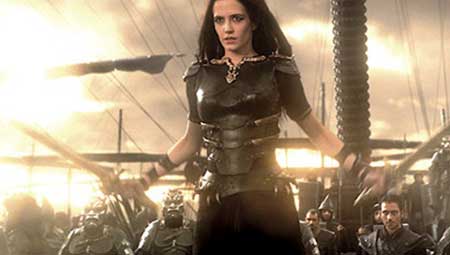 Sullivan Stapleton has all of the physical requirements required to play Spartan general Themistokles but he doesn’t have the gravitas that Butler had in the first film. His impassioned speeches to his dwindling troops just don’t have the same emotional heft to them although once the fighting starts the sheer fury, hatred & passion on display is a sight to behold – to hell with the speeches! Speaking of the fights, I think that “300: Rise of an Empire” just might be the bloodiest film ever produced by a major studio. Once the swords start swinging then all semblance of plot is pretty much damned and cast to the blood soaked ground along with copious amounts of severed hands, legs, arms & heads. The use of slow motion during the digitally created battles is a bit too prevalent but there’s a eerie sense of beauty to all of the carnage. The costume design for the Persian army is especially sleek with cenobitic looking designs that would look right at home in the next Hellraiser film, the Greek army favors leather loincloths, boots and nothing else so we can’t miss any of their limbs being hacked away. The fight choreography is stupendously inventive and it all plays out like the most barbaric, bloody ballet you’ve ever witnessed (& I mean that in the most complimentary way possible). If you visit Horrornews.net often and read my reviews (or listen to our Horror News Radio podcast) you already know that I’m not a proponent of CGI blood in a film, it just doesn’t look real. But I liked the digitized blood created for this film, it looks especially viscous & sticky, although there’s so much of it flying around that the effect begins to look unreal after awhile. The 3D on display is of the highest order giving true depth to the entire film, especially the battle scenes. 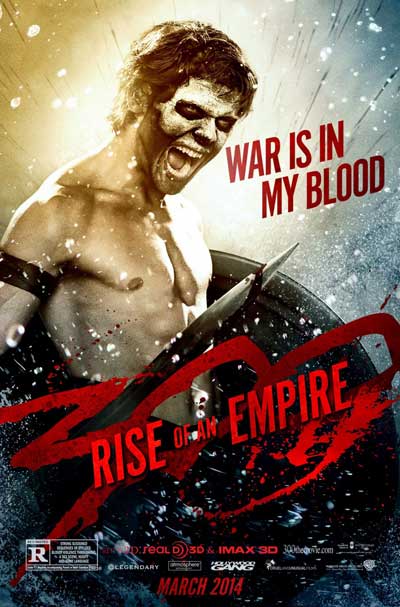 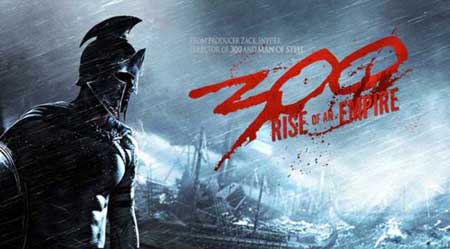 The plot might sound as if there’s a lot of skullduggery going on in the background but there isn’t and that’s the major faux pas with the film. It starts out as if it’s going to be a bit more focused on its characters but ends up relying on fight scene after fight scene after fight scene until its ending…which is also a fight scene. In the end it didn’t kill the film for me but some more time with Artemisia and her back story would’ve made this a far more interesting film, a showdown scene between her character and Queen Gorgo was something I was expecting but sadly it never appeared. The original film had a lot more going for it by way of plot/characterization but this film just moves too damned fast to even notice that there really isn’t that much of a story to pay attention to. 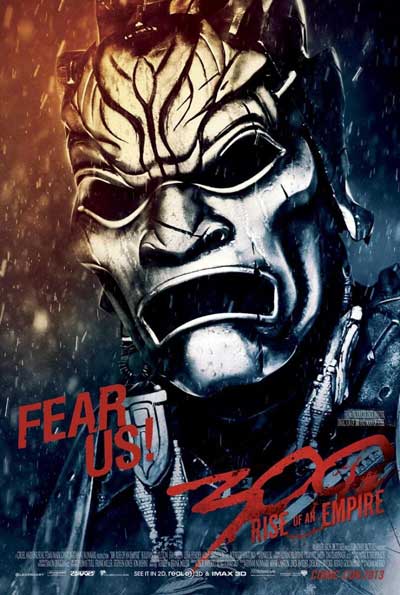 “300: Rise of an Empire” isn’t gonna rope in a lot of female moviegoers but I don’t think director Noam Munro really cares all that much about that. What he’s created is a violent blood orgy of epic proportions that has no interest in characterization or semblance of reality, it’s calculated to beat its audience into submission and it succeeds wildly. It’s exactly what you think it is and that was more than good enough for me. It ain’t for everyone but for those of you who get off on this kind of adventure…a garden of grisly delights is awaiting your visit.