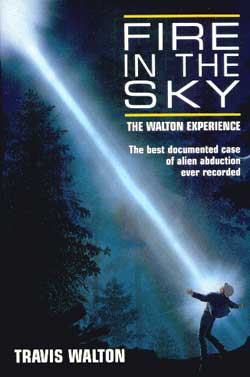 This Science fiction film from 1991 is based on the true story of Travis Walton. It is adapted from his novel called “The Walton Experience.” It stars D.B. Sweeney as Walton and Robert Patrick as his future brother in law Mike Rogers. The film depicts the other worldly events that took place in the woods of Snowflake, Arizona in November of 1975. After a long day of logging, Walton, Rogers and the rest of the logging crew head home late in the evening. During the ride home they experience a very large and bright light off in the woods beside their pick up truck. The already scared men slow down to investigate and Walton heads off on his own to see what the bright light may be. While getting closer to the object, Walton is zapped by a light beam or rather a ray that paralyzes, levitates and abducts him. He disappears and right after witnessing the event, Rogers and the rest of the loggers flee in terror leaving Travis behind. The men are then made suspects in Walton’s disappearance. No one believes them or the story they stick to about the bright light and the unidentified object in the woods. Five days later, after the authorities claim him missing and/or dead, Travis re-appears at a gas station and has very little recollection of what has happened during the missing five days. What happens next has become one of the most talked about stories involving a so called “Alien Abduction.”

Despite what Steven Spielberg would have you believe about benevolent aliens visiting the earth, it isn’t always so. In some of the more realistic and compelling films which involve aliens grabbing up humans we see a darker and scarier side to the abduction stories. Screenwriter Tracy Torme adapted the novel “The Walton Experience” by Travis Walton and set about spreading the tale of a very spooky abduction case involving a normal and average blue collar dude named Travis Walton. Robert Lieberman (Titanic, EarthSea) directs (with a very respectable and truthful flair) and brings to life  a story that disturbs and fascinates. Rightfully so, “Fire in the Sky” has garnered a huge cult following and is a favorite among many Ufologists, conspiracy theorists and lovers of “The X-Files” The movie has aged well and is still one of the better low key UFO movie entries out there. It is a study not so much about UFO’s  than it is a tell all about what happens when a small town turns against it’s own.

The ever watchable and slick James Garner is awesome to watch as the very “by the book” and analytical Lt. Franks Watters. His performance is level. sympathetic and lean as he gathers all of Walton’s friends and questions them about the night in question. Obviously they know nothing and the suspicions of the towns folk reaches a boiling point. There is even a town hall meeting with the locals and the accused alike and we know how town hall meetings can go. Lt. Watters goes through the motions diligently until he finds some things very curious about the story of the group. For one he comes across one of those UFO newspaper rags that usually claims that some woman had bigfoot’s baby and he begins to think that the men may have been embellishing the incident. He begins to suspect foul play. Only because all the evidence points to it. 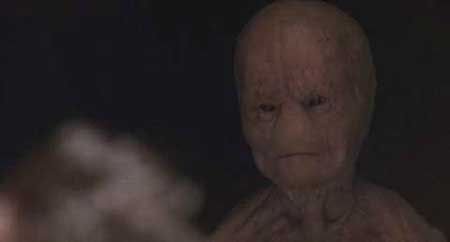 Five days go by and whammo! Here comes Walton calling out of the blue from a gas station, naked and babbling. He is just a huge mess and Sweeney elicits pity from his performance here as he seems to be at odds with everything that is going on. He doesn’t know how he got to the gas station much less recall the rest of the missing time. The film from here on plays out like the very best kind of interesting sci fi except it’s all true and very believable.

The scenes and events prior to Walton resurfacing was a peek into what happens when people who know they are innocent are forced to constantly plead their innocence. When Walton shows up then the tone shifts a bit into a kind of procedural into a post – abduction scenario. Robert Patrick is just all around perfect in this role as Mike Rogers. He is strong, shaken and very caring but he is forced to tell the towns folk to get bent since they have made him a type of pariah. He is even upset at Walton for getting out of the pick up that night and rightfully so. The rest of the logging crew is made up of recognizable actors like Henry Thomas (Psycho IV), Peter Berg and Craig Sheffer (NightBreed). They are questioned over and over again by Watter to no avail. They all have the proper screen time to get the movie moving at a good pace.

“Fire in the Sky” is not a loud, flashy, alien event film. It is geared more towards those who like to think things out from within the frame work of a serious UFO movie. I liken it a bit to “Communion” which is the grand poobah of alien abducion movies. It is heady and smart but I found it to be very emotional as well. Let’s talk about Walton’s flashbacks. This is the meat of the story. What the hell happened to him? We find out in horrific detail what befell him on the “alien craft” that snatched him up in the woods.

These scenes are involving, shocking and visceral. Walton is cocooned in the spacecraft and after he breaks free he is subjected to zero gravity. Lieberman disorients us during these very well staged scenes. We feel as if we are there with Walton as he suffers through some awful stuff. He gets put on a table and gets wrapped in a large funky rubber sheet. He is then put through painful examinations and gets poked in the eye. Ouch. To Lieberman’s credit he gives us some nasty and scary aliens that provokes deep down dread and menace. Sweeney projects fear so well that it had me cringing and looking the other way. Yes, it is that intense. 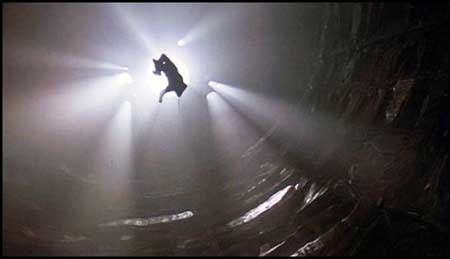 So, as a UFO alien abduction movie, “Fire in the Sky” works. It continues to impress as a psychological thriller as well. What really happened that night? Was it a group psychosis? Did they really see what the thought they saw?  Is this all in Walton’s mind or did he truly experience it? These are all good questions and the film never takes an easy way out until the somewhat contrived and anti-climactic ending which is quite ambiguous and confusing. It almost ends like a cliffhanger season finale of “The X-Files”  It ends quite suddenly and we are left trying to continue in our heads how this could have all play out and with my imagination being what it is, there could be a gazillion possible outcomes. 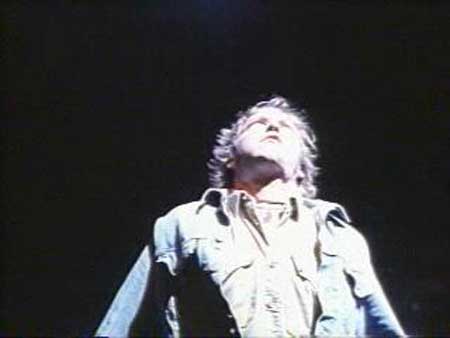 Do not let the ending stop you from watching this rather good, not great, sci-fi cult thriller that almost completely legitimizes the alien abduction scenario. Bill Pope (The Matrix and Spider Man 2) deftly creates mood and suspense with his very eerie lighting especially during the abduction and experimentation scenes. The score by Mark Isham (Point Break, Crash) is actually quite good and weaves an ethereal musical web over all the proceedings. It is no doubt that at least one viewing of “Fire in the Sky” on perhaps a rainy Saturday evening will most definitely have you closing the blinds but not before you look up and wonder what is really causing the lightning.