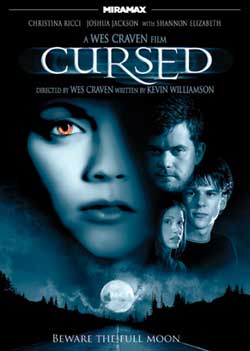 A werewolf loose in Los Angeles changes the lives of three young adults, who, after being mauled by the beast, learn they must kill their attacker if they hope to change their fate to avoid becoming werewolves too.

Wes Craven & Kevin Williamson had themselves a great time from the years 1996-2000. That’s when the duo created (& sadly ran into the ground) a new horror icon, that icon being Ghostface, who was the star of Scream 1-3 (& eventually 4 in 2011). Yeah…they had a fine old time giving ghostie a new set of teens to kill and a new face behind the now ubiquitous mask for each film. But what did they do inbetween Screams 1-4 huh? Williamson took his writing skills to TV mostly (Dawson’s Creek, Glory Days, Wasteland, Vampire Diaries) with an occasional foray into scripting features (Teaching Mrs. Tingle, I Know What You Did Last Summer, The Faculty). Craven continued directing features with varying degrees of success (Music Of The Heart, Red Eye) but they did reunite for one movie that a lot of you probably never heard of, a movie with a very troubled production history behind it, a werewolf movie of all things! A werewolf movie titled “Cursed”…apt title.

“Cursed” is about a brother, Jimmy (Jesse Eisenberg) & sister, Ellie (Christina Ricci) who while driving home one night get into an auto accident when their car’s windshield is cracked by something thrown at it. They spin out and crash into another car driven by a woman named Becky (Shannon Elizabeth). Their car manages to stay on the road but Becky’s car spins out into the nearby forest where it lands upside down. Ellie goes to try and help her while Jimmy tries to contact the police. Ellie can’t free Becky but Jimmy does manage to unbuckle her seat belt. Becky seems OK but just as she’s about to get out of the car something grabs her through the passenger side window, something big and hairy. Jimmy grabs on to her feet and tries to pull her back but only manages to get pulled along with her. Ellie grabs Jimmy’s feet to pull him back and she does but Jimmy can’t hold on to Becky and gets a really nasty wound across his chest for his trouble. 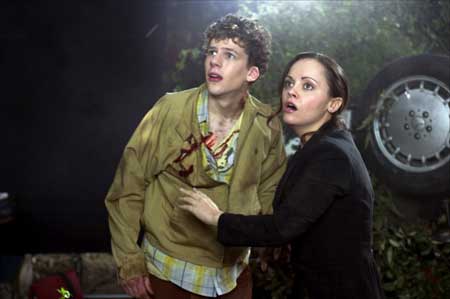 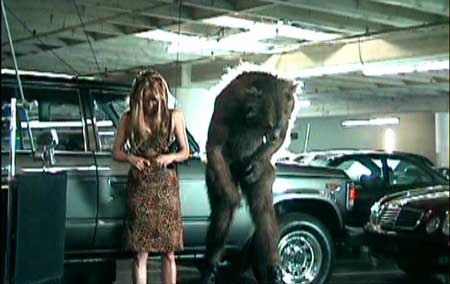 They run back to their car and can hear the police coming when suddenly something is hurled at them from out of the woods…that something being the top half of Becky’s body! Incredibly she’s still alive and manages to crawl a few feet before expiring then all of a sudden the creature that attacked her appears and sets itself on Ellie. She (& Jimmy) try to fight it off but Ellie gets bit by it before it escapes into the night. When the police arrive they try to explain that they were attacked by a large animal of some sort, a bear perhaps. But they both know that it wasn’t a bear that attacked them. It looked more like a wolf, a really big wolf. After a few days go by, both of them start noticing some subtle changes to their bodies & mannerisms. Jimmy does a little research and realizes that they were attacked (& bitten) by a werewolf and will soon undergo the transformation into werewolves themselves unless they can kill the creature that bit them. Yup…they’re CURSED!

Ellie works as a producer for the Craig “Where is he now”? Kilborn show (Kilborn has a cameo in the movie) and she has a boyfriend Jake (Joshua Jackson) who is working on opening a new night club called Tinsel. The club has a “Dark Hollywood” sort of theme to it and is filled with all types of figures from horror films, some of them from Craven’s own films (Freddie Krueger) among others. There’s also a cool hall of mirrors in the club that plays a part in the climax of the film. Jake is really busy working on getting the club ready for it’s debut which is in a few days but he is concerned over Ellie’s odd behavior & what to do about it. Meanwhile Jimmy is being bullied at by the jocks at his high school but as he begins to realize what he’s becoming, he starts to like it and has a surprise in store for his tormentors… 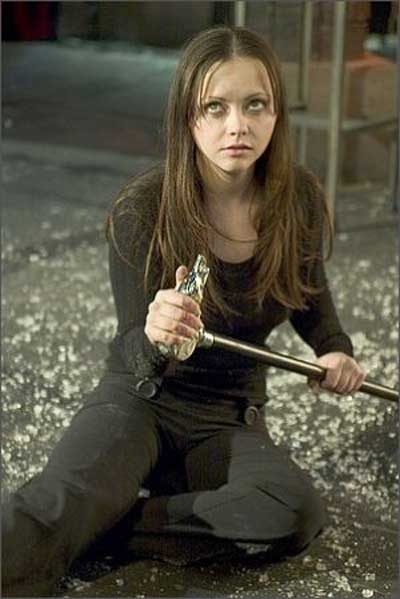 But what does it all mean? Hard to say because “Cursed” went through a lot of changes before it finally arrived to theaters. Rumor has it that up to 90% of the already finished film was reshot. Major characters played by actors like Freddie Prinze Jr & Skeet Ulrich were just cut right out of the finished film. At one point Craven just dropped out of the film altogether reportedly because Bob Weinstein (Chairman of Dimension Films) wanted a PG-13 rating for the film while Craven had shot it as a R rated film. I don’t know who created the PG-13 edit but it’s obvious upon watching it that the film is missing something. Characters appear and disappear just as quickly with nary a rhyme nor a reason (Portia de Rossi’s gypsy character is one example of this). Other characters, such as Jenny (Played by R n B ingenue Mya) hang around for a bit before they are knocked off but it feels like there was a lot of scenes featuring these characters that ended up on the cutting room floor. Indeed, this shoot did seem to be cursed for some actors…at least they got paid.

And it’s really a shame because “Cursed” as it stands isn’t too bad of a film. Williamson’s script tries too hard to be “Scream” with a werewolf instead of some kids with a mask but the script moves what’s left of the plot along pretty well. It became pretty obvious to me who the werewolf was after 30 minutes or so but although I was right, there was a surprise waiting for me that I didn’t expect. The principal actors (What was left of them anyway) all do their jobs well and were believable. There are some really bad edits in the film but since so much of it was cut a/o re-shot that’s to be expected. Ricci & Eisenberg don’t look like brother and sister but the affection they have for each other felt genuine to me. The werewolf itself isn’t really seen too much & the one big transformation scene was accomplished with CGI which just didn’t look very convincing (Which was why it took place in the dark I suppose). The practical werewolf suit seemed to change it’s appearance a few times as well and wasn’t very convincing no matter what it looked like but it was decent enough in small doses. 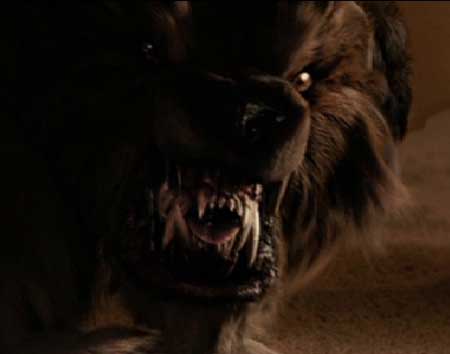 “Cursed” bombed at the box office but what did Dimension expect with all of the changes it went through? There is a pretty good movie in here somewhere but unless Craven gets the OK to put together a “Directors Cut” of his film we aren’t ever going to see it. And if he tried to integrate all of that lost footage the movie would probably be four hours long. He could probably craft an entirely different movie using the deleted footage, a better one perhaps. But this is what we got and while it ain’t “An American Werewolf In London” or “The Howling” it isn’t terrible, it’s just another slightly above average fright feature that could’ve been more. I’m rating it 2.5 out of 5 shrouds overall…I might have given it an extra half if not for Ricci’s amazingly wide forehead. Have you guys ever noticed that thing? You can land an airplane on it…

Cursed is now available on Bluray per Echo Bridge Entertainment