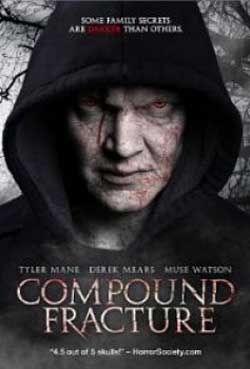 Michael Silna has just gotten custody of his only sister’s son after she was murdered by her husband before his very eyes. To fulfill his sister’s dying wish, Michael takes his nephew and wife and makes the journey home to his only other living relative: his estranged, eccentric (and extremely paranoid) father who is obsessed with building an unassailable compound. Once there, Michael hopes to repair his shattered family, but instead he finds that they are all trapped inside his father’s creation when the ghost of his vengeful brother-in-law returns to wipe out the rest of the Silna family.

Compound Fracture, honestly once I saw the title I was instantly intrigued. What type of movie would boost such a title, the only things that came to mind were blood, gore, and destruction. Then I sat down and stated to watch, and to my surprise it pits two of the most beloved slashers against one another, sort of. The movie stars Tyler Mane, Michael Myers form Rob Zombie’s Halloween remakes, and Derek Mears, Jason Voorhees from the Friday the 13th remake. Even without the make-up and customs, I like to think its Jason versus Michael. It’s good fun to see these two up and coming horror superstars take on one another, even if you already know who the winner was going to be.

The main focus of this movie is on the life long bond between members of a family, once you’re in you don’t get out. Michael (Tyler Mane) is a Wolffsen, a Norse sect that really knows the meaning of family, everything right down to getting part of the family crest carved into their forearm. When Michael had his chance he broke away from his family trying to keep his distance for as long as he could. But now he is finally going back to tell his father the news that he is engaged to his soon to be wife, Juliette (Renae Geerlings). If she looks familiar to you it might be because she also played Deputy Gwynne in the Halloween 2 remake, and is also Tyler Mane’s real life wife. It’s not just the two of them on this trek back to his family’s compound, as Michael is now the legal guardian of his nephew Brandon (Alex Saxon), after a horrible murder committed by Brandon’s father, William (Derek Mears). 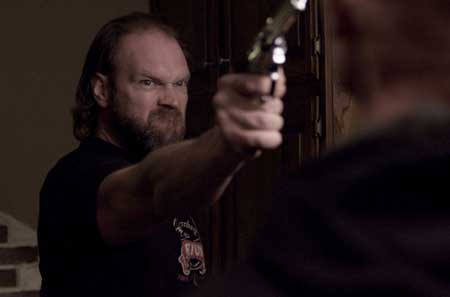 The closer to the compound the three get the more trepidation Michael has about setting foot in his childhood home, lashing out on both his wife to be and his nephew that he doesn’t seem to want to have anything to do with. Once they arrive Michael notices that the old house has had a few upgrades, mainly all the surveillance cameras, not only around the perimeter of the house but in all the rooms as well, and also strange symbols drawn everywhere. The first encounter between Michael and his father, Gary (Muse Watson), is less then heartwarming as Michael still harbors deep resentment for the man.

Now that the family is back together strange occurrences around the house start to happen. Items start to move, and people can been seen moving inside and outside of the house. Now the guests have to try and determine what’s real and what’s just in their minds, and how the mark on their arm relates to it all.
For their first time writing, both Tyler Mane and Renae Geerlings do a good job with a truly eerie story that comes alive with the help of some great horror veterans. Between all the main characters Alex Saxon is the only actor to not have been in a horror movie before portraying his role. This all adds up to good acting that transitions you into the story at hand. My personal favorite was Muse Watson as the father Gary, his character’s mind seems to be fading and he continues to confuse his current wife for his ex-wife and Muse does a great job with it. 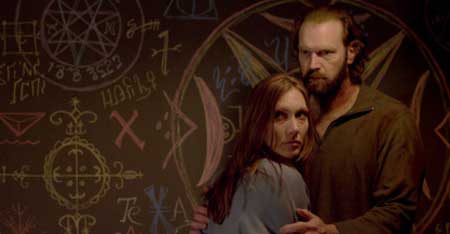 The one big thing that bothered me, and it’s more of a personal preference then an actual complaint about the movie, but if Tyler Mane wrote the script for a movie that he knew he was going to star in, then why name your character Michael? For the purpose of the movie he could have called his character by any name and still have had the same affect. It’s just weird to see Tyler Mane on screen and people yelling for Michael to help them, instead of begging him not to kill them. 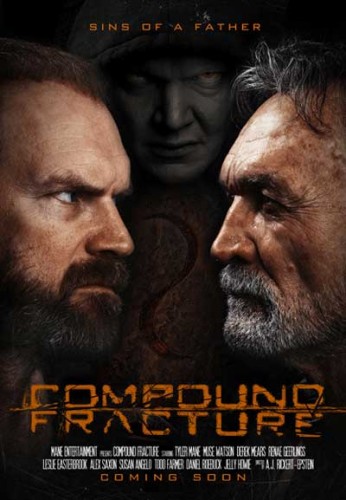 In the beginning of this review I mentioned my expectations for a movie with the name Compound Fracture, and let me tell you that there isn’t much blood, any real gore, and little to no destruction, but the name does fit for the title of this movie. They do have a flashback scene that makes a connection between events in the movie and the title, and a scene near the end that I think was supposed to have an arm getting a compound fracture, but it’s kind of hard to tell.

With Mane’s first attempt at writing a horror movie, successfully in my book, I can’t wait to see what else he might have in store. This movie isn’t wall to wall gore or action, and there are some slow parts while setting up the story, but it’s one that’s definitely worth a watch.