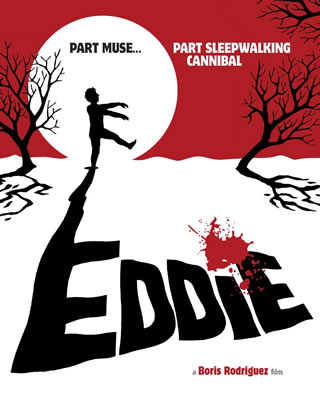 Lars (Thure Lindhardt), a struggling painter, resorts to getting a full time teaching position when he suffers from a mental block prohibiting his creative side from producing his next masterpiece. He ends up taking residence is a secluded countryside at a small school. There he meets Eddie (Dylan Smith), a mute that is under the school’s care but without a place to live, and strikes up an instant connection with him. The leaders of the school decide Eddie should move in with Lars, at least temporarily. Lars, eager to make a strong impression, agrees. Lars humors Eddie and they become friends; but, one night, Lars discovers Eddie has an odd disorder causing him to kill and eat small animals while he sleepwalks. When Eddie learns of the troubles Lars encounters with townsfolk and unfriendly neighbors, his nightly ritual becomes increasingly horrific as he begins killing and eating other people. Instead of being horrified, Lars is inspired by Eddie’s nocturnal habits and produces a series of highly sought after paintings. Lars must decide to reveal Eddie’s diet or keep him safe as a nightmarish muse putting himself, his new found friends and the townsfolk in jeopardy.

Director Boris Rodriguez and writers Alex Epstein and Jonathan Rannells are the talents behind the wonderful film Eddie, The Sleepwalking Cannibal. The film is a horror comedy where one of the main characters suffers from an over zealous diet while sleepwalking across the countryside. The more agitated he becomes the bigger the appetite. But that is not the bigger picture here, the film is more interested in telling the story of Lars, the painter turned teacher struggling with his own inability to create and paint. Eddie becomes his muse, the more he kills, the more Lars can paint. Disorder feeds disorder and it is heartbreaking because Rodriguez gives the audience two characters they can actually give a rat’s ass about. The film never loses its sense of humor nor its purpose. It also never shies away from the blood and guts that come along with the inclusion of cannibalism while they maintain the correct amount of restraint to keep the film from becoming ridiculous. It is a tremendous effort and a successful, if flawed, film that will most likely be overlooked due to its ill-chosen title.

Part of what makes Eddie, The Sleepwalking Cannibal so successful is the fascinating relationship between Lars and Eddie. Even without the horrific elements, the characters are strong enough to support a feature film. The actors make the most of the pairing. Thure Lindhardt allows Lars to be a jerk at first, struggling to adapt to Eddie’s behavior and unique communicative skills. What comes across as selfish and self-centered at first grows into a bonafide affection for his mute friend. Lars is a complex character. Eddie becomes his muse, and a whole lot more, along the way. Dylan Smith gives Eddie a quiet innocence with a hint of a malicious nature bubbling just beneath the surface. There’s something going on behind the inexpressive face, sullen eyes and quiet demeanor. He’s a calm before the storm. How each protects the other, reacts to the other and drives the others motivations is unique to Eddie, The Sleepwalking Cannibal. Behind the laughs and the screams is a touching buddy story.

Eddie, The Sleepwalking Cannibal is described as a dark comedy and it is funny (at times); but, this is only a fraction of what makes this story work. It isn’t a horror comedy in the way a Shawn of the Dead is or Fright Night or Attack of the Block. It is more akin to Tucker & Dale vs Evil but without resorting to slapstick and including a heavier lean toward the dramatic, much heavier. The scares are few and far between but the blood and mayhem are prevalent delivering on the promise of the titular reference to cannibalism. As Eddie’s appetite grows so does the dread that his meal will include the wrong person. The fact that Lars is capitalizing on Eddie’s hunger is as horrific as Eddie’s nocturnal dining habits. It’s to the film’s credit that by the time Lars becomes the film’s true villain and Eddie returns to confront him, that the audience does not want the inevitable to happen, even when either conclusion is justifiable – both Eddie and Lars cannot survive the outcome, one or both must die.

The film has a good time with its gore and special effects without getting too gross or outrageous – when it easily could have. Eddie becomes a full fledged cannibal during the film, but is never presented as a flesh eating ghoul ala George Romero’s Dawn of the Dead. This does not mean there isn’t ample amounts of blood and dismembered body parts. The film opens with a disturbing accident as Lars runs into a deer just as he approaches town, however the deer is not immediately killed – an ominous and effective start to the film. Lars decides to end the creature misery with the only weapon available, a nearby rock, attempting to smash the animals head in, repeatedly. He fails miserably. The film continues with this personal approach to its horror and gore with Lars first discovering Eddie with a small, partially devoured critter and, later, with Lars finding the remains of Eddie’s first decapitated and mangled human victim. The film isn’t afraid to show what it has to but has the restraint of not going too far which keeps the film balanced to its emotional core. It’s a fine example of using a healthy amount of gruesome to build on a solid story. 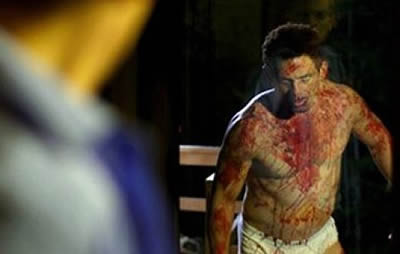 The film overcomes its ridiculous title with a surprisingly inventive and emotional story about friendship, desire and fear. Using a healthy dose of horror and cannibalism, Eddie, the Sleepwalking Cannibal evolves into a character driven story about friendship, inspiration and responsibility. Lars and Eddie are a modern day Charlie and Raymond Babbitt, except Eddie like to eat people and is not as good with numbers. Still the tie is as strong at its core and provides the film with its heart. The film isn’t afraid to get messy and have fun along the way displaying a unique sense of humor. Regrettably the title suggest something a little more preposterous than the film is willing to deliver and will likely misfire with many viewers’ expectations; however, if given the chance, Eddie, the Sleepwalking Cannibal will entertain its audience as much as Eddie inspires Lars to paint his next masterpiece.