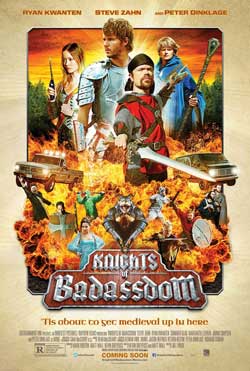 Live-action role players conjure up a demon from Hell by mistake and they must deal with the consequences.

This flick was shot/completed over 3 years ago and has gained a near mythic reputation since then. Every fanboy/geek worth his/her salt has been waiting for it and it’s just seeing (a very limited) release now and it’s available on VOD as well. But is it really worth the long wait?

Scripters Kevin Dreyfuss and Matt Wall put together a pretty cool idea for this movie. A group of LARPers (Live Action Role Players) have gathered together to hold a large scale medieval campaign in a forest. Eric (Steve Zahn) has brought along a book of spells that he uses in a game he plays with his friends Joe (Ryan Kwanten) & the awesomely named Hung (Peter Dinklage). Eric & Hung are planning to cheer Joe up after a breakup with his girlfriend Beth (Margarita Levieva) so along with the LARP’ing there’s gonna be some serious drinking and ingesting drugs. But Eric accidentally summons up a bloodthirsty succubus (that looks just like Beth) and the guys have to figure out a way to destroy it before it turns the Fields of Evermore (The moniker given the forest where the LARP’ers are gathered) into the Killing Fields! 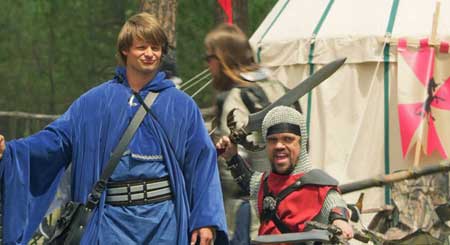 A big problem here is that the film takes awhile to get started. So much so that when it finally does get to the good stuff you might just be nodding off. There’s no problem with trying to establish some character backgrounds and make them more endearing but in a film like this it sort of defeats the point. We already know that these guys are really close friends 10 minutes into the movie so beating us over the head with it defeats the purpose. And the expected laughs are few & far between in the early going which actually depressed me just a bit, I expected some real guffaws and barely cracked a smile early on. The film does get funnier as it progresses and with teams called “Gnomeland Security” & “The Norse Whisperers” the laughs come quicker as the film continues. The idea of switching normal words with vernacular straight out of medieval times is initially cute but I got weary of it pretty quickly. 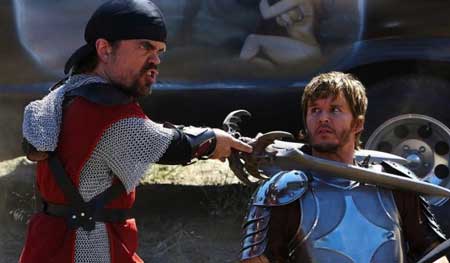 It all culminates with Eric, in an attempt to banish the succubus back to hell, accidentally transforms it into a 10 ft. tall demon. And the demon is having a grand old time slaughtering everyone around him. It’s an impressive creation (By Spectral Motion) and what makes it even cooler is that it’s all done using practical effects, no CGI needed. I really appreciated director Joe Lynch’s idea to go practical with the creature, it’s a truly menacing looking beastie indeed. The gore kicks into overdrive once the demon arrives although earlier scenes with the succubus ripping hearts out of chests are pretty gruesome, but the demon really gets to the nitty gritty when it comes to eviscerating his victims. 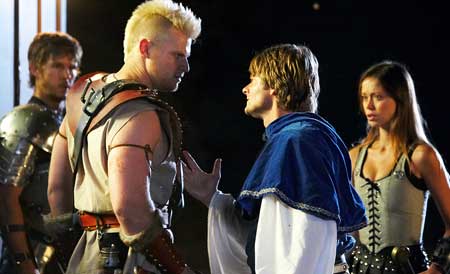 But in the end the film just doesn’t come together as a whole. Apparently it sat on a shelf for years because of a dispute between Lynch and some of the producers after they decided they didn’t like his final cut of the film, so they went ahead and cut their own version instead. I have no idea what Lynch’s cut would’ve looked like but I can say that this version feels pretty slapdash with scenes that don’t seem to connect and a lot of bad jokes strung together in an attempt to get the audience laughing. The film just doesn’t flow as smoothly as it could’ve and it feels drawn out & choppy. All performances are good though and Dinklage is obviously having a ball waving his foam sword around (oddly enough this was completed a full year before he got his role in Game Of Thrones). Kwanten and Zahn are believably goofy too. Summer Glau is also featured as Gwen (Guinevere…duh) and while she’s pretty good it’s patently obvious that she’s gonna end up with Joe at the end so her role is essentially eye candy and nothing more. 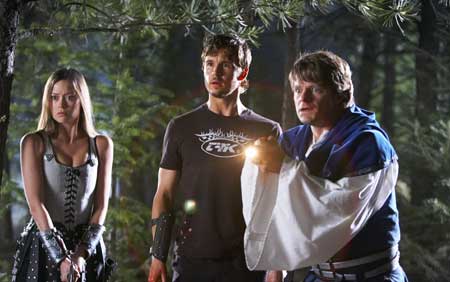 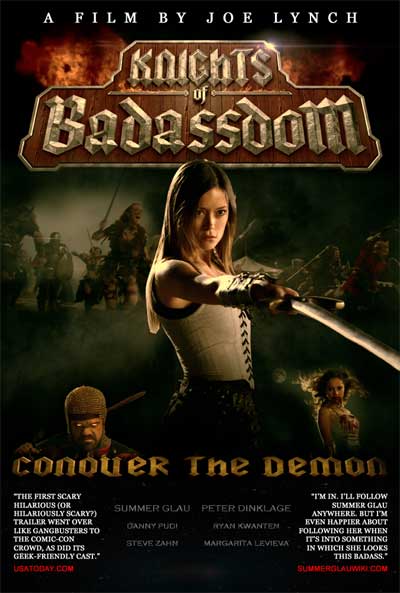 I so wanted to like this movie! I’ve read so much about it and I’m a big fan of Lynch as well so I figured that this was gonna be a no brainer, but its just not that good. It meanders when it should be moving and once it begins to move the movie is nearly over, to be honest I sorta felt ripped off by it. Again, I understand that this is the producers cut and Lynch’s cut has got to be better but I can only comment on what I’ve seen. And what I’ve seen is a mediocre action/adventure that features neither of those for a large part of its running time. Knights Of Badassdom had a boatload of potential to be something epic but as it stands it’s just a series of skits linked together by the slimmest of threads that just doesn’t work.

Knights Of Badassdom – 2 out of 5 shrouds.