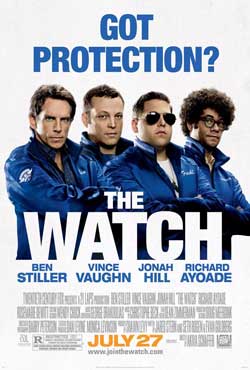 Four everyday suburban guys come together as an excuse to escape their humdrum lives one night a week. But when they accidentally discover that their town has become overrun with aliens posing as ordinary suburbanites, they have no choice but to save their neighborhood – and the world – from total extermination.

I am not a big fan of comedies. I am even less of a fan of comedies that have some type of supernatural or extraterrestrial component added to them. Besides “Ghostbusters” & “Evolution” (I actually liked that movie) I find that films that try to mash up elements of comedy & horror/sci-fi end up not really knowing how far to go in either direction, they’re either too funny to be scary or too scary to be funny. It’s a very fine line to tread but here we are this summer with “The Watch”, Hollywood’s latest attempt to mix comedy & science fiction and while it’s not as bad as I thought it was going to be (The trailer wasn’t very exciting to watch), it didn’t change my mind regarding the viability of films that attempt to meld the two genres together successfully.

“The Watch” stars Ben Stiller as Evan, the general manager at the local Costco superstore in the small suburban town he lives in with his wife. Evan is the kind of guy that always seems to want to be everybody’s friend. He is the president of the local running club, Spanish club, etc…He makes it a point to try to get to know everyone he meets and as the film opens he narrates his desire to be somebody that the whole town can look up to. He also manages to let the audience know that he has friends of Indian, Asian & Hispanic descent but he’s still looking for an African American person he can buddy up to. As he closes up the store one evening he is delighted to find out that the night watchman, Antonio (Joe Nunez) has passed his citizenship test and is now an official American citizen. Antonio even has a new tattoo celebrating the event on his arm that hasn’t quite healed yet. Evan says his goodbyes and leaves Antonio to his work. Antonio celebrates by drinking some vodka, smoking some weed & watching a movie in a recliner when he hears a noise coming from inside the store. As he clumsily attempts to find out where the noise is coming from he realizes he is not alone and he draws his revolver out threatening to fire when he suddenly sees what’s making all the noise. He fires several rounds into whatever is chasing him as he tries to make it out of the store but he’s suddenly grabbed by somethingand all that’s left of him is an extremely bloody smear across the glass door he was trying to open. 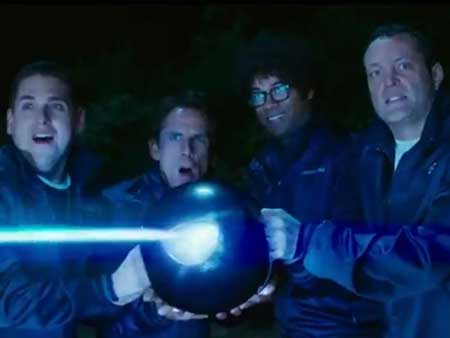 The next day Evan arrives at work to find the store surrounded by the police, ambulances and news crews. He identifies himself to Sgt. Bressman (Hilariously played by Will Forte) who tells Evan that Antonio is dead, his skin seemingly ripped from his body by some wild animal as far as the police can surmise but since there are only eight policemen in the whole town they’re woefully understaffed and don’t seem to be equipped to find out who the murderer is. Evan is understandably devastated at this news and decides to form a neighborhood watch crew that would help the police keep an eye on the streets after dark but most importantly help identify Antonio’s killer. He puts up some fliers around town and gets exactly three volunteers to join the watch. Bob (Vince Vaughn) who owns a local construction company, Franklin (Jonah Hill) a High school dropout who failed every exam necessary to join the police force & Jamarcus (Richard Ayoade) who describes himself as recently divorced and new to the neighborhood. The three of them have different ideas of what joining Evan’s team will actually entail though. Bob thinks it’s a good excuse to hang out with the boys & quaff beers. Franklin sees it as more of a militia and is anxious to get down & dirty and Jamarcus envisions being able to get oral sex from lonely Asian women who hear sounds late at night. Evan is the only one who takes it seriously and has his hands full trying to get the others in line as they officially begin their watch. 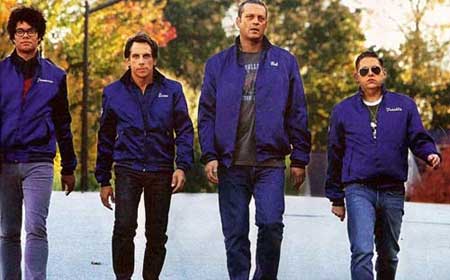 As the film proceeds we find out a bit about the backgrounds of all four of the members and each of them have some skeletons in their closets that come to light later in the movie. As these little bits of information come to light the four of them actually become friends who start to care for each other. Which is good news because Antonio wasn’t ripped up by any wild animal, he was attacked by an alien that ripped his skin off to use as a disguise to blend in with humans, and he isn’t alone.

So what we have here is a fairly standard “Aliens amongst us” film that endeavors to lighten up the proceedings with some broad comedy tossed into the mix. What’s surprising is that for most of the time it succeeds in making us laugh as the situation grows more dire for our boys with the matching jackets. Although the script is credited to Jared Stern & Seth Rogen I believe that the cast was ad libbing a lot of their dialogue. Jonah Hill is particularly hilarious and most of his lines didn’t feel scripted to me. All four of the leads have a wonderful rapport and this leads to some extremely funny bits as they start to riff off of each other (I can already envision the DVD release having an extended blooper reel of the four of them just cracking each other up). But if you’re reading carefully you’ll see I said it works “Most of the time”. The biggest problem I have with the film is that it truly cannot decide what it wants to be. It lurches from some very “R” rated comedy scenes to some very “R” rated sex/nudity scenes to some extremely bloody scenes of violence and also tries to be something of a “Buddy” film as well. The movie changes pace so often that eventually the various set pieces seemed to be coming from different films haphazardly edited together without much coherence.

The sex & violence quotient was especially dismaying to me. There is one scene that involves a large group of people in the midst of an orgy that leaves nothing to the imagination and while it is very funny I’m positive that there will be some parents that bring their children to see this movie not realizing that it’s rated “R”. The film is also pretty violent and the aliens have no problem spilling human blood cross the screen. The creatures reminded me of the Mugwumps from David Cronenberg’s “Naked Lunch” in their design, only they are really mean f*ckers who have nothing less than world domination on their mind. And on top of everything else it turns into something of an action film in it’s final third which while exhilarating does nothing to make the film any more coherent. It’s not a film for the kiddies acolytes. 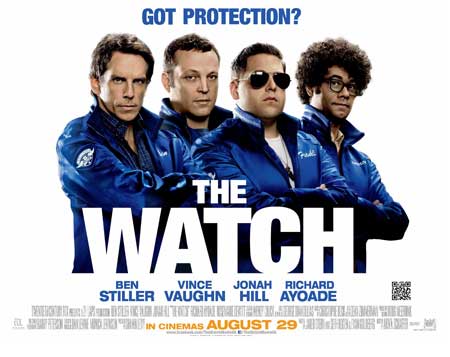 Happily all four of the leads are excellent and seem to be having a very good time working together. The chemistry between them helps to make the film a lot easier to enjoy and they are all extremely funny. Actually everyone in the movie is really funny and as a comedy the film is aces high. But when you add the excessive violence & sex it gets very messy (I can’t believe I just said that excessive sex & violence in a film is bad)! I guessed the plot twist 1/3 of the way through the film and you should as well. It’s really pretty obvious once you think about it so don’t expect to have your brain cells taxed either.

The film was originally titled “Neighborhood Watch” but that was shortened to “The Watch” after the Trayvon Martin tragedy. And this was a good move on the studios part because there is a large amount of gun play in this film and that already serves as a reminder of what happened to Trayvon. I do believe there would have been a nasty backlash if 20th Century Fox had stuck with the original title. The Black Saint is giving “The Watch” 2 1/2 out of 5 shrouds, it is (At times) a very funny movie that will have you laughing out loud but the excessive violence & unnecessary nudity will turn off some viewers and actually might horrify some youngsters. It’s rated “R” for a reason people so keep the kids at home. 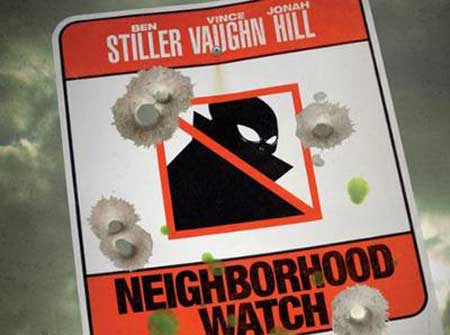