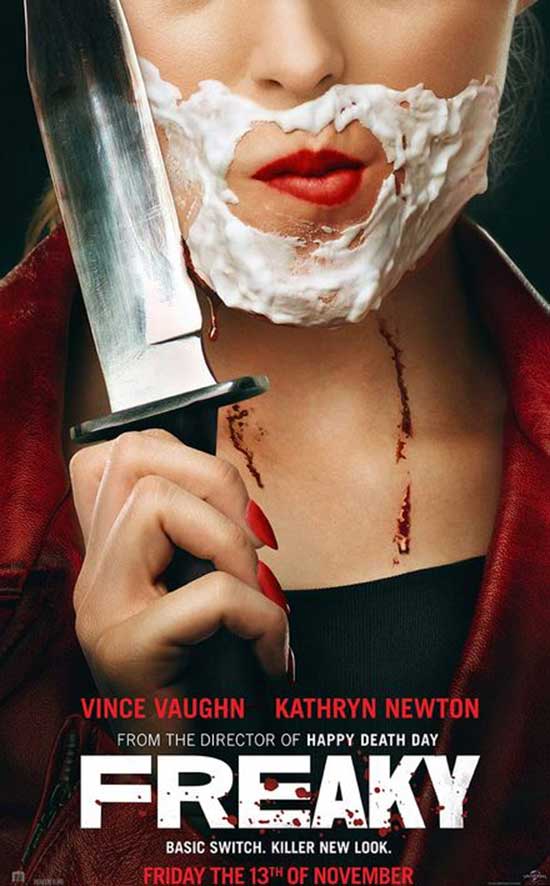 After swapping bodies with a deranged serial killer, a young girl in high school discovers she has less than 24 hours before the change becomes permanent.

There’s been countless iterations of the Body Swap trope. It’s a basic setup with limitless potential. Show your two characters’ lives, swap them up, shenanigans ensue, they learn about themselves/arc, and return back to their original selves all the better for the “Freaky Friday” event.  As to how good the aforementioned shenanigans are, is all up to the skill of the writer. Fortunately, Freaky was gifted with a decent enough script to make it a thoroughly enjoyable Horror Comedy. 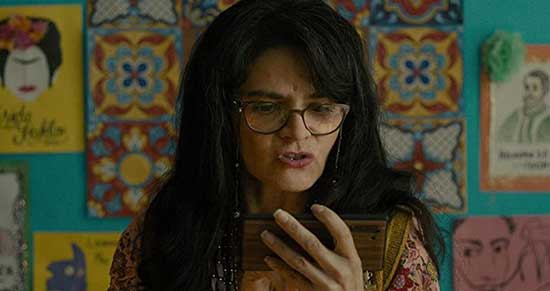 Millie (Kathryn Newton) is your typical shy teen who’s overlooked by everyone at school. Coddling her somewhat recently widowed, and verging alcoholic mother, Millie is too plain for boys to notice and too easy for the mean girls to pick on. When legendary serial killer, the Blissfield Butcher (Vince Vaughn) targets Millie and tries to kill her with a mythological Aztec knife, he unknowingly causes a Freaky swap, leaving Millie inside the aging killer’s body and the Butcher inside her frumpy form. This is a dream come true for the Butcher as he now has unfettered access to a high school full of body count, whereas Millie is on the run from the law, desperate to convince her friends to help reverse the swap before the end of the day.

Freaky was a lot of fun. Right from the get go, you know writers Christopher Landon and Michael Kennedy were enjoying themselves dreaming up the inventive kills and paying homage to slashers of yesteryear.  Just like Christopher’s previous foray into the comedy horror genre, Happy Death Day 2U, or Groundhog Day with a knife, Freaky nods to horror genre tropes without being too blatantly self-aware.

Though the body count was low, the inventiveness and gore easily made up for the numbers. Definitely quality over quantity here. With a solid script, there really wasn’t the need to rack up the body count as the characters, dialog, humor and fun was strong enough and consistent to keep you engaged the entire runtime. There were no dull moments here; every scene had a purpose.

This could have easily gone the other way. The typical girl in a man’s body/man in a girl’s body jokes were touched on enough to satisfy the obvious, but not enough to become a bore or gratuitous. The comedy was prevalent enough to entertain, and entertain it did, but not saturating as to diminish the horror. Don’t get me wrong, I LOVE Comedy Horror, it’s my favorite genre, but Freaky worked much better as a Horror Comedy and the balance was juuuuust right. 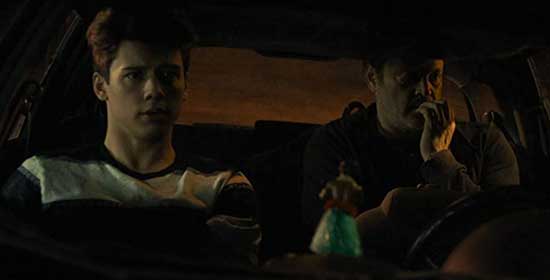 I did have some issues though. The 3rd act’s red herring was so blatantly obvious, it felt like a cop-out to a more intelligent climax and was a bummer considering how well everything was up until that point. Also, though Vince Vaughn was great when acting as Millie inside his body, for the most part, I felt that a little too often Vince went into “what does a grown man think a teenage girl acts like” mode rather than how Millie would act like, resulting into an over-effeminate re-enactment of her character.  Remember Bill and Ted’s Bogus Journey and the scene where Ted totally possessed his dad? Now, remember the fat guy Bill jumps into? That dude from Total Recall? Remember how he over-acted Bill? Sticking his arms and fingers out like he had some kind of arthritic disfigurement? Vince kind of does that, but with an over-effeminate running gate, voice and mannerisms, and not so much the ridiculously stupid hands.

Kathryn Newton didn’t have much to work with as the Butcher, but she did her best Jason Voorhes and was convincing enough. Freaky is more a Vince Vaughn vehicle. Apart from the obviously stereotypical mean girl and jock characters, everyone else was authentic and made the story much more enjoyable. And when the story went slower and softer, it felt organic and not shoehorned. 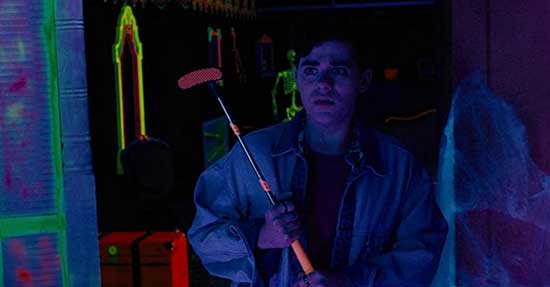 It’s no Tucker & Dale vs Evil, but just like that masterpiece, Freaky knows exactly what it is and wears that proudly on its blood-soaked sleeve… while also suffering from a pretty lame climax. Regardless of this minor gripe, it’s a fresh take on the Body Swap trope with engaging characters, some moments of heart, intelligent, fresh comedy (for a horror) and graphic gore, I think Freaky is a great addition to anyone’s horror watchlist.

4 out of 5 tennis racquets