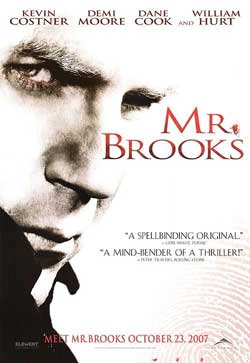 A psychological thriller about a man who is sometimes controlled by his murder-and-mayhem-loving alter ego.

While gore for fear sake certainly does have a place in film, psychological horror stands alone, typically being considerably much more frightening and leaving a lasting impression. When the film is loaded with some of Hollywood’s best actors, this aspect is emphasized even more. Hitchcock was a master at creating that increasingly tense feeling deep within the screener, and now director Bruce A. Evans (while certainly no Hitchcock) has shown that he too has some of the very same makings. 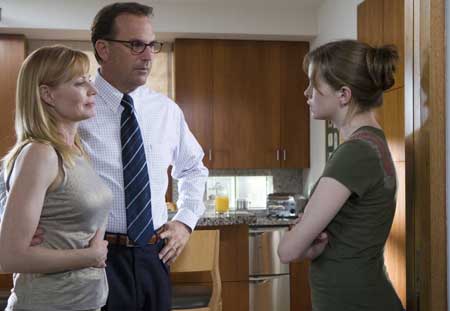 Earl Brooks (Kevin Costner) is an exceptionally smart man, a family man, a community respected man, and a murderer known only as the Thumb Print Killer – due to the leaving of a single bloody thumb print(s) of his victim(s) pasted somewhere nearby. But, he isn’t your typical killer. Compelled and pushed by his slick, and sometimes humorous, alter ego Marshall (William Hurt), who imaginatively lingers nearby, Brooks pursues his secret addiction with exceptional skill, constant care and careful planning. He’s did this many times before and is typically and meticulously cautious to not leave a single clue…until a time comes when he murders a carefully sought out copulating couple immediately prior to noticing that the window drapes are open and inadvertently becomes photographed by the across the way voyeur neighbor, a mechanical engineer by the name of Mr. Smith (Dane Cook).

However, Mr. Smith isn’t frightened or appalled. On the contrary, he is enthralled and blackmails Mr. Brooks, wanting to be involved and feel the expected intense rush of killing. Brooks has no option but to agree, and so begins a no holds barred psychological war between Smith, Brooks and Marshall, each attempting to judge what the other is thinking while trying to fulfill their quest.

Meanwhile, Tracy Atwood (Demi Moore), a tough as nails and witty, very well to do detective has problems of her own. While not only striving to crack the Thumb Print Killer case, she is also chronically battling divorce proceedings from her former adulterous gold digging husband, being pursued by an escaped former inmate vowing revenge, and getting pressured from the higher ups to turn the case over to the FBI. But, she’s not a quitter. 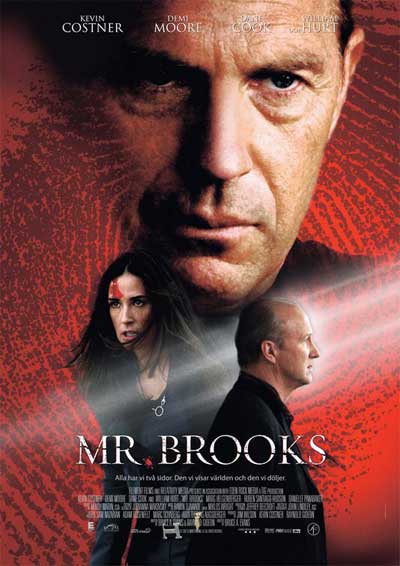 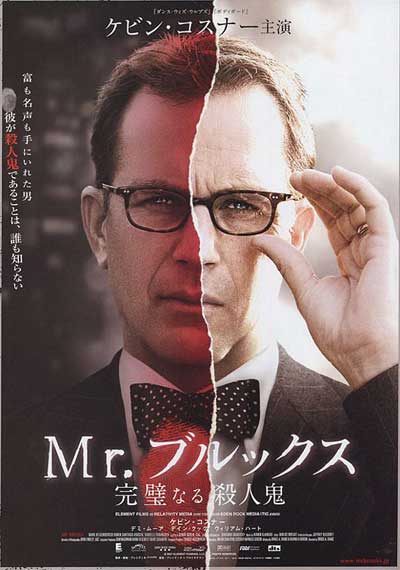 Enter Brooks’ daughter Emma (Marg Helgenberger), who comes home from college with the ploy of wanting to learn the family business, but in actuality has dropped out and neglected to disclose that there was a horrendous murder on campus, one in which a damning piece of evidence, the murder weapon, a hatchet, was left at the scene. When detectives show up to question Emma, Brooks feels the heat and realizes that she suffers from the very same affliction that he does…the need to kill.

After wrestling with the potential repercussions of Emma’s crime, he, once again as he always had, covers her tracks and travels impromptu, effectively disguised, to her former college campus to commit a murder using a replica hatchet in order to lead the police astray. His plan works quite well and since Emma has a solid alibi and wasn’t anywhere near the vicinity of the most recent killing, she is no longer a suspect. 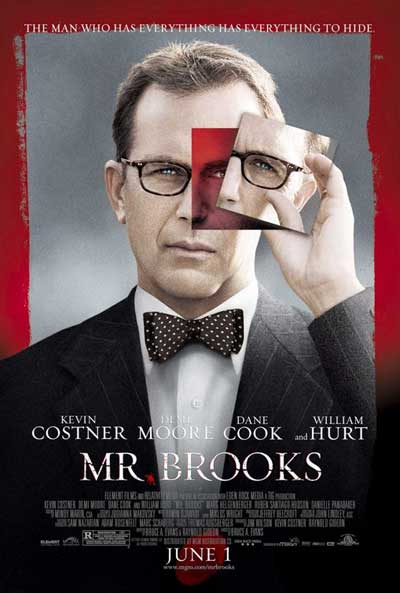 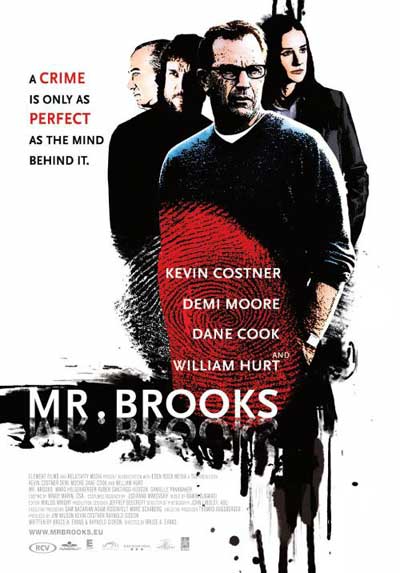 In the meantime, Smith is growing increasingly anxious and obviously disturbed, thinking Brooks is purposely avoiding taking him on the demented journey and threatens Brooks with public disclosure if he doesn’t follow through. Brooks takes Smith out to seek a potential victim, even allowing Smith to select the unfortunate. But, Mr. Brooks has another plan in mind a plan that will rid him of his recent parasite.

Wildly wicked, deliciously demented and superbly suspenseful, Mr. Brooks is a serial killer’s murdering version of Fight Club. Fast paced, believable dialogue and emotionally packed, the twist and turns are plenty, keeping the viewer guessing all the way to the explosive very end. 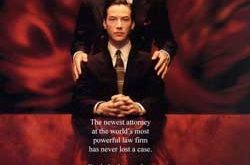