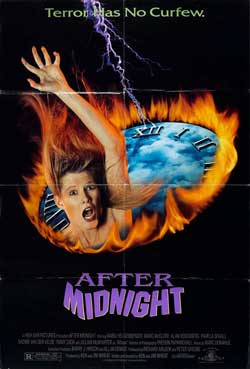 Horror anthology about a college professor (Zada) teaching a course called “The Psychology of Fear”. He brings his students (including psychic McWhirter) to his home, one dark and stormy night to tell scary stories. The first involves a young couple whose car breaks down by an old, abandoned house. The second has four trendy teenage girls getting lost in a bad part of town, and chased by a pack of vicious dogs. Last, we have Helgenberger confronting a stalker at the answering service where she works the night shift.

Following the success of George A. Romero’s Creepshow in 1982, horror films were given a new formula for success: instead of presenting a full length film with one plotline, a film would be broken up into a series of 20-30 minute vignettes, all of which would be scary in different ways. This method allows stories that might not be able to sustain themselves for a full feature to have a place in a ghoulish package with other suitably short stories. This type of horror film has been done both well and poorly, but none (that I have seen) has been quite so dreadful as After Midnight (1989). 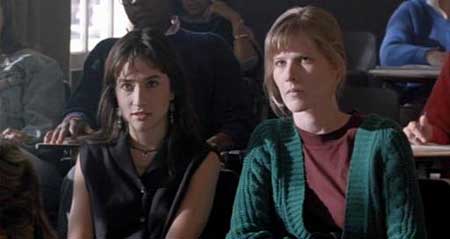 Written and directed by Jim and Ken Wheat, After Midnight serves up three solidly “meh” stories woven together with a genuinely silly overarching plot. What makes the film definitively weak is the acting, particularly by Ramy Zada, who plays mysterious college professor Dr. Edward Derek. The film begins with students entering Dr. Derek’s class Psychology 102… also known as the PSYCHOLOGY OF FEAR! (bum bum BUUUUM!) During the class’ first meeting, Derek informs the class that fear is the most interesting sense because it causes humans to act in their most pure form, and furthermore, the only way to understand fear fully, you must experience it first had. He then proceeds to hold a student at gunpoint (making the kid wet himself) in order to further prove that everyone experiences fear. Though they eventually take a backseat, Derek’s tropes about how incredibly interesting fear is are the most hilariously bad parts of the film. Zada is the type of actor conveys gravitas by… speaking slowly… and… looking creepily deep… into your eyes. Whenever he is on screen, the movie is more ridiculous. 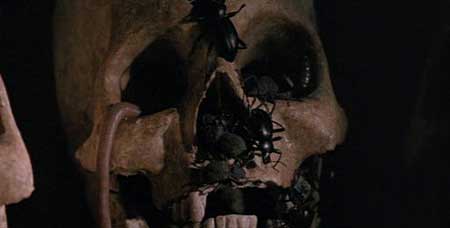 Dr. Derek is informed by the school administration that he can’t be such a weirdo in class, which he then counters with inviting the “most adventurous” of the students to meet him at his house for a private seminar. This is where the meat of the film lies, where Derek and the students hang around and tell each other “potentially true” stories in order to scare each other, each of which is a vignette. “The Old Dark House” tells of how a couple get a flat in the woods and have to enter an old deserted mansion in order to try and find help. “A Night on the Town” is the story of four girls who get lost in a bad part of the city, and proceed to be sexually assaulted by a deranged homeless man and his bloodthirsty dogs. Finally, “All Night Operator” is the story of a female call center worker has to deal with an actress’ obsessed fan only to find herself to be the subject of unwanted attention. 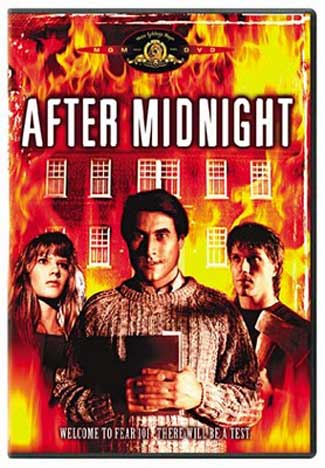 “The Old Dark House” is a decent story, even if it isn’t particularly scary. The other two vignettes, while they may be somewhat scary, are bad. Why, you ask? Both “A Night on the Town” and “All Night Operator” prey on women’s fears of being stalked and sexually assaulted (this does not apply to the portion of “A Night on the Town” where the dogs are the primary culprits). Certainly it could be argued that many horror films employ the strategy of using real life situations to make stories more plausible and in turn, more frightening. I will not contend this. That being said, if the only thing that a film has going for it is taking advantage of women’s fears of unwanted male attention, it needs to be called out, and that’s very true of this film. After Midnight is weak on acting, writing, camera work, and editing (god, the transitions!). It doesn’t have anything going for it, except for maybe the ending, which was so ridiculously stupid I actually started laughing. That’s not enough reason to watch this movie though. I cannot in good conscience recommend this film to anyone. 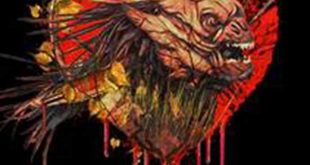 *NEW CLIP* AFTER MIDNIGHT Directed by Christian Stella and Jeremy Gardner, In Theaters and On Demand 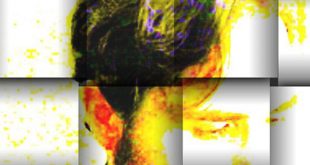 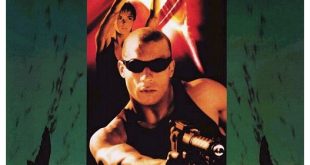