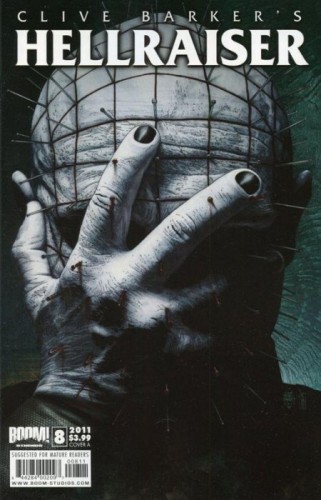 Are you all ready for the biggest Hellraiser shock yet? This issue takes you into a new direction we suspected but didn’t assume we’d ever see. With Kirsty now in Hell’s dominion and intent on keeping her promise, she is put to the test and transformed into a female version of Pinhead. Yes, the kind has moved on (though I still suspect more diabolical things from this former priest of hell). As Pinhead proclaims” let us begin”, Kirsty gets her head shaved per scalpel, pin stabbed per a series of demonic tentacles and reborn into a white-robed new vehicle for suffering. And what to make of Pinhead? His flesh stripped bare and suspended for Kirsty’s amusement, she inflicts the ultimate suffering upon him.

Kirsty who assumed her loved ones would be returned to her gets her promise but not in the fashion she phantomed. 4 previous loved ones emerge, but from this returning they also emerge as full fledged demons more hideous than the next. “Harrowers” as they are now called, now summoned at the hands of Kirsty to tear Pinhead to pieces.

Though Hell’s functions operate a bit different, as we find that Pinhead has emerged a skinless and abused Captain Elliot Spencer…oh the plot thickens!!!!

Gory, creepy and full of harrowing violence, the saga continues with more chaos at the hands of Barker and his anxious cohorts from Boom.