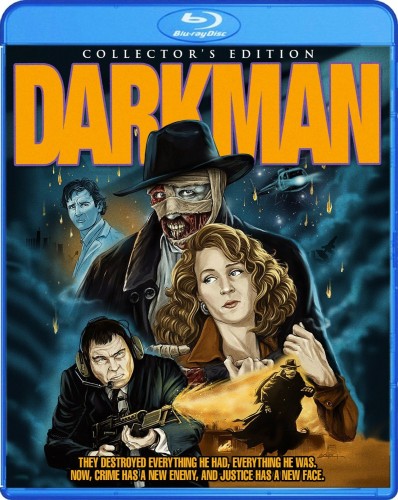 A hideously scarred and mentally unstable scientist seeks revenge against the crooks who made him like that.

You might remember this one from its tag line at the time “Who is Dark Man?”. If not, you surely know it from its ominous poster art that looks like a cross between the “The Shadow“, “Batman” and the “Invisible man“. This 1990 dark comedy action film was an earlier creation by none other than “Evil Dead” Sam Raimi himself. One viewing session with “Darkman” and you’ll instantly start to recognize some of Sam Raimi’s trademark stylings seeping over into an almost comic book fashion. Those extreme loony-rapid violence moments, those eccentric close ups, those “man on the brink” of insanity collages…all great stuff (and slightly mirroring his Evil Dead work)! 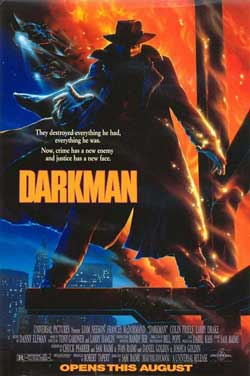 But who is “Darkman” and why should you care? “Darkman” takes the traditional aspects of a dark super hero and blends this mash up into a crime thriller that’s too cartoony to be a straight thriller (and too dark to be cartoony). The opener scene has always been among my favorites when actor Larry Drake playing the extremist thug Robert G. Durant walks into a garage with his small posse at the request of crime lord Eddie Black. A room full of gun-toking thugs all pointing their weapons at the Durant’s group are duped when Durant pulls a machine gun out of the leg of one of his lackeys and blows the entire gang into oblivion. What a great way to establish a bad ass character right within the first 5 minutes. The scene would pull you in for the ride your about to embark on and carry thru with the story at hand.

Attorney Julie Hastings (Frances McDormand)has got a lead on some crooked dealings going on involving the corrupt developer Louis Strack (Colin Friels). Strack has plans to build a new city and has been bribing the zoning commission in order to do so. Julie Hastings is a loose end that Strack doesn’t need of which he assigns Durant and his team to locate the incriminating document. As a result they pay a fatal visit to her boyfriend Peyton Westlake at his lab. 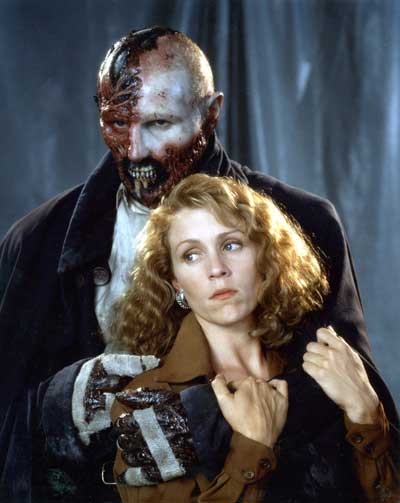 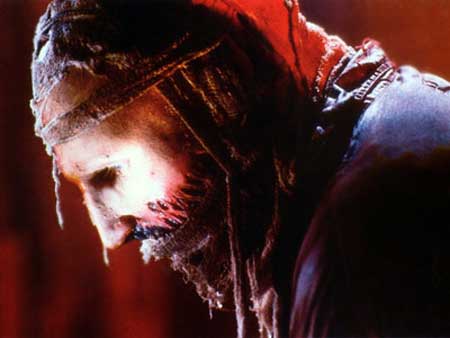 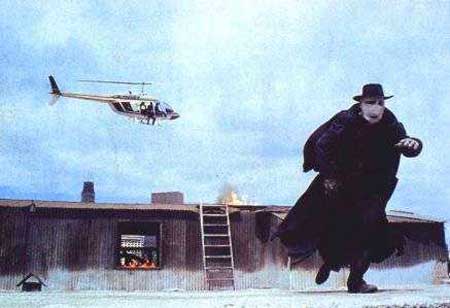 Liam Neeson stars as Peyton Westlake, a research scientist who is on the brink of discovering a sustaining form of skin replacement (synthetic skin). His efforts are close but limited due to the skin having a photosensitive reaction to light (starts to melt after 90 minutes). Liam Neeson is also the lead “Darkman” but how he gets there is where our story takes us.

Durant and team end up locating the document in Westlake’s lab and destroying the place along with murdering his assistant. Peyton is assumed to be dead after the lab is blown up but survives badly scarred in his new grotesque state. His nerves have been damaged, his hands almost complete destroyed, and his face is that of a half man, half monster. Peyton rebuilds himself and sets out to seek revenge.

It is from here that Peyton embraces the monster he has become intent on seeking vengeance. Taking his broken body and some leftover technology, he rebuilds his lab in and old industry warehouse. His research in skin regeneration provides to be successful enough to assume the identities of various members of Durant’s gang. Each is taken out per framing or other means to slowly bring the demise of the operation. 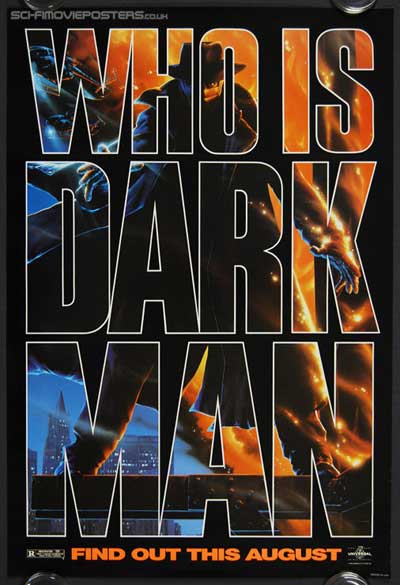 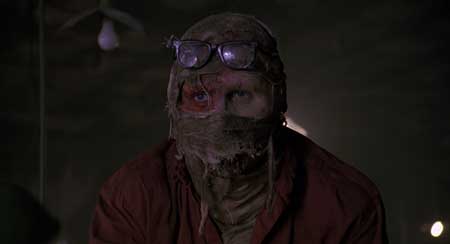 Peyton also manages to rebuild his former face from the skin materials enough to try and recoup his relationship with Julie. As he works in the background against the gang, the film takes on the occasional strange direction with emotional heightening and over exaggerated action sequences.

“Darkman” is a great film that suffers from a few slow downs within. It’s quirky enough to have a place among cult movie fans and somehow edges its way into the super hero abstraction genre.

Creator Sam Raimi was said to have originally had an interest in the “Shadow” and “Batman” franchises (but unable to gain the rights). “Darkman” arrived from this need and a deal with Universal Studios. “Darkman”received 2 sequels (despite them flying under the public radar),”The Return of Durant” and “Die, Darkman, Die“. They of course featured mostly new players (with the exception of returning Larry Drake ). The sequels were direct to video and lacked the success of the debut. 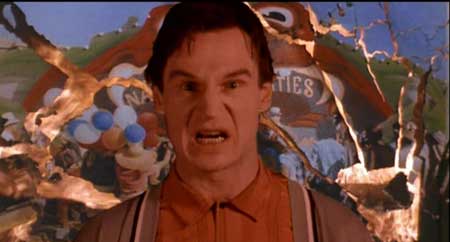 “Darkman” has alot of memorable moments that primarily aim at the core Batman audience franchise. If your like me, you might find yourself choosing the highlights over the slower portions. With Raimi behind this one, you can always count on those extreme sequences such as the helicopter segment. A fun film and the best of its franchise if you can’t check out all 3,then at least see the first.

Get Darkman, a bizarre classic superhero film now on blu-ray per Shout! Factory