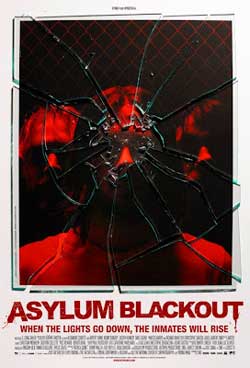 A group of cooks at an asylum for the criminally insane get locked in with the inmates during a massive thunderstorm.

George (Rupert Evans), Max (Kenny Doughty) and Ricky (Joseph Kennedy) together form a struggling rock band in Washington State during the late eighties. Blissfully we are never subjected to a random live performance of piss-poor music intended to convey their talent and, therefore, the tragic loss to the music industry their deaths would mean. To pay for studio time they all work at Sans Asylum, a large concrete block of a building located in a very remote area. Once a storm takes out the power, everyone finds themselves locked inside the asylum as the inmates start running loose.

“Asylum Blackout” is a French film, don’t worry, it’s in English, directed by Alexandre Cortes whose previous work has been in music videos for the likes of The White Stripes and U2 and transitions well into a full length feature. The first achievement from Cortes is actually making a movie rather than an extended music video, coupled with good performances from the entire ensemble speaks to a promising career for Cortes. More than one of the actors you might actually know from their other films but won’t likely notice until the credits begin to roll.

The use of setting and its impact on the story are stronger here than in most films. The remoteness of the asylum makes them isolated and plays throughout the story, the time period means a lack of cell phones and other technology that we take for granted today and affects how simply they become trapped with no way to communicate to the outside world. Once the power goes out the electronic doors simply won’t open and the staff is locked inside along with the inmates. This proves to be a great set up as the movie never succumbs to cheap clichés of crazy asylum inmates. They may be disturbed and unstable but are never shown to be overtly climbing the walls or banging their heads. Some of them are even capable of coherent conversation while others are confined to simple provoked outbursts that remain inside credulity.

Once the small and surprisingly inept staff is dispatched, the surviving member’s actions fit in right along with their situation. Any poor decision they may make stems from character flaws or emotional distress rather than a slimsy pretense to move the plot forward or place the characters into a contrived situation. Instead I fell right along with them in their plight; cheered their successes and lamented their losses, even some of the inmates themselves warranted some emotional attachment. It’s not Pete’s fault, he’s a nice guy, just don’t forget that they are still in an asylum and there’s danger around every corner.

The meat of “Asylum Blackout” is a well paced, engrossing gorefest that may prove too gruesome for some but it well worth the viewing if you have the stomach for it. There was only one point of detraction that interferes with this being a memorable experience; the ending lacked a certain strength that makes great movies stick with you long after they’re over. Not to say that the ending was bad, it actually has a nice twist; rather that many of the early moments of the film seemed to lead to red herrings. Certain situations didn’t pan out and particular character traits had no bearing on the outcome as they all served as little more than red shirted fodder. There would have been far more power at the climax if these elements affected the outcome but sadly, the ending chose to roll on its own. 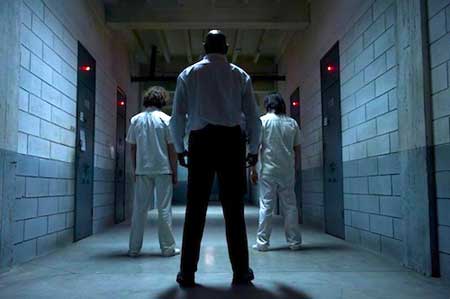 While the ending was good and makes “Asylum Blackout” a movie worth watching I will concede that it doesn’t make it a can’t miss film. The real payoff here is in the movie as a whole that’s well made, well acted, a fantastic entry in the horror family and you won’t leave wishing you had that hour and a half of your life back.