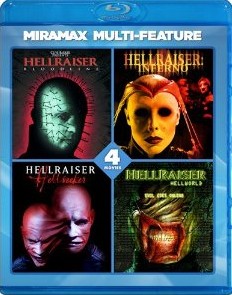 Hellraiser fans will want to snag up this great deal. Now, 4 sequels from the Hellraiser series – all on bluray. Echo Bridge Entertainment has been bringing us several of the Hellraiser titles in various forms. Though purists who’ve been holding out for the full resolution versions can get all 4 titles in one set. Featuring “Bloodline”, “Inferno”, “Hellseeker” and “Hellworld” Plenty of chaos, plenty of cenobium weirdness to fill your night.

HELLRAISER: BLOODLINE
The fourth chapter of the Hellraiser series chronicles the struggle of one family who unknowingly created the puzzle box that opened the doors of Hell—setting Pinhead free to spread evil here on Earth.

HELLRAISER: INFERNO
A shady L.A. detective finds himself lost in a nightmarish world of evil when he solves the mysterious puzzle box that releases the diabolical demon, Pinhead.

HELLRAISER: HELLSEEKER
Pinhead and his legion return to unleash Hell on Earth but standing in the way is Kirsty—the only person who has defeated Pinhead in the past.

HELLRAISER: HELLWORLD
When five hardcore Internet gamers are invited to a special party thrown by the website Hellworld, they are about to endure a night of unspeakable terror they believed only existed in cyber space.