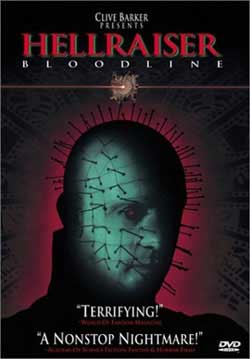 Spanning four centuries, this petrifying Gothic thriller recounts the anguished past of the L’Merchant clan, who unwittingly fashioned the puzzle box that unlocked Hades’ gates — and unleashed the monstrous Pinhead (Doug Bradley). As he and his band of diabolical demons propagate evil on Earth, three generations of L’Merchants (all portrayed by Bruce Ramsey) battle the legions of darkness to annihilate Pinhead … permanently.

First and foremost, I’m a fan of Clive Barker’s work, both in the literary world and in the realms of art and film. Well, allow me to correct myself, I’m a fan of films of his work that he’s directly involved with. And before you email me asking me does that mean I don’t like “Midnight Meat Train” I haven’t seen it, and I reserve my judgment until I can get my grubby little mitts on it, and don’t bother asking me if I enjoyed “Lord of Illusions” or “Nightbreed” because I can say without a shred of regret or shame that I love both of those movies. 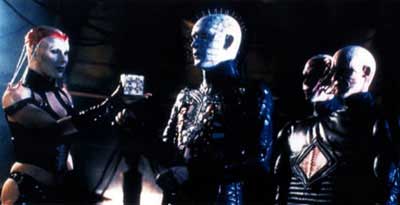 And no, that’s not a typo you saw, I did say “Hellraiser in Space”. Well before Jason made the trek to the final frontier, everyone’s favorite demon from hell went to space.

Funny bit of trivia, “Hellraiser Bloodline” came out the same year as “Leprechaun 4: In Space” which makes me wonder, were the people at Dimension films and Trimark smoking from the same bong or something at a party? Because I can imagine the two companies horror department heads sitting around in a dimly lit room with some Pink Floyd on the stereo passing a bong around and saying “Jeez, we want to make a fourth Hellraiser movie, but we can’t quite figure out where to take it.” 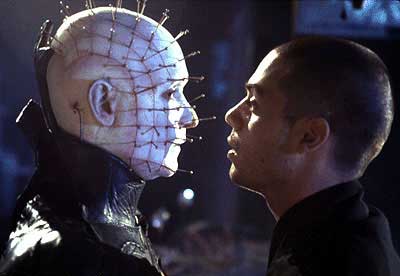 “No kidding, were gonna make another Leprechaun movie, but we don’t know where to go with it either”

At some point, someone makes a joke about setting the movies in space and the rest is history.

(Authors note: the last paragraph was meant to be satire, and the heads of Dimension Films and Trimark films would never smoke weed. Please don’t sue me.) 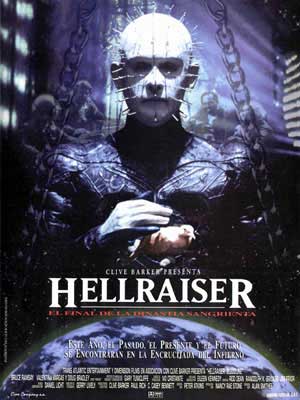 So we start the film on a space station in the future with a bald man using virtual reality gloves to control a robot in a locked room opening the lament configuration. The box opens, the droid goes boom and Pinhead makes his entrance. Then the space marines show up and interrogate the man, who as we learn is the descendant of Philip Lemerchand, and through his interrogation he explains the cursed history of the Lemerchand clan.

We are then introduced to Philip Lemerchand (played by Bruce Ramsay pulling triple duty as Philip, John Merchant and Dr. Paul Merchant) who has been commissioned to create the “Lament configuration” for a wealthy French noble/black magician. Of course Philip thinks this is going to be the big cash cow he’s been dreaming of, and instead the dastardly noble uses the box to summon a demon named Angelique into his command.

Further proof you shouldn’t trust the French. Of course, Lemerchand knows he must stop the dastardly noble, and attempts to steal the box. No great spoiler here, but he fails. 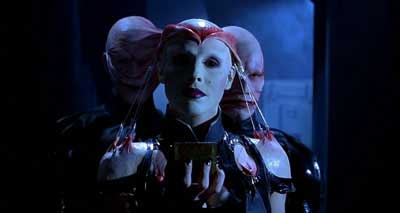 From here, we are subjected to the bulk of the film that takes place in 1996, with John Merchant, a successful architect who is being given an award for his design of a building that is hinted at in “Hellraiser 3: Hell on Earth” and is in actuality a nifty thing called the “Elysium Configuration”, a design that Philip came up with to close the gateway to hell that the “Lament Configuration” opened. It’s during this chunk of dull story that Pinhead makes his returns, makes snarky comments to Angelique (who he refers to as “Princess” throughout the film, which leads to the question: How the hell is she a princess of hell? Does that make her the daughter of The Leviathan from “Hellraiser 2: Hellbound” and if so, how in the f*ck did that giant spinning obelisk reproduce?),about her ineffective methods of seducing John Merchant instead of just torturing him. Gotta love old Pinhead, no need for all that fancy seduction and temptation, go right for the torture.

It’s during this time that we are introduced to two of the stupidest things about this movie (aside from the whole space story), the “Chatterer Beast” and a pair of twin security guards who’s total IQ might equal that of your average horror movie security guard.

Let me get it out now, I hate the Chatterer Beast. I do. Yes, it’s a cool idea, and sure it looks kinda bad ass, because lets be honest, a pit bull is scary enough on its own, but you turn the bastard into a Cenobite and it just got that much scarier. However, why would you turn a dog into a Cenobite in the first place? Does that make any sense within the established mythology of the films? My understanding of the Cenobites was that they were once human and that they were masters in the art of torture.

Maybe Pinhead has a fetish for torturing dogs? I don’t know, and the movie never explains the stupid beast so I’m going to try and forget the bastard exists and move onto my next target.

The Twins serve one purpose in the entire film, and that is to become one of the cooler Cenobites in the series, the “Siamese Twin Cenobite”. But until they get turned into said bad ass Cenobite, they are a pair of bumbling filler characters that make Deputy Doofy from “Scary Movie” look brilliant. They show up on screen for all of about ten minutes before they become Cenobites, and from there they actually are pretty cool, as they have not only one of the best death scenes in the movie (when they become Cenobites), but they also deal out the other best death scene when they separate and then squish a dude into goo between them.

Again, the second Lemerchand fails to destroy the gateway to hell, but he gets kinda close and were back to the future with Paul and the space marines who only have names so that the poor actors could feel more accomplished with their roles, although honestly they could have all been called “Generic dead guy 1, 2 and 3” and it wouldn’t really matter as we the audience know that they are all walking corpses from the moment they hit the screen.

Does Paul Merchant destroy the Cenobites? Does he escape with his soul? Does anyone care at this point?

Without spoiling the ending, I can say that despite the horrible story and ok CGI, the ending is at least a spectacle worth seeing, but it’s more one of those things that would make a good Youtube clip then something you would really want to sit through 80 minutes to get to.

Doug Bradley seems like he was phoning in his performance in this film, because Pinhead doesn’t come across as menacing or even vaguely scary. He just stands around and looks bored. Angelique (played by Valentina Vargas) is an ok character, but I found myself thinking that she was more attractive as a Cenobite than she was in her “Human” skin. And that’s with a nude scene!

Bruce Ramsay does an alright job with the material he’s given but there really isn’t much difference between his performance as Philip and John. The only thing that sets Paul apart from his ancestors is that he’s supposed to be looking intense in his quest to destroy the box. He also looks bored. Honestly, I’m not sure if everyone who was in this movie actually read the script or if maybe the original script they read was way better, and then half way through the movie they totally changed everything and by that point everyone was locked into doing the movie and just stopped caring.

Because I’m starting to think that could be the only explanation for the poor acting in this film. And for some reason, this film carries on the tradition started in “Hell on Earth” of not adding effects to Doug Bradley’s voice. Sure, his voice is still spooky on its own when he’s doing the “Pinhead Voice” but without the added effects that the first two films used to add that extra deepness, his lines just don’t inspire fear the way they should.

I wanted to like this movie. I really did, but don’t be deceived like I was by the synopsis that the box gives you (or the netflix sleeve as it were). Instead, I was left wondering why I had even bothered sitting through the entire movie, and wondering if Clive Barker (who’s name is listed in the credits as a producer) actually read the script or if he just said “Sure, here’s some money, put my name down as a producer. Now leave me alone I’ve got things to do.” This film proved to me that everyone I’d heard ranting about how bad the later “Hellraiser” films were, weren’t lying. Truth be told, I’m a little afraid to sit down and watch parts five through eight.

Though some how I doubt they could be as bad as “Pinhead in Space.”