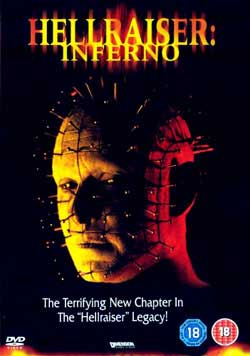 After solving a creepy puzzle, unscrupulous Det. Joseph Thorne (Craig Sheffer) finds himself trapped in hell with the hair-raising ghoul Pinhead (Doug Bradley) and a murderer at large. Thorne tries to outwit Pinhead and discover the killer’s identity in an effort to escape, but the trail keeps leading back to one man: Thorne. As his transgressions begin to torment him, Thorne learns the real meaning of the word

When you think of Hellraiser you think of blood, violence, monsters in bondage gear with all manner of metal devices embedded in their flesh, and the promise that anyone who dares open the Lament Configuration will surely be suffering a similar fate. You don’t however, usually think “psychological thriller”, but apparently someone at Dimension Studios thought that taking the Hellraiser franchise in such a direction would be a good idea. Of course, this is the same brain trust that thought setting a Hellraiser film in space was a good idea.

“Hellraiser V: Inferno” takes place in what can be considered the “modern day” and I guess within the insane timeline for the series, the events of this film actually take place sometime after the middle events of “Hellraiser IV” but obviously before the beginning/end of it. Are you confused yet? Good, because thanks to “Hellraiser IV”, all further series continuity is royally and truly f*cked. In fact, considering the ending of “Hellraiser IV”, why did they even bother writing any more sequels? We know what’s eventually going to happen, but when you’ve got a franchise that will make money, milk it until it’s dry I suppose. 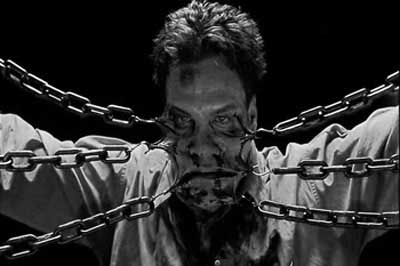 “Inferno” kicks off with the introduction of Detective Joseph Thorne (Craig Sheffer, who also appeared in Clive Barker’s “Nightbreed”) who, after a game of chess, explains in a voiceover that from an early age he’s been obsessed with puzzles and how things work. He makes a comment about how he never realized his life would be the biggest puzzle and we’re given the biggest piece of obvious foreshadowing ever uttered in this series.

Cue Detective Thorne finding the Lament Configuration as well as candle with a human finger embedded inside and we’re off toward what looks like another generic Hellraiser plot. 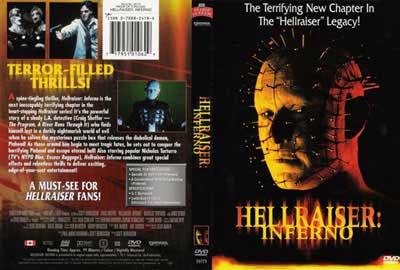 But what’s this? Our good friend Detective Thorne stops home to tell his wife he’s working on a case to only a few moments later pick up a prostitute. Well, this just got interesting.

And by “interesting” I mean we’re treated to an overly lit sex scene with plenty of fading in and out until the Detective wakes up, and goes into the bathroom and decides to play with the box. The box opens, there’s a little flash of light and……nothing.

No chains, no cenobites to rend his flesh apart, nothing. What the hell is going on here? Detective Thorne seems to be wondering the same thing as he leaves the bathroom and is now back in his house, or is he? I’m going to vote on “no” what with all the feathers floating about and creepy lighting and such. Here we are introduced to the “Wire Twin Cenobites” two eyeless female Cenobites that give Detective Thorne a chest rub he won’t soon forget! 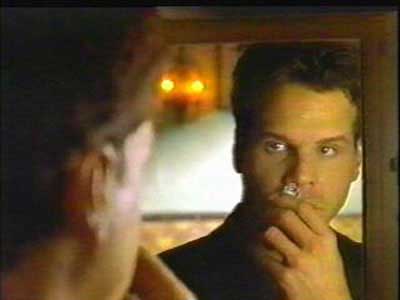 But the screams of a child are what rouse Detective Thorne from the twins, and as he makes his way down the stairs, we’re introduced to the third (Yes, Third!) chattering cenobite, the “Chatterer Torso”. Remember how big and bulky the original Chatterer was? Imagine him as only a torso, with less physical damage on his head, and pasty white, and you’ve got yourself a chattering torso. Doing what any sane person would do, Thorne jumps the railing and lands on a table to avoid the creepy torso guy. As he tries to make his escape, we see Pinhead for the first time in the film, and he rips Thorne’s face off.

But it was all just a dream. Thorne wakes up on the floor of the hotel bathroom, in one piece with his face intact, and makes his exit. Back at the station, we find out the finger in the candle belonged to a six year old child. Then Daphne, the prostitute, calls Thorne screaming bloody murder.

Daphne is dead and another child’s finger is found. Thorne confesses to his partner about the previous night’s activities, but begs him not to tell the Captain and to help him wipe down everything he touched the night before. While this is going on, Thorne plants a couple of pieces of evidence against his partner for a later blackmail plot.

From here on out things start to get truly bizarre, as Thorne tries to figure out who the murderer is in time to save the child. He learns of a man only known as The Engineer, seemingly a ghost that no one can track down but who always manages to find those pursuing him. The deeper the Detective starts to dig, the more he starts to see the Twins and another eyeless Cenobite (who appears randomly) only to be someone else entirely when Thorne corners him.

Then Thorne receives a video tape showing the eyeless man murdering the informant who told him about The “Engineer”. When he tries to show the tape to his partner and Captain, it’s blank. But shortly after, we find out that the informant has been killed, in just the way Thorne described and another finger is found.

Can Detective Thorne hang onto his sanity and save the child? Who is The Engineer? And why do all the victims seem to be somehow connected to Joseph Thorne?

I really enjoyed this movie. It felt closer to the original Hellraiser in that the main focus wasn’t on Pinhead or the other Cenobites. Rather it was on the people and the search to figure out who the killer is and how The Engineer is involved. The other surprising thing about this movie (besides my enjoyment of it) is the relative lack of gore. Almost all of the death’s that take place are either shown for only a moment or just before any major violence is committed, the camera pans away. I will say that even with all the strange twists and turns in the plot, the story is easy to follow. Despite the somewhat overused “Everything’s normal, Crazy sh*t happens, Just kidding it’s a dream” device that pops up here and there throughout the movie, it felt more natural within this story, where as in other films that try to throw in a completely random “What the Fuck?” moment only to reveal later that it’s just a dream, it doesn’t feel gimmicky.

The story is solid, and doesn’t feel like it was just some unfinished script that had Pinhead and the Hellraiser mythos shoehorned into it to try and cash in on the franchise’s appeal; it actually feels like a Hellraiser movie, which is more than can be said of “Bloodline” or even to a degree “Hell on Earth”.

The ending may piss off some viewers, as The Engineer is revealed, and the final confrontation with the killer could seem absurd to some, I thought it actually worked really well, and when the film is over, it gives a whole new perspective on what the Cenobites can do.