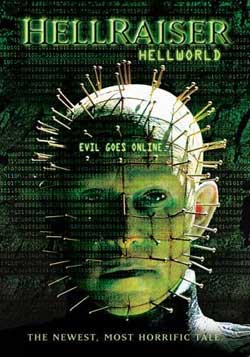 In this eighth installment of Clive Barker’s Hellraiser franchise, a group of young Internet enthusiasts get sucked into a video game and soon score an invite to an exclusive and mysterious gathering, where the lines between cyberlife and reality are blurred. But when the soiree starts, the computer whizzes realize their host is none other than the maniacal Pinhead (Doug Bradley). And unfortunately for them, he knows how to throw a killer party.

Welcome to Hellraiser HellWorld, a premise that is based around the love of an online video game played by young gamers. The franchise has evolved into a popular version of the movies. The players engage in online puzzle boxes and tests to pit their skills against Pinhead and his minions. 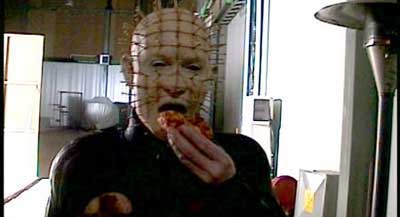 Though within a local group of friends, one of them decides to take the game too far and sets himself on fire. The traumatic event affects his friends who also have a hard time keeping offline enough to morn his death. Though it’s a online challenge that leads to a local Hellworld invite that perks all their interests into attending the party. This party happens to exist within a architectural structure designed by the famed Philip Lemarchand himself.The host of the event is an older man played by Lance Henriksen who is quite the collector. He invites the group in and indulges their curiosities. This group mainly consists of Chelsea, Jake, Derrick, Allison and Mike…all passionate Hellworld gamers. 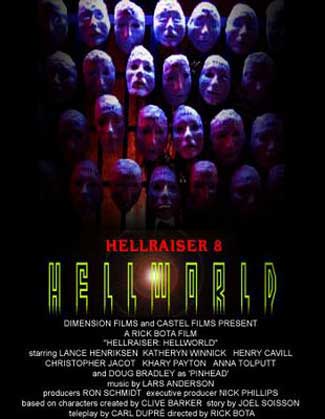 The party is a celebration consisting of drinking, debauchery, and dancing with the additional perk of cell phones and white painted masks sporting 4 digit numbers.

Their group begins to enter into a dream state of death, cenobites, torture and pain. Though as a plot line, alot of the details don’t really add up in the scheme of the Hellraiser mythology. We of course get all the details laid out for us later which without would just be damn confusing. During this time, the friends are hunted by demons, executed and taunted by the host himself.

The film does present a few cenobite appearances, though limited to Pinhead and 2 others. Doug Bradley, of course reprises his iconic role with the usual impact he brings to the screen. For those taking note Gary J. Tunnicliffe is back providing his expertise on Cenobite practical effects. Rick Bota is also back at the directing helm with 2 additional HR films to his credit. 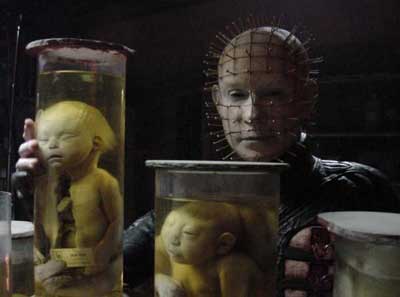 The movie was poorly received by HR fans who felt the direction was out of the scope of what they envisioned HR to be. This round tends to almost fall more into a murder mystery plot line than the usual “hell has awakened” stories. You do have to feel for the writers who are always searching for new ways to keep this franchise alive. Many would argue that Barkers vision was abandoned long ago in which I firmly agree. HR has become a franchise that is sold on name alone with the inclusion of a Pinhead somewhere in the mix. This particular sequel is driven towards a younger hip market who can relate to the metrics and status quo they have come to know thru other films. 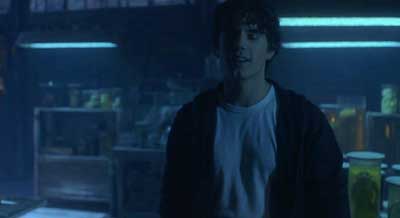 Though as a standalone the film might do ok with audiences. Where it crosses the line is in trying to marry this franchise with a target audience formula, namely “slasher teen”. You get the consummate Hellraiser fans who really want a return to the lineage. A return meaning, more back story, more disclosure of the cenobites and more interaction with a visual Hell. HellWorld pokes fun at that idea with its modern interpretation that stems away from what the fans seek. It changes the rules around, ignores its heritage and insults the central idea of Pinhead and his world of suffering.

In summary, Hellworld is at times not bad, and makes use of approaching Hellraiser in an innovative way. Though when it comes down to it, HR fans know what they want and its simply not this.

Hellraiser Hellworld is now available as a Bluray from Echo Bridge