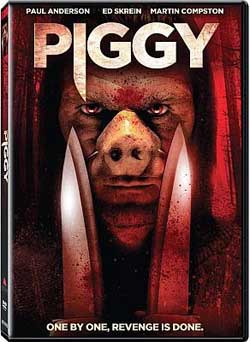 London, modern day: Joe, a mild mannered young man is bored by his life. When his beloved brother is murdered Joe finds solace in Piggy, one of his brother’s old friends. Piggy helps Joe to cope with grief, intent on saving him and helping him get justice for his brother’s killing. As their friendship grows Joe finds himself in an increasing dangerous and murky world of violence and revenge. As Joe life collapses around him he starts to question who Piggy really is, and how honest he’s really been with him. When Joe confronts Piggy a series of events are put in place that lead to a disastrous climax

At the expense of sounding jingoistic, there are three things that Americans can’t deny with regards to the British: firstly, we love our afternoon tea. Secondly, there’s something inherently fascinating about the monarchy. Lastly, we know how to produce damn good movies. From Michael Powell to Joe Cornish, instant classics have been released from the isles throughout the decades. Like World War Spitfires with lethal accuracy, there has been a barrage of hits with only the occasional dud – even down to the grassroots of the straight-to-video category. Piggy is a British film with a British feel by directorial debutant, Kieron Hawkes…so, no pressure to deliver. Mahatma Gandhi once said “it is better to be violent, if there is violence in our hearts, than to put on a cloak of nonviolence to cover impotence”. I can only presume he did so after experiencing visions and trials akin to that protagonist, Joe, experiences.

Joe (Martin Compston) – a mild-mannered young man living amongst the rigours of urban London – attempts to come to terms with the murder of his brother, John (Neil Maskell – Kill List, The Football Factory). He does so in the most unscrupulous fashion when an old friend of his brother named Piggy (Paul Anderson – Sherlock Holmes: A Game of Shadows, The Firm) arrives to help Joe get revenge against the people responsible for the killing. Soon, Joe finds himself involved in the most depraved sense of violent vigilantism – a stand that will inevitably lead to disastrous consequences.

If you live in the city – any city – life is undeniably more uncompromising and fast paced than rural locations. It’s a given. The sight of urban decay is prominent all around you as you speed by but, for many who have been acclimatised to this locale for so long, it remains largely unnoticed. However, director Hawkes proves that this imagery; this depressive way of life can be portrayed in a distinct fashion. Clearly influenced by the likes of Trainspotting and Lock Stock, Piggy revels in the vision of ‘Brit Grit’ that takes us into the underground, backstreets and alleys of the more hazardous facets of London where walls are canvases for graffiti artists and no completely sane person dare go. Everything is tinted, tilting perilously between stark reality or dark, dank, revengeful nightmare. It’s all a method to enable the audience to empathise with and, undeniably, to embody the character of Joe – his thoughts, his emotions and the deterioration of his life. Dusted with ethereal orchestral scores and pig noses that accompany this sense of surrealism, Piggy moulds reality with dreamscape.
Is this all just one big spiteful reverie? Joe continually deludes himself with this speculation. Besides the basic structure of the story (which no doubt takes second fiddle to the aesthetics of its actual production), Piggy offers insight into the psyche of a wounded soul. Joe is a man stuck in an environment he struggles to associate with, both mentally and physically. 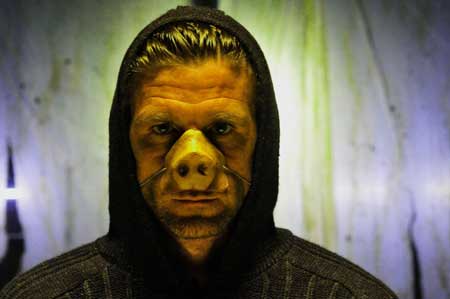 He likes to keep himself to himself, stays indoors predominantly and keeps out of any trouble. He’s spent a long time suppressing emotions until the death of his brother triggers within him notions he’d avoided. We hear this; his psyche poetically unveiled via voiceovers throughout. That’s where Piggy comes in and becomes a larger than life character within the narrative. It’s perceptible that he serves as a metaphor for Joe’s explosive release of expression. All the anger that Joe had pent up, everything he’d wanted to do – fight back against his oppressors – happens through Piggy as a personification of that will. So much so that, for long periods, the film had me thinking whether I was watching some kind of knockoff Fight Club/Brad Pitt/Ed Norton situation but Piggy allays this notion by its conclusion.

Then, the narrative has justifiable cause to become exploitative: now that you’ve understood the mind f*ck, it’s time to see the damage it can cause. Like a malfunctioning Terminator, Piggy chases down all those responsible for the murder and sadistically subjects them to a volley of sustained physical torment that will only ever end in their brutal deaths. Occasionally the scenes of violence were difficult to bear although, in the main, there were Tarantino-esque cutaways that denoted violence through sound and the repulsed reactions of Joe. The physical was as artistically performed as the mentality of the characters in this situation. Afterall, this is thriller not splatter.

Paul Anderson as Piggy was a revelation. It seems an easy decision to cast him as such as he once again depicts the kind of uncouth socially impeded characterisation he perfected in Nick Love’s drama, The Firm. His look and charisma may possibly have made this film. Without a cast of somewhat recognisable and talented actors, there was every possibility that Piggy may have remained under the radar. Maskell, who has a longstanding working relationship with Hawkes, is a rising star of British film.

As the likable tough guy, there’s nobody who fits the bill more aptly. Typically the front man, he was still able to work well as a supporting cast member whilst Martin Compston is reminiscent of a young Nick Moran. In all honesty, this was all an instance of necessary typecasting throughout because if you possess these actors, you may as well utilise them for what they are good at. They did what they do well. 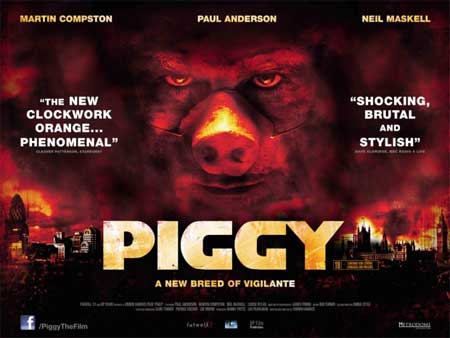 Forget happiness and embrace the melancholy of an enjoyable thriller. From start to finish the audience is unsettled; a mood that never lets up. Beneath my dissection of the narrative intentions is, ironically, a conclusion that is without rhyme or reason – again, like a dream – that deconstructs the conventionality of film: who is Piggy really and what does he want? You rarely know with all certainty what is going to happen and when with Piggy but when it does, it will have you yearning for the next eye-opener.

Piggy is now available on DVD per Inception Media