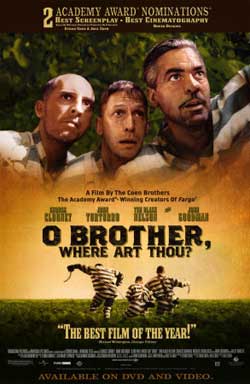 Homer’s epic poem “The Odyssey”, set in the deep south during the 1930’s. In it, three escaped convicts search for hidden treasure while a relentless lawman pursues them.

Joel Coen and Ethan Coen hit it out of the park with one of the most stylized strange concoctions of a film titled, “O Brother, Where Art Thou?”. This instant cult classic sets itself in the South with a heavy layer of bluegrass and country folk songs providing the mood from front to back. The film begins stating its basis on the foundation of the famous poem, “The Odyssey”. Though the relationship is loosely based. Those who are familiar with the poem, will note the usage of names and settings that take on familiar associations.

3 convicts Everett McGill (George Clooney), Pete Hogwallop (John Turturro), and Delmar O’Donnell (Tim Blake Nelson) escape from the chain gang with the promise of a buried treasure. Shackled at the ankles, they high tail it until being able to free themselves from their constraints. On their scent is a lawman by the name of Sheriff Cooley (Daniel von Bargen) who wants them back at any cost. It is later discovered first by hint and then literally that Cooley is actually Satan in disguise coming to claim their souls. The first clue comes when the boys pick up one, Tom Johnson who has just struck a deal with the Devil by same description (at a cross roads no less). Black eyes, hell hound at side, reflections of fire, Cooley is our primary antagonist in the film. 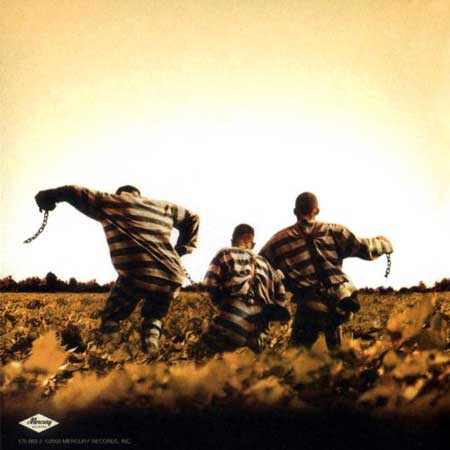 The 3 boys make way in this unique adventure period piece spawning from the creative minds of the Coen director/writer team. This comedy adventure (while basing itself in the throes of Southern times right in the great depression of 1937) offers a variety of encounters along the way. Each while not a “direct” match to the Homer poem is meant as a form of similarity for those who are astute. 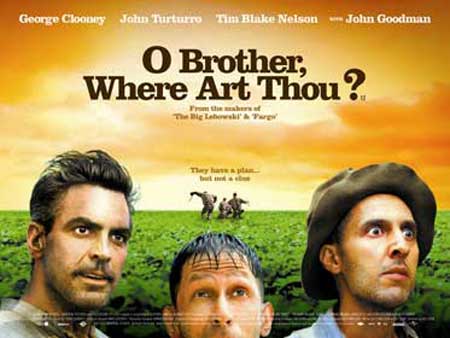 The 3 of them have 4 days to retrieve the treasure which is stated to be buried but at the threat of being flooded per a new hydroelectric project going in. First encounter is a blind man who gives them advice on their future while traveling on a hand pumped rail car. The man states to look for the “”cow on the roof of a cotton house”. Shortly after, they encounter Tommy Johnson, a black guitar player (who matches the profile of famed “Robert Johnson) of whom tells them they can make some quick money at a local radio station by performing for the owner. 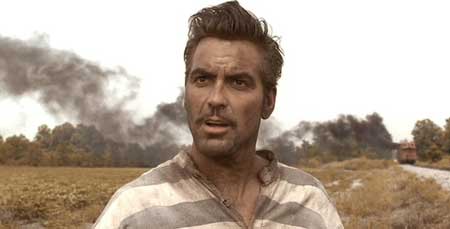 The 4 of them perform and record the song “Man of Constant Sorrow”, under the guise of their group’s title, The Soggy Bottom Boys. Only interested in the money, they don’t realize later that their song is becoming famous in the meantime on radio stations across the land. Further encounters include Baby-Face Nelson and a one-eyed Bible salesman named Big Dan Teague. Dan lures them out to a field only to assault them while robbing their money. They also comes across a few other circumstances which include a group of people in mid-baptism and a trio of sirens who sing them to sleep. It’s all very appropriate but yet still a bit abstract giving the film its special qualities. 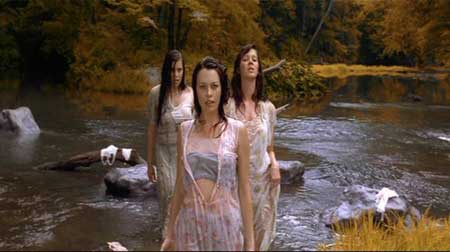 Pete gets lured away when the sirens turn him in for the bounty, leaving the 2 of them to travel forward. Though later he is rejoined with the group as they complete their mission. Ulysses eventually reveals his true intention which is to regain his wife and his 6 (or 7) kids before she remarries. His wife is played by actress Holly Hunter in the role of Penny McGill (Wharvey). 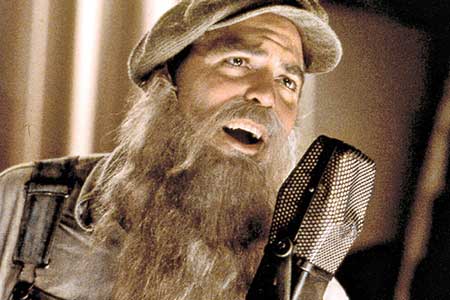 The movie while heavy in its Southern style is one of the more unique products to come from the Coen Brothers collective. It keeps pretty light which is a different approach than some of their more darker releases. The film was a commercial success and of course features the acting talents of one of the Coen’s repeat performance actors, John Turturro. 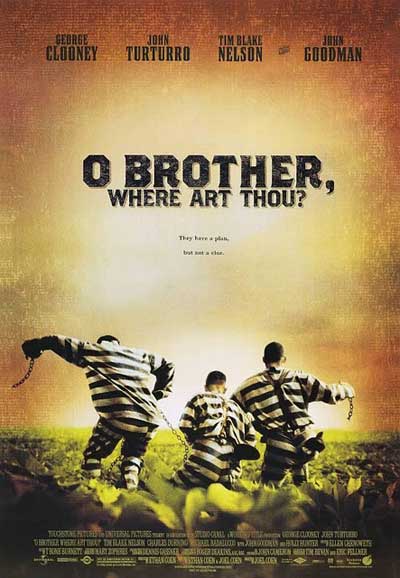 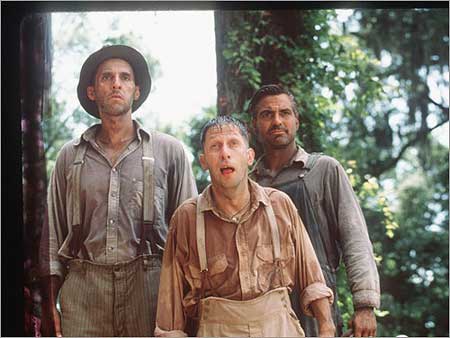 The film was entered for 2 Academy Awards, with a soundtrack that was highly regarded. It appears even in its odd variation of theme, structure and cultural associations, that “O Brother, Where Art Thou?” was an all around win. The movie was noted as using a unique color correction approach giving it its sepia-like qualitiy. In short, this offbeat creation might be a bit too blue-grassy for some fans, but if your a fan of the Coen’s work then you’ll feel right at home in the intelligently scrutinized Odyssey-variation script.