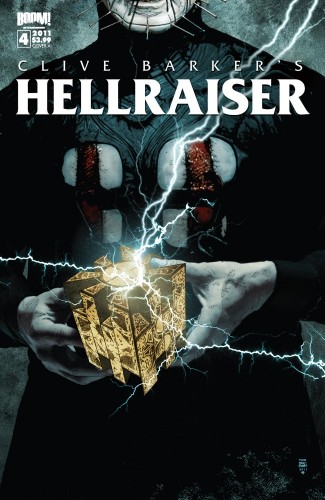 As the Hellraiser world turns, plots and manipulates, we find that Kirsty is yet visiting another deceased acquaintance close to her. Her boyfriend, soon to be fiance Edgar Boyle is revealed dead while Kirsty is called in to identify him. The box which fell out of his clutches is taken underground to a subterranean group who recognizes its power and destruction.

The leader tells his boy to discard of it immediately but evidently too late as the box release hells fury on them. In this issue we get to see an even greater display of chains flying, killing, and destroying everything in their path. The Cenobites delight in the chaos, while Kirsty has to face them once again looking for the unreturned puzzle box.

Pinhead explains that he has plans for her and that perhaps she is more bound to the box than she cares to admit. In short, many die, a train gets demolished and Pinhead grants Kirsty once again the pleasure of the box. 25 years of suffering makes Kirsty start to wonder if she is already living within her own hell.

This issue has some great wrathful pages keeping strong tot he visceral nature of the Cenobite universe. You won’t want to miss this ongoing sage of blood, desire and chaos.