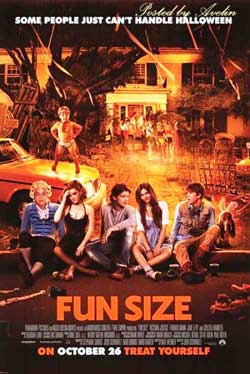 When a troubled but whip-smart teen girl loses her oddball little brother on Halloween, she has one desperate night to track him down

There could be no deeper horror to a parent or loved one than a child gone missing. Those who have braved the misfortune of such a calamity would rather engage in a bloody battle to the death with Jason, Freddy and that crazed beast from “Cloverfield” all rolled into one hellish creation than to go through such a helpless, desperate ordeal. Being childless myself, I can only imagine the turmoil, though never truly feel the hot coals of anguish it must inflict. To lose one’s bloodline in a blink must be a veritable living nightmare. 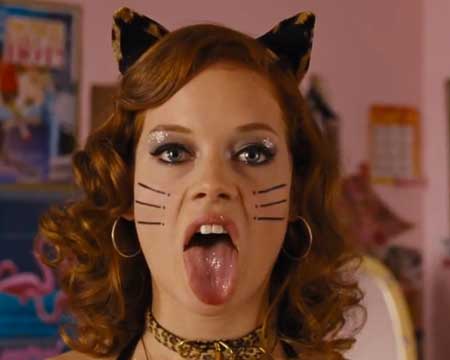 Unless it’s the driving plot of a new comedy from Nickelodeon Productions! In that case, the frantic search for a vanished innocent would indubitably become the greatest madcap evening of one’s life, culminating in moments of both audacious joy and intimate reflection. The conceit that a teen’s hunt for her younger brother throughout a Cleveland suburb on Halloween could lead to “Adventures in Babysitting” shenanigans is milked until begging for sweet mercy in “Fun Size.” This is the latest live action offering from the same studio behind the equally terrifying and disturbing fright fest “Hotel For Dogs,” and only the second for Nickelodeon to receive a PG-13 rating from the MPAA. Why in the name of all that’s unholy would HorrorNews be giving this drivel the time of day, you may ask? My sources have informed me it’s the film’s connection to our site’s favorite holiday, though I don’t recall ever coming across a review for “Ernest Scared Stupid” here . . . (Note to the boss: Please don’t make me review “Ernest Scared Stupid.”)

It all begins pleasantly enough, with our feisty high school heroine Wren (Victoria Justice) chagrined about taking her mute younger brother Albert (Jackson Nicoll) trick-or-treating instead of attending a Halloween party thrown by her handsome crush Aaron Riley (Thomas McDonnell, looking old enough to have fathered half of his “peers” in this movie). Albert hasn’t spoken a word since the recent death of their father, an affliction that most would find distressing, but is barely addressed by either Wren or their preoccupied mother. As portrayed by my own personal crush Chelsea Handler, matriarch Joy would rather spend the evening at a kegger with her twenty-something boyfriend Keevin (Josh Pence) than help her emotionally disturbed child through the hardship of his first Halloween without Dad. Perhaps I’m being a bit tough on “Fun Size” out of the gate here, given it’s just a comedy and not social commentary. Coincidentally, I had to chant the words “It’s just a comedy” in my head throughout the 86 minute run time that often felt like six hours. It didn’t help.

Joined by deplorably selfish friend April (Jane Levy), Wren promptly loses her little brother within the most unrealistically elaborate neighborhood spook house I have ever seen. I remember as a youth attending a haunted house put on by the Junior High student council, which consisted primarily of pre-teens in Megadeth tees jumping out of the shadows and beating the crap out of us with what I can only assume were their own belts. It was horrifying. Aesthetically, however, it had nothing on this place, and our leads must join forces with local nerds Roosevelt and Peng (Thomas Mann and Osric Chau, both engaging) in the hunt for Albert. Wacky fun (in theory) ensues.

Let us assume that by this point I’ve forgiven “Fun Size” for the encompassing lack of concern involving Albert’s welfare displayed by every other character in the film (I had not, by the way), and strapped in for an empty-headed and freewheeling comedic coaster ride. That in mind, the tawdry enterprise does deliver a few brief chuckles, most of which come courtesy of Thomas Middleditch’s lovelorn gas station clerk Fuzzy, and an amorous giant mechanical chicken logo which deflowers Roosevelt’s car in a hilarious sight gag that is dragged out for approximately thirty seconds longer than need be. This sequence and the unnecessary dropping of a singular f-bomb, I suspect, are what garnered “Fun Size” a rating above the PG that Nickelodeon Films usually bear. 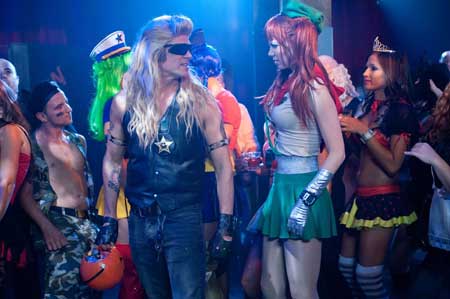 Johnny Knoxville enters the picture long after we’ve all forgotten seeing his name in the promotional literature, to bring the entire affair back down into morally offensive terrain. He plays Jorgen, a leather-clad dolt who kidnaps Albert in hopes of collecting the money needed to pay for his destroyed screen door as a ransom. I am not making this up. This final, depressing attempt at broad situational comedy once again puts our pivotal youth in harm’s way, and was the last straw for yours truly. With the exception of Fuzzy in a funny aside to a couple of bystanders when offering Albert a ride (“I am not luring a child.”), not one adult shows the slightest regard for this poor kid, nor even seems to question why a young boy is wandering disconsolately at night without supervision. I really loathed these people. 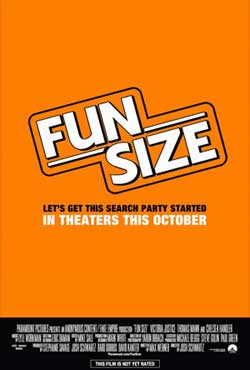 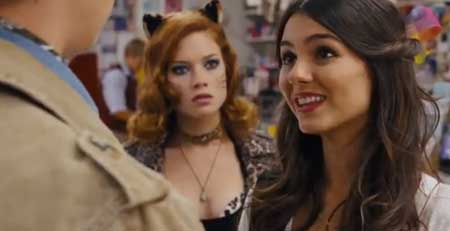 I would like to make a point perfectly clear. I am an adoring fan of black comedy, so much so that I remain one of the few folks who can see past its subject matter and appreciate “The Human Centipede” for the irreverent comic masterpiece it is. “Fun Size” isn’t attempting dark humor, however. It’s aim is that of light-hearted farce, and I can’t remember the last time I witnessed a major motion picture fail so miserably in the execution of a seemingly simple goal. Max Werner, a writer for one of the sharpest shows in television history, “The Colbert Report,” has clearly missed the boat in his first and hopefully last full-length screenplay attempt. Director Josh Schwartz, also making his debut transition from the small screen (“Chuck” and “The O.C.”), keeps everything bouncing along to the best of his abilities, given the awful material he’s stuck with.

In the end, everyone learns their lessons about what’s truly important (family, friends, yada yada), and of course Albert is finally discovered by Wren at their father’s grave in one last plug on Werner’s part to remind us that we’re supposed to give a rat’s ass about any of this. These scenes are empty gestures on the parts of all involved, given the dreck that proceeded them. What a complete waste of time. Join me again, beloved readers, for my musings on “It’s the Great Pumpkin, Charlie Brown.” Just kidding. After “Fun Size,” one can only hope.