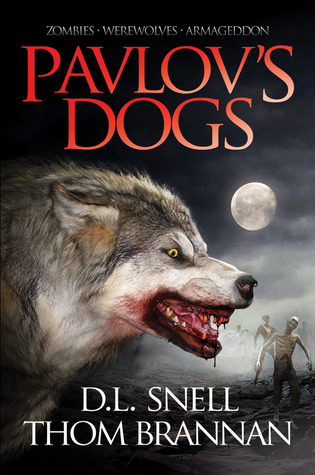 Werewolves! Zombies! Armageddon! Now there’s a good tagline. This is a wonderfully engrossing and satisfying book which has all the hallmarks of a classic horror novel, whilst mixing two beloved beasts in one tale. Despite its title, it’s not about physiologist Ivan Pavlov and his investigations into the gastric workings of dogs, which is probably a good thing.

This is a dark and action-packed story which pits zombies against engineered werewolves – the titular Pavlov’s Dogs – (who are a crack team of soldiers sent into a zombie outbreak to rescue survivors), and it’s a far better book than that summary suggests. Far from being a kitsch cash-in on the popularity of these creatures right now, it’s a valid and exciting genre-clash with a strong prose style and a tense atmosphere which rarely lets up.

It’s not just a rip-off of Dog Soldiers, fear not. Snell and Brannan have presented a real novelty in the genre, offering a cast of badass characters which are a million miles away from the usual disparate band of survivors and misfits. They do have their issues and flaws as people, but they are trained killing machines with supernatural powers, making them a very fine match for the legions of the undead which wait at every turn on their mission.

It really is a case of a book which feels very much like it needs to be adapted into a movie, as it offers action, drama, scares, gore and a well-paced story which readers are going to love.

Behind that unassuming title and the slightly misleading cover (is it just me or does it look like the cover to an R.L. Salvatore fantasy novel?) lies a hard-hitting piece of horror entertainment that takes well-worn stereotypes and creatures, flings them together and comes up with something that isn’t very new, but is a damned fun story.