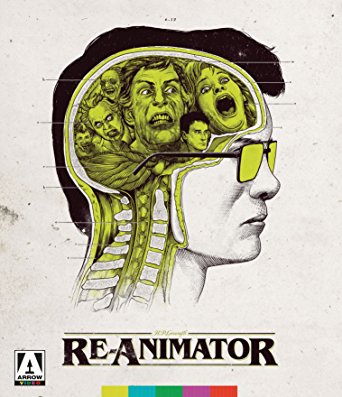 A dedicated student at a medical college and his girlfriend become involved in bizarre experiments centering around the re-animation of dead tissue when an odd new student arrives on campus.

It’s pretty safe to say that any real horror fan from the 80’s remembers the release of the “Re-Animator“. A film that also bases itself on the horrific novels of H. P. Lovecraft (Herbert West: Reanimator), is a horror-meets-science fiction gore-fest full of plenty “over the top” moments and circumstances. It takes on a rather comedic approach to its gore factor with the use of the body props and excessive blood shedding. You might even say it provides a inspiration for later films such as New Zealand’s 1992 “BrainDead”. Though most will point to the visionary minds of Director Stuart Gordon and Producer Brian Yuzna who has made a name for themselves with similar weird products over the years. Re-Animator was an instant cult film that moved into a franchise of sequels many years after. 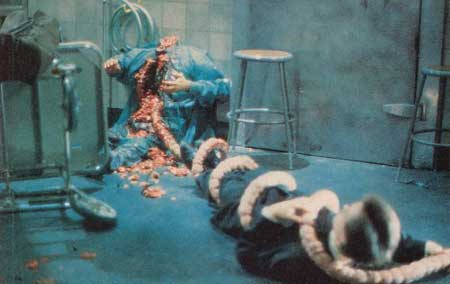 Actor Jeffrey Combs starred in his most-noted role as the mad scientist Herbert West. It also features the bizarre performance of actor David Gale as Dr. Carl Hill who also starred in the 1990 sequel “Bride of Re-Animator” 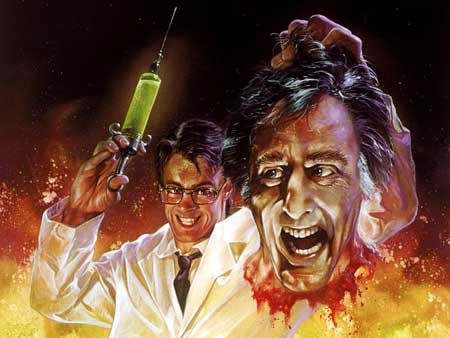 The setting begins at the Zurich University Institute of Medicine in Switzerland, where West manages to bring back his deceased professor with the injection of his reanimation serum. Though the side effects are drastic turning the living corpse into a savage of gruesome proportions. 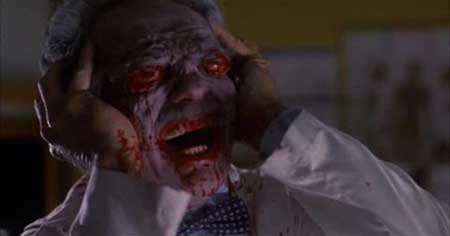 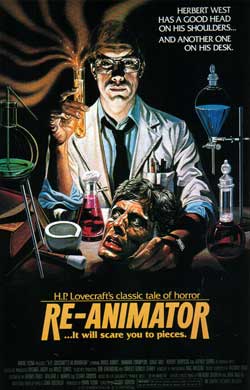 West takes residence with a roommate by the name of Dan Cain (Bruce Abbott) who is also a medical students at the university. When Dan discovers the West has reanimated a cat with his “reagent” he decides to joining him in his experimentation, thus taking the reagent into new areas and delving with the dead. 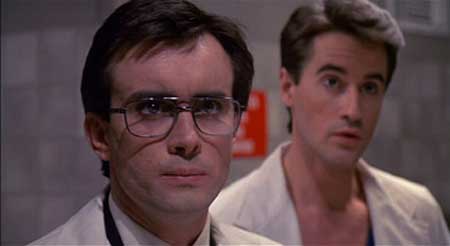 They become barred from school when their activities are discovered though this doesn’t stop them from more extermination. What entails is alot of dead corpses reanimated opening up a mass amount of chaos and walking dead savagery. Hill soon discovers what is going on and proclaims to black mail West in an effort to take credit for his discovery. 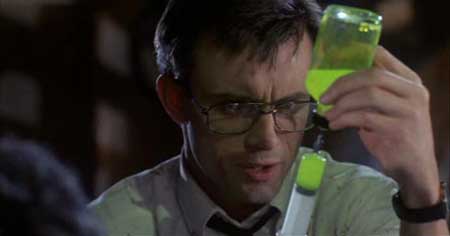 Barbara Crampton stars as Dan’s fiancee Megan who gets the best scene of the film. When Hill is decapitated by a nervous West with a shovel, West decides to reanimate Hills’s head to ask him additional questions. Hill directs his severed body while it carries his head and proceeds to take control over the other corpses, making for a gory encounter In the films most famous gross out scene, Hill restrains Meghan to a table while his body proceeds to lower his head over her seductively. The combination of ludicrous over the top gore in “Re-Animator“, soon had folks talking about it making it a top rental to see. It also faired well in the box office. 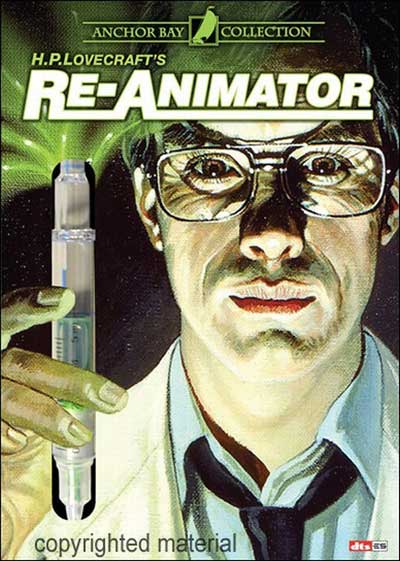 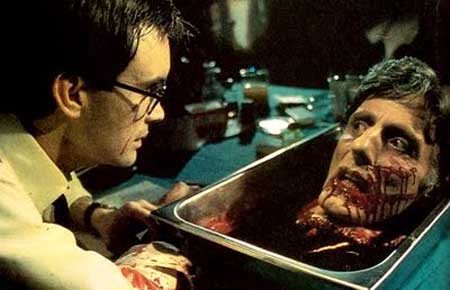 The 3rd act is filled with all sorts of headless bodies reanimated for a finale of death, dismemberment, and chaos. The film has garnered a cult following of the years while keeping it in the category of dark horror comedy. It was reported to have used over 24 gallons of blood while borrowing the same sensibility found in such classic as “The Evil Dead” movie. Actor Combs became well known in the horror circles soon after going on to a smattering of other roles. His tension and intensity made him a prime actor in the genre. The film drew success estimating a 2 million in profit over its $900,000 budget. It has since gone on to be a standard inclusion in cult movie books. Roger Ebert described it as c**keyed and offbeat but pleasant in a warped way. It’s hard to tell if it would had been received in the same way today, but at the time it was just the kind of weird horror that the genre craved. While the other releases were interesting, none matched its original appeal.