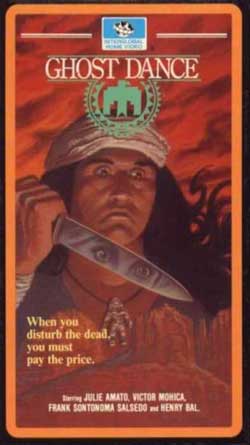 The spirit of a long-dead warrior possesses the body of an Indian medicine man and turns him into a homicidal maniac.

Day 3 of the the 80’s experiment. I am bloodied but still I rise to insert the next movie into my DVD player and see what my nefarious editor has demanded I review. Today the movie is something called “The Ghost Dance” and as it begins I’m presented with an interesting dilemma. It’s hard to review a film that’s so dark I can’t really see what’s happening onscreen. 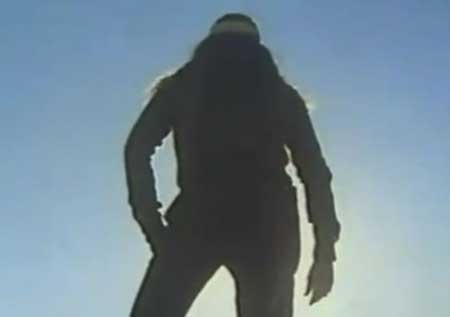 And that’s a shame because as written & directed by Peter F. Buffa “The Ghost Dance” had some potential. In the Arizona desert during a search for Indian artifacts, the remains of an Indian shaman named Nahalla are discovered. His mummified remains are removed and brought back to the museum where Dr. Kay Foster (Who headed the excavation) is a professor of anthropology. Unbeknownst to anyone, a small pouch that belonged to Nahalla was left at the site of the dig and a drunk Indian man happens upon it. Somehow he figures out that it belonged to the shaman & believes that it will bring him great power. 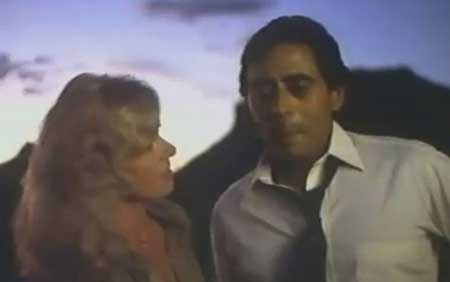 Later he performs a ritual to bring Nahalla back to life but instead of being resurrected, Nahalla possesses the man and uses him to do his bidding. Since Nahalla believed that the white man had forcibly taken over the land his people had lived on for ages and he created a cult he called “Ghost Dance” that he believed would put the Indian back on top and eliminate the white man once and for all. To accomplish this he routinely tortured & killed many before he was stopped. Now he’s back and he’s cutting up the staff of the museum. 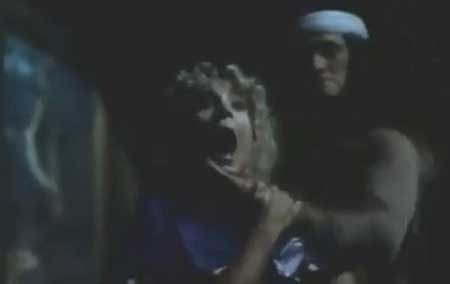 Now I know that there wasn’t much of a budget here to start with and maybe it’s just the poor quality of the VHS transfer but most of “The Ghost Dance” is really unwatchable as in I could not see most of what was going on most of the time. As a matter of fact I could only barely make out 15 of the first 40 minutes of the movie. A lot of the film is shot at night or in darkened rooms and maybe Buffa thought himself Kubrick-ian in his ability to film in little to no light but he was wrong…really, really wrong. I’m figuring about 65% of this movie was filmed at either night or in dark rooms so it was a true chore to have to sit and watch it. Some scenes were completely dark and I could barely make out anyone on the screen but I heard them so I knew they were standing in front of the camera doing their thing. 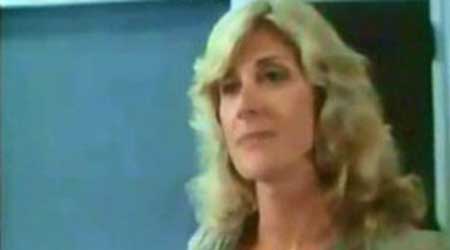 As the movie continues, Foster & her co worker Paul (James Andronicus) begin to figure out that although they have Nahalla’s corpse locked away, His spirit is raging and murdering all who cross his path. Her live in boyfriend Tom (Victor Mojica) also has a tenuous connection to Nahalla’s actions as well and all of them slowly begin to realize what’s really going on. Tom knows of an old shaman named Ocasio (Frank Salsedo) who might be the only person who knows how to stop the evil shaman’s spirit but will he help them and at what cost? The story is a gripping one and although it does move sloooowly, it’s never boring. The script is intelligent and all the actors do a pretty good job of making it sound convincing although there are a few scenes of the killer bugging his eyes out ridiculously as he stalks his prey. 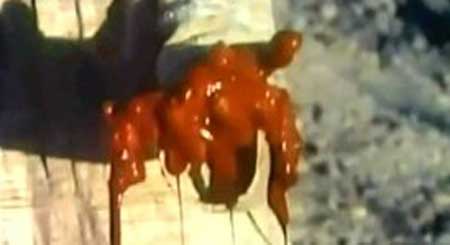 And it even has a pretty unexpected & chilling ending to boot! It might be looked at as cheesy now but I think if I had seen this when it was originally released the ending might have scared the crap out of me, as it stands it’s still pretty creepy though. I really liked the fact that I could actually SEE the ending as well. Which brings me back to my biggest gripe with the movie… I really can’t say whether it’s just terrible cinematography or a really bad transfer but if I can’t see most of a movie, how can I truly enjoy it? “The Ghost Dance” had potential to be just a cut above the average slasher flick (And when it comes down to the nitty gritty, it IS a slasher flick) but I need to see the blood flowing if that’s the intent the filmmakers were shooting for. 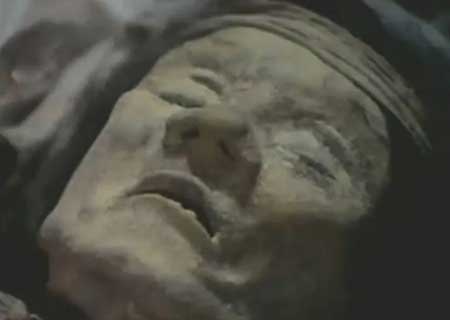 This was Buffa’s first and only directorial effort and I’m sorry for that because he knows how to frame a shot & there are some pretty nice set up’s sprinkled to & fro here. He also knows how to write a pretty decent script judging from what I got here, I wish he had continued to ply his trade and make another film but alas, this was both his debut & his swan song in one fell swoop. Three shrouds for “The Ghost Dance”, a nifty little slasher that’s well worthy of watching if you can catch up to a copy of it. But prepare yourself for a tough slog squinting at the screen trying to make out what’s going on underneath all of the darkness. 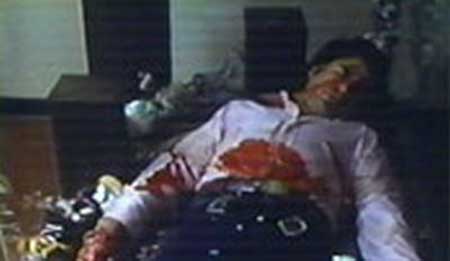 My editor FINALLY sends me a good one and I can’t see most of it! Can you say “Sadistic”?