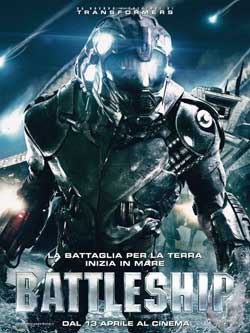 A fleet of ships is forced to do battle with an armada of unknown origins in order to discover and thwart their destructive goals.

What is it with Hollywood & Taylor Kitsch all of a sudden? More importantly, what is it with Taylor Kitsch being cast in not one but TWO movies with $200 million dollar budgets this year? Does Hollywood know something we don’t? Maybe they do…maybe they don’t. Last month’s “John Carter” was supposed to be Disney’s big “Tent Pole” movie and it tanked so badly that the exec that green lit it’s production resigned shortly afterward. Now we have Taylor as the lead in Hasbro’s (& Paramount’s) production of “Battleship” which is based on the classic strategy game that’s been around for ages. I must admit that when this was first announced a few years back I thought it was a joke. I had no idea how anyone could pull it off and when I found out what they were spending on it? I smelled a failure of epic proportions… 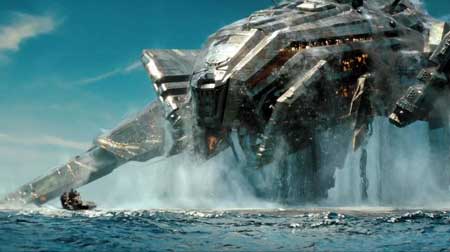 Directed by Peter Berg (who has a blink & you’ll miss him cameo here as well), “Battleship” begins with the discovery of a planet very similar to Earth. So similar that someone got the bright idea to try & contact the planet directly assuming that since it’s so similar to our big blue marble that there might be intelligent life on it. Well someone got the signal but they aren’t as friendly as we’d hoped they’d be. As a matter of fact they’re downright surly and itching for a fight. So they start making their way across the galaxy looking for one!

Meanwhile we’re introduced to the Hopper brothers Stone (Alexander Skarsgard) & Alex (Kitsch), both of whom are officers in the US Navy. Stone is a commander & his younger brother is a Lieutenant. Alex is also something of a screw up as well, someone who hasn’t lived up to his full potential both in the Navy & in his personal life as well. On the eve of an international gathering of naval units participating in joint maneuvers, Alex gets into a scuffle with a Japanese officer and finds out that he is to be discharged from the navy when his ship returns because of the fight & other infractions he’s had in the past. But just as he resigns himself to his fate, the aliens hit the water. Alex is still a lieutenant and as such he is ordered to take a gunboat out to the large craft floating in the water to investigate. Of course, things don’t go too well and the game begins. 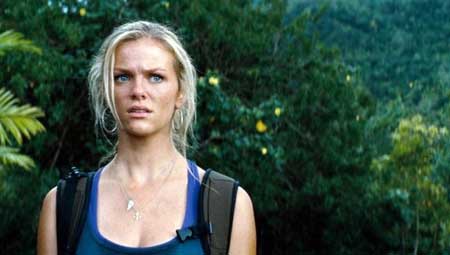 Now I use the word “Game” literally because the movie is based a game. How does the movie pull this off? Well, the aliens surround themselves with a large force field that keeps all of the other ships unable to attack them. But a few ships are close to the alien craft so they are on the inside of the field, in firing range of the alien craft. It’s here we get the first of many overhead shots of the alien ships on one side of the force field & the battleships on the other, just like in the game. The way the game is integrated into the plot of the movie might strike some as corny but I actually thought it was kind of interesting and worked well within the guidelines that the script set up. 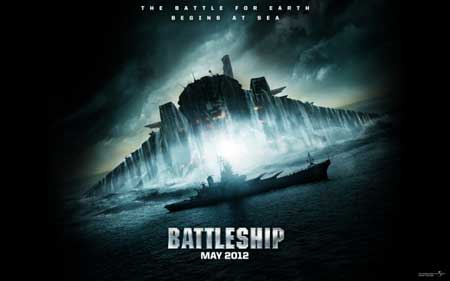 Now to be fair, while this movie is very entertaining it’s massively dumb as well. For instance, why can the aliens fly across the galaxy to get to Earth without incident but crash into a satellite just before entering our atmosphere? They didn’t hit anything else on the way over & I’m sure they had to pass by an asteroid field or two! Why does the alien battleship wipe out a giant cruiser that seems to be a couple of miles away but fail to destroy the rubber gunboat right in front of it? And why the heck is Rihanna (Yeah…she’s in it) always sweaty? I mean she’s sweating from the first scene she’s in till the end. I know it’s hot in Hawaii (Where the film takes place) but no one else is sweating at the beginning except for her. And why is it seemingly standard practice to include AC/DC songs on every action film soundtrack as of late? Not that I mind but it is starting to get a little hoary. Most of the dialogue is laughable as well, If I hear ANYONE say “Yes Sir”! in the next 24 hours I might slap em’ on the mouth… 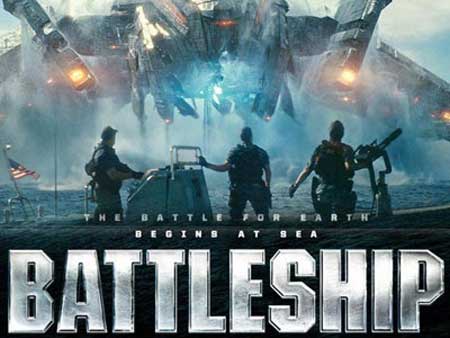 But despite the massive stupidity of all the goings on I was entertained & so was the audience I saw it with. Once the script gets past a feeble attempt at giving us some character background it’s pretty much balls to the wall action till the end. And the last 30 minutes of “Battleship” is so ludicrous that I had to respect it in a “WTF” kinda way. It’s a mash up of “Transformers”, “Pearl Harbor”, “Titanic” (Yeah..it’s in there) & maybe a little “Battle L.A.” tossed in for good measure. And although that sounds like a mess, it sorta works in a really “Duh” kinda way. Everyone laughed & even applauded a few times towards the finale, everyone except me of course. The Black Saint does not applaud anything in public. Might mess up my image…. 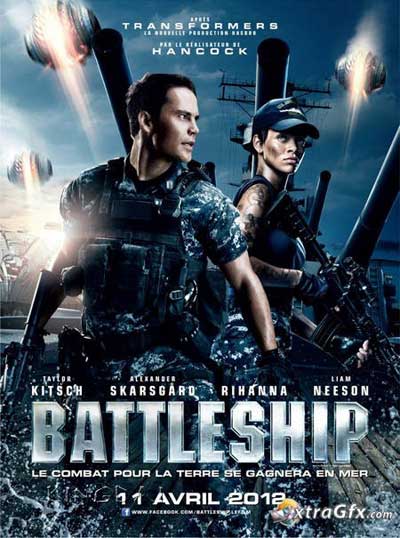 I really was expecting to hate “Battleship” with a passion and even though it gave me ample reason to dislike it, in the end I (With a great deal of shame) ended up liking it quite a bit. Never boring, Great special effects, actors speaking silly dialogue with serious looks on their faces & a sweaty R & B singer made for a fun evening at the theater. By the way, Liam Neeson (Although featured prominently in all of the commercials/trailers for the movie) is actually in it for about 15 minutes total, he probably filmed his scenes in a day. Stick around and wait for the credits to end for a little extra added bonus as well. Three shrouds for “Battleship“, a really good “Bad” movie!

I wonder if “Candyland” is gonna be this much fun?