Researchers in Antarctica are abducted by a team of masked storm troopers. They are dragged deep underground to a hidden continent in the center of the earth. Here Nazi survivors, their bodies a horrifying patchwork of decaying and regenerated flesh, are planning for the revival of the Third Reich.

Just when you think that you’ve seen it all, a movie comes along that just leaves you wondering how the hell that movie was made. The movie was completely ridiculous in every way. This wasn’t a good movie in any way. It was horrible, a mess, and it’s so damn bad it’s good. I’m not sure that was the intention (though they had to know how bat-sh*t crazy the idea was) but “Nazis at the Center of the Earth” is so-bad-its-good. Without question, this film has to be seen to be believed and I hope that it gets some sort of recognition. “NATCOTE” is the most recent film released by The Asylum. I think I have only watched one other from their library (a “Sherlock Holmes” film) but if this is any indication of their others, I may have to watch a few more.

Two Antarctic scientists are out drilling into the ice when they hit something. The snow is cleared and they find a large Swastika. They are then immediately kidnapped by Nazis in gas masks. They are then taken to the evil Dr. Mengele (Christopher Karl Johnson). He has been long thought dead but living below the Earth conducting experiments on humans. He gives kidnapped virologist Dr. Paige Morgan (Dominique Swain) the chance to live if she agrees to help him. The remaining researchers, led by Jake Busey as Dr. Reistad, try to find the missing members of their team. In their search they find a deep hole beneath the surface that leads them to a world beneath the surface, run by Nazis. They partake in hideous experiments to figure out how to sustain the flesh they are trying to create for their new bodies. 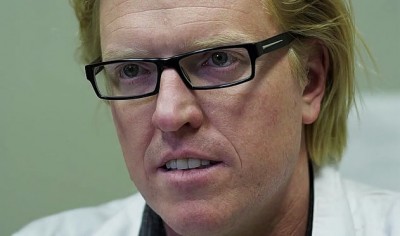 I couldn’t help but notice that the acting in this film was horrible. Christopher Karl Johnson gives his all and turns in the only great performance. The rest of the actors either were just plain bad or just there for a tiny paycheck. Even veteran (if they can be called that) performers Jake Busey and Dominique Swain seemed to be just spewing the lines. I’m not even sure they understood half of what they were saying. Many of the characters spend way too much time stating the obvious. That drove me nuts. For example, red in the snow, someone has to say, “Its blood”. We see long drag marks in the snow then someone has to say, “It looks like drag marks”.

I have to admit, the practical effects in the film look pretty damn good. There’s a scene where someone gets the skin on their face torn off and it was bloody great. There was actually some pretty gruesome stuff in here. There was Nazi zombie rape, abortion, and the previously mentioned skinning. The final act of the film is when things get rolling and for the final thirty minutes alone are worth sitting through the first hour. Even with the horrible acting and video game quality effects, I couldn’t help but laugh out loud and enjoy the film. 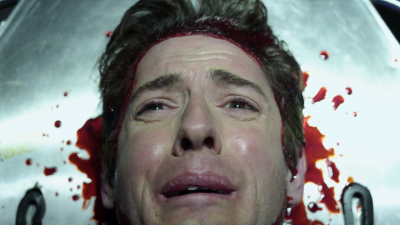 If you’re an Asylum fan and watch “Nazis at the Center of the Earth”, I want you to tell me if all their films are as out there and crazy as this one. I may just go back to catch a few. It was weird, I was just sitting there watching the film and kept laughing out loud. I was having fun with it. A movie doesn’t have to have some big profound moments or make a statement to be fun. If you can have fun with it, if it makes you laugh and maybe smile a bit, then you have a winner on your hands. “NATCOTE” fits that criteria and as ludicrous of an idea it is, the entertainment value is still there. I’m giving it *** (out of 5) only because the idea is messed up and the end truly is unique, crazy, and bizarre. 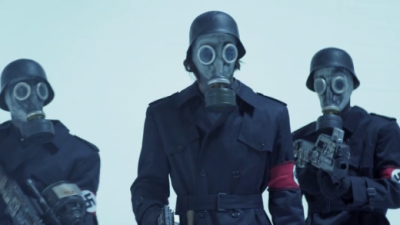