PLANET OF THE VAMPIRE WOMEN is an action-packed sci-fi adventure of the galaxy’s sexiest space pirates who pull off the ultimate heist only to crash into a nightmare world of unrelenting horror!

It isn’t often that I see something new that causes me to revert to being an adolescent aside from the things that I had discovered during that timeframe in my life. For some reason, watching the film “Planet of the Vampire Women” did that for me. As outrageous and silly as the film may be, there is a certain charm that brought out that young teenage boy in me that had my eyes glued to the screen. Not so much for the ever so enthralling story, more for the incredibly lovely women that grace the screen. Everything about the film just screams ridiculous, but there was never a time during the film that I didn’t have a smirk on my face.

A group of space pirates pulls off a major heist aboard a casino ship. With only a few minor issues, they think they have made it away clear and free. The law is close on their tail and their only option is a moon planet where they have to make a crash landing. A strange force quickly takes over the captain’s body and she disappears. The remaining crew reluctantly teams up with the law when they realize that they are being picked off one by one and turning them into undead bloodsuckers. 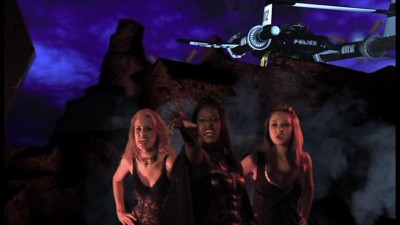 Director Darin Wood does a fantastic job with the visual look of the film. These aren’t “Avatar” like effects, they are ludicrous and hilarious. From my research, I have gathered that this film cost roughly around $25,000 and I would have guessed much more than that. As low budget as it looks, I would have thought they had spent at least triple that of what they did. The film is filled with vibrant colors which accents the playfulness of the picture.

This is a film where only two of the main cast members are men. The rest are all very talented and lovely women that are fully capable of carrying the film. Most importantly, they get what type of film this is and have fun with it. Keith Leti as Automatic Jones and Jawara Duncan as Sgt. Falco breathe life into their characters. Not just one dimensional and both have strong personalities. My favorite actress in the film was the villain played by Pacquita Estrada, a tough as nails leader that is turned into a vicious vampire hungry for blood. Her Captain Richards is a badass and a born leader. Also a standout is Liesel Hanson as Ginger. Once their captain becomes a bloodsucker, the rest of the crew needs someone to turn to and she steps to the plate. 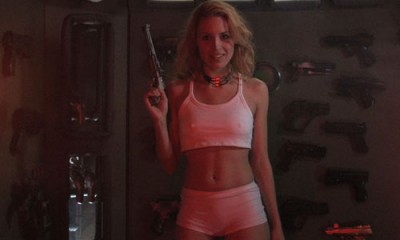 Well, I have held out long enough. I tried not to mention it but there is just no holding it back. There’s lots of boobies. All kinds of boobies, even bloody boobies. I tried counting all the sets of boobies but after ten, I just couldn’t keep up. Not all of the actresses bare them, but many do. That is what brought out my inner teenager. I giggled like a little boy seeing a boob for the first time. This is the type of film I would stay up late and try watching after my parents went to bed. The sexual situations are kept to a minimum, so you just get a lot of women getting their tops torn off. A very wonderful thing.

“Planet of the Vampire Women” knows what it is and does an outstanding job of that. A fun exploitation film that pays homage to cheesy sci-fi horror films of decades past. They use cardboard sets, outlandish sound effects, plenty of blood (that also include some nifty arterial spray and gore), and more boobies than any one person could handle. I have no problem giving this film *** (out of 5). My only complaint is that the film felt like it was beginning to over stay its welcome a bit but overall this film is just plain fun. 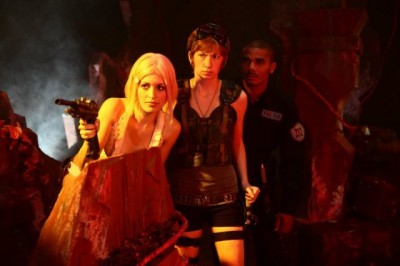