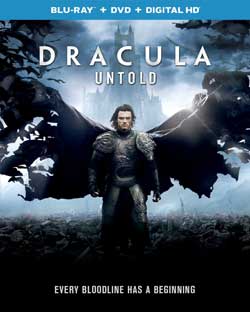 The prince of Transylvania, Vlad Tepes, must choose between his duty and his people when the Turks demand 1000 of his boys for their army. Facing unbeatable odds, Vlad takes a dark path that will change his life forever.

Universal is ready to create their own franchise driven cinematic universe targeting the Universal Monsters as a supernatural “Avengers” with Wolf Man, Mummy, Frankenstein and Creature from the Black Lagoon waiting in the wings. Up first, however, is Dracula Untold from director Gary Shore and writers Matt Sazama and Burk Sharpless presenting a modern take on the lord of the undead set during Vlad’s reign in Transylvania just prior to his transformation into the vampire Dracula. The result is action heavy, nearly bloodless, lacking in horror and steeped in PG-13 fancy violence. Still, Dracula Untold is briskly paced, adequately acted and moderately entertaining. It does not suck, pun intended. Luke Evans makes for a decent Vlad, the impaler with a desirable wife, Sarah Gadon as Mirena, and a brave, impressionable son, Art Parkinson as Ingeras. It manages to set itself apart from other Dracula films with the minor exception of the flashback scenes from the Francis Ford Coppola directed Bram Stoker’s Dracula (1992). While a less than impressive start to Universal’s dream team, it does not fall flat on its face keeping hope alive for future films in the franchise. 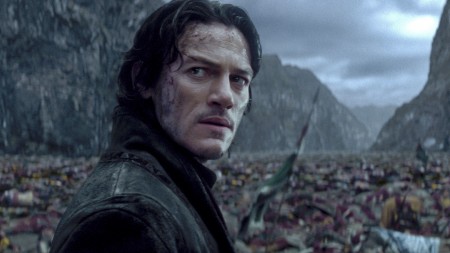 Dracula Untold quickly established Vlad the Impaler as the Prince of Transylvania who once destroyed his enemies evoking the familiar enemies on spikes visual. Now ruling over his people, Vlad is married to Mirena, together they have a child Ingeras who is the age Vlad was when he was torn from his family and sent to war. It is not long before the Turks demand one thousand of Transylvania’s young to join their army, a price Vlad is not willing to pay. His back against the wall, he choses to fight and starts a war. Fearing the worst, he ventures to the top of a nearby mountain where a supernatural creature of the night hides in the caves high above the land. Vlad bargain for strength to defeat the army and in turn he is cursed to become a vampire. Able to use the vampire’s power for three days, he will revert back to his former self if he can resist the urge to drink human blood. The fight is on with Dracula facing a 1000 man army.

Luke Evans makes for a heroic Dracula which is something in itself that is a bit…odd. Evans is tasked with taking a character typically shown as a villain and make his turn into a sympathetic role – like showing Darth Vader as a hero. He embodies his character with strength and determination even if the character is forced to make some questionable choices. He has the charisma to make is all work. He also strikes a modern Dracula but is not allowed to bare the fangs nearly enough during the brisk 92 minute run time. He is at his best as Vlad discovers the powers gained by becoming a vampire and, later, facing side-effects of his new life style. He also sells that everything he is doing is to protect his people and, more importantly, his family. This honorable intention is interestingly juxtaposed against a violent temper. Given a little more room to explore the role, it promises a challenging character for future films.

Director Gary Shore does a great job of setting up the action and composing the scenes. He and his editing team create a winning beat to the film as it goes from one key scene to another never languishing in one spot long enough to become bored or to realize that the story may be just a bit too silly. He wisely stays focused on Vlad and his family only allowing the closest of villagers to support them. This allows the motivations behind Vlad to take root and remain core to the film. That intimacy, Vlad trying to save his family, allows the action to flash by without too much worry. The investment is minimal, the action is serviceable and the violence is tolerable for the best of date movies making for an entertaining escape. 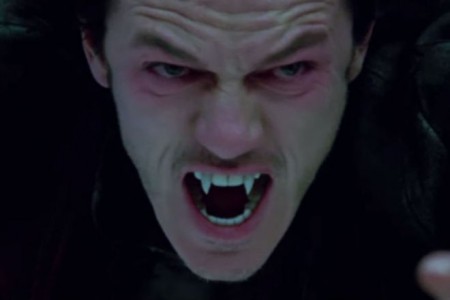 Dracula Untold is a peculiar beast. It is not a terrific movie, but it manages to be unoffensive. A back handed compliment sure, but the result is a bit of a surprise. Despite the marketing coming across as promising a complete disaster, the film manages to entertain despite itself. Gary Shore’s Dracula Untold is well paced with an emotional core, decent CGI effects, lush landscapes and rousing action. Luke Evans, Sarah Gadon and Art Parkinson make for a solid family, even if the patriarch is Vlad, the Impaler. Charles Dance is effectively creepy as the master vampire in the mountain as his fingers defiantly skirt down Vlad’s blade. The film is completely lacking in anything remotely close to horror despite Dracula, Dance and an army of vampires. Regardless, it is miles above Twilight in respect to most horror fan’s appreciation to toothy undead. Dracula Untold is the smarter, younger brother to this year’s I, Frankenstein.

Bonus Features on Blu-ray™ and DVD
· Day in the Life – Luke Evans – Personal moments with the film’s star provide a glimpse into life on set.
· Dracula Retold – An exploration of the production, including costumes, sets and how the real history of Dracula is woven into the story.
· Slaying 1000 – A behind-the-scenes look at the making of Vlad’s epic battle against an army of thousands, from the script and visual effects.
· Feature commentary with director Gary Shore and production designer François Audouy.

Dracula Untold is now available on bluray per Universal