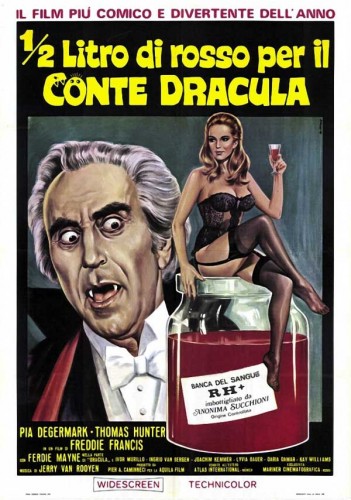 “An American actress inherits a castle in Transylvania. What she doesn’t know is that her ancestor, the Baroness Catali, was in actuality a vampire countess, and emerges from her tomb to ravage the nearby village and Catholic seminary.” (courtesy IMDB)

If you’re looking for a serious movie, you may find yourself wanting to bitch-slap me for subjecting you to The Vampire Happening (1971), so all you armchair critics out there should know right now this is not a serious horror drama, but a light-hearted comedy. The reviews I read were extremely misleading, making it sound like some sort of Euro-Trash sexploitation title. Well, it’s not. The Vampire Happening is a sexy horror comedy. It’s also very much a period piece, which is a polite way to say it hasn’t aged very well. The director of this week’s debacle, Freddie Francis, was photographer on such films as The Innocents (1961), The Evil Of Frankenstein (1964) and Doctor Terror’s House Of Horrors (1965), and went on to wide acclaim as David Lynch’s favourite cinematographer on The Elephant Man (1981), Dune (1984) and many more. So get your best hippy gear on and drag out the bean-bag as we party on at the love-in known as The Vampire Happening! BYO lava lamps.

During the course of my lengthy career I have come to a simple, if not quite fully developed conclusion about most Vampire movies. They usually fit somewhere between Silly-But-Sexy and Camp-Comedy, with the odd Gothic movie that takes itself far too seriously. But there are few films that blur their focus to the point of defying categorisation quite like this film.

Originally released in 1971, The Vampire Happening infuses the horror genre with bawdy humour, absurd gags and subtle in-jokes for vampire buffs, and vampires in the buff. It clearly wants to be another The Fearless Vampire Killers, Or Pardon Me But Your Teeth Are In My Neck (1967), so much so it even has Ferdie Mayne reprising his role from Roman Polanski’s film. But unlike Polanski’s film, The Vampire Happening has a significant number of breasts, a severely anti-clerical stance, and some extremely unsubtle humour. The film’s underlying style is more like Benny Hill meets The Groovy Ghoulies and, combined with the psychedelic sex scenes, it looks like director Freddie Francis was possessed by the spirit of Ken Russell.

This rather bawdy tale was conceived (possibly while drunk) by Italian producer Pier Caminneci, who cast his own beautiful wife Pia Degermark – twice. Pia plays the beautiful American Betty Williams, who travels to her ancestral home in middle Europe and resurrects her vampire ancestor, also played by Pia. This is a cue for the expected mistaken identity scenes, leading up to both of them attending the annual exsanguinators convention, with the guest of honour being Count Dracula himself. Pia doesn’t do too badly with her dual-role and when she finally meets herself, it’s strangely touching. Hmm, that didn’t sound quite right…

The Vampire Happening was made in West Germany, and features a lot of actors you may not have heard of – for good reason. Miss Niessen is played by Ingrid Van Bergen who, six years later, shot her husband dead and was sentenced to seven years but released after five. As revenge upon the society that imprisoned her, she went on to win the German version of I’m A Celebrity Get Me Out Of Here in 2009.

Another name that may not be familiar to you is writer August Rieger, who wrote over forty films including such dodgy titles as Help I Love Twins (1969), The Hostess Exceeds All Bounds (1970), Hurrah Our Parents Aren’t There (1970), and When The Mad Aunts Are Coming (1970), so this film’s title, translated from the original German as I Only Bite At Night, is no exception to the rule. In fact the cast is full undistinguished thespians such as Raoul Retzer, Toni Wagner, and Michael Janisch, and proved to be the undoing of Oskar Wegrostek, Kay Williams, and Lyvia Bauer, this being their final film. Bad luck comes in threes, which means you’re going to read about two more terrible films after this one.

With all these obscure Europeans the producers needed a name actor to attract US audiences, but all they could afford was Thomas Hunter, who is perhaps best not known as American GI Number Three in What Did You Do In The War Daddy? (1966). So as you can see, that plan didn’t come to fruition – he had them standing in the aisles shouting “Who?”

The sub-plot involving a priest and his novice leads to what might be the film’s most memorable sequence, in which the novice witnesses sex taking place everywhere he looks – a bit like Fred Nile. The Happening itself is almost indescribable. It comes near the end of the movie, and looks like a cross between a giant seventies drug party and an adult swingers get-together complete with an undead rock band called Birth Control who, surprisingly, are still performing today. Did I mention that there’s toe-sucking, and Dracula flies in – by helicopter? No? Well, you’ll just have to watch the movie then.

The end of The Vampire Happening clearly sets up a sequel in America, more in hope rather than expectation, I suspect. It’s true, the leering performances make Rodney Dangerfield look subtle, the slapstick gags are undercut by indifferent execution and the entire production lumbers under bad makeup and atrocious dubbing – but Ferdie Mayne obviously has a blast as the delightfully decadent Dracula, and Pia Degermark proves to be a good sport, giving a spirited performance while disrobing at almost every turn. Keep that image in mind for the next seven days, and join me again next week so I can poke you in the mind’s eye with another pointed stick from the faggot formerly known as Hollywoodland for…Horror News! Toodles!