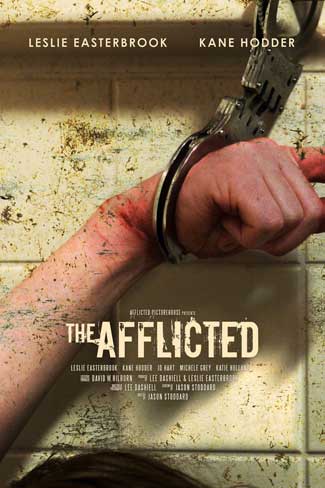 A story of incomprehensible abuse delivered by an explosively violent mother of four. Journey through the mind of a child that experiences a living hell, defined and defended by the twisted religious beliefs of her mother.

“The Afflicted” is an incredibly depressing film. One that leaves you with a bad taste in your mouth and feeling a little bit dirty. At the same time, when it was over I just wanted to grab my daughters and hug them. This is a film where the horror that is present is all too real. And even more disturbing is the fact that it happens. It probably happens more than any of us can imagine or would want to. What stands out here more than just the story is the performance of Leslie Easterbrook, she really goes for broke here and nails every moment of it. We have seen her play crazy before (I preferred her performance in “The Devil’s Rejects” to that of Karen Black’s as the same character in “House of 1000 Corpses”), here she just really scared me. I’ve seen many true life crazy mother films, the first being “Mommie Dearest”, but this one really hit me hard. Not quite as hard as Jack Ketchum’s “The Girl Next Door”, though it hit me in a similar fashion. It’s worth watching at least once and Easterbrook deserves some recognition for delivering a truly frightening character.

Maggie (Leslie Easterbrook) is the mother of four children, Cathy (Michele Grey), Carla (Katie Holland), Grace (Randi Jones), and Bill (Cody Allen). It’s Carla’s birthday and everyone seems happy. Except for her husband Hank (Kane Hodder), something is brewing in his mind, he knows that something is wrong with Maggie. Late in the night Hank packs a bag and attempts to leave. Maggie confronts him and things start to come to light. He needs time to figure things out and he now knows that she isn’t all there. Maggie refuses to let him leave and kills him, hiding the body in a freezer out in the shed. The kids are led to believe that their father has packed up and left them.

Things take a horrible turn and the torment that the girls begin to endure at the hands of their mother becomes unbearable. They are beaten, deprived, and raped. Their brother is favored by Maggie and he does everything that is asked of him. There is no one to help them and the only friend they have is local preacher Cowboy Profit (J.D. Hart), who is failing to see what is happening right next store. 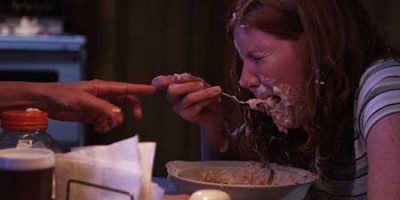 True life horror is never entertaining to watch. There is a dark seed in all of us that has a need for this type of content. It’s more of a fascination thing with how the human mind somehow ends up being so twisted in certain people. Leslie Easterbrook takes charge and shows us just how strong of a talent she truly is. Maggie’s religious beliefs become twisted and how she takes them out on her kids is terrifying. Based on the real-life case of Theresa Knorr, the film really captures the horror that these kids endure. The performances are all terrific and it must be said that Kane Hodder is becoming quite the actor (though he also served as the films stunt coordinator). It’s good to see that filmmakers are realizing that he is more than just a movie monster.

First time feature director Jason Stoddard captures the very real horror in a way that is more heart wrenching than exploitive. Not always an easy task but appears to do it with ease. He also uses the music of Brother Dege in a way that hearing his vocals mixed with the emotion in the film that it made my stomach ache.

“The Afflicted” is a very sad and dark film. This film isn’t meant to entertain, it hits you in the gut. Leslie Easterbrook is getting a round of applause from me for her role here and Kane just keeps getting better. I wish I had seen the film before this past weekend so I could have discussed it when I saw him. **** (out of 5). The film deserves a 5 but I’m only giving it 4 because it depressed me on my day off. Not for everyone, “The Afflicted” will strike a chord with your emotions.