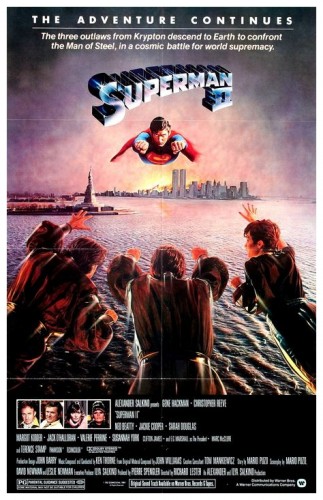 “A group of terrorists seize the Eiffel Tower and threaten Paris with a hydrogen bomb if the French government does not meet their demands. Superman immediately heads to Paris, where he launches the elevator carrying the bomb into outer space before it can detonate. Unfortunately, when the bomb explodes, it disintegrates the ‘Phantom Zone’, where three Kryptonian criminals had been imprisoned years before by Jor-El. Immediately, the three criminals, led by the psychopathic General Zod, head to Earth with the intention of enslaving the people Superman protects. The Man of Steel, however, is unaware of their arrival, and is forced to sacrifice his powers for a life with Lois Lane. When he finds out about Zod and his companions, Superman returns to the Fortress of Solitude to regain his powers and confront the horrible Kryptonian criminals – on his terms. Can Superman defeat the three villains who are armed with identical powers to his own?”

In Superman The Movie (1978), three criminals on Krypton were cast into the Phantom Zone, locked in a kind of time warp. When Superman (Christopher Reeve) hurls a terrorist group’s hydrogen bomb into outer space so it won’t explode in Paris and kill Lois Lane (Margot Kidder) and, oh yes, millions of strangers, the explosion releases the criminals from their prison. Evil Terence Stamp, striking-looking Sarah Douglas and brutish Jack O’Halloran arrive on Earth, determined to take over. Since they have superpowers, only Superman has a chance against them. But Superman has gone away to his Arctic Fortress Of Solitude with Lois, whose feeling that Superman and Clark Kent are the same person has finally been confirmed. Superman decides to give up his immortality so he can have a sexual relationship with Lois so, just when the world needs him most, he is unable to help. 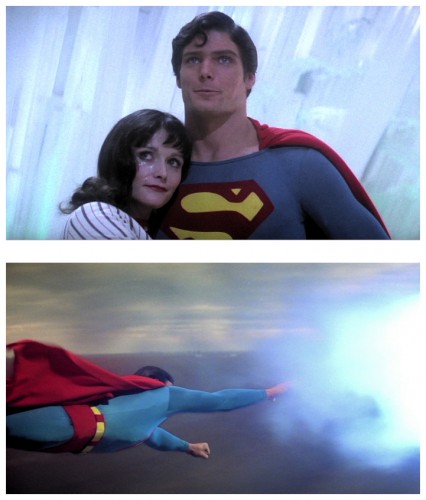 Superman II (1980) received better reviews than the first film, but I don’t think it quite reaches that high level. The early scenes, before Superman reveals his identity to Lois, are either awkward or too slick, resembling a James Bond film. But once Superman and Lois arrive at the fortress, the film begins to exhibit some of the magic of the original. It’s surprising that Superman and Lois finally make love, and it’s fulfilling for those who read those comics for years waiting for Lois and Clark to get it on. Unfortunately, Superman has succumbed to the lure of Lois, and potency in bed proves to be incompatible with potency of the super-muscular variety. He is like the wizards of yore whose magic was tied to celibacy – to become a lover, he has to relinquish his Superman image, although some viewers despised this demystifying of America’s great icon. 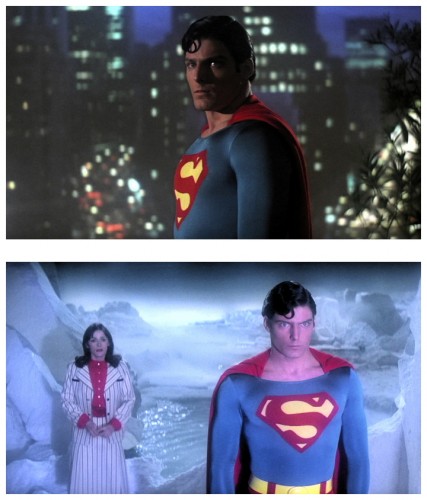 Superman’s big decision is indeed provocative, and the battles of muscles and wits between Superman and the three villains, in Metropolis and at the fortress, are quite spectacular, but my favourite scene has Clark returning to a snowbound diner where a tough-guy beat him up while he didn’t have his powers – now that he has regained his strength, he exacts satisfying revenge – the Superman of the classic comics would never stoop to being so human. But all ends well in the highly entertaining and protracted finale, where enormous chaos is wrought by all combatants in a sequence as close to the anarchic tableaux of comic-strip imagery as the cinema had ever reached until that time. 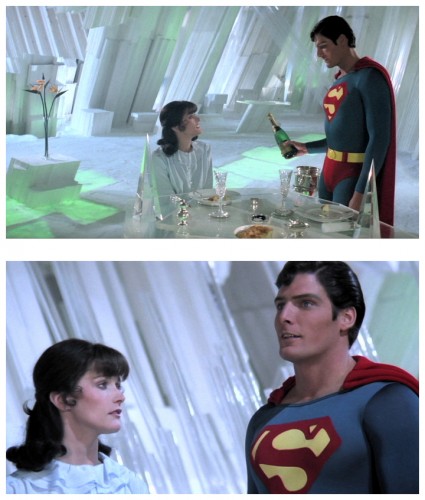 Directed by Richard Lester, whose previous films had contained fantasy elements, notably the two Beatles films A Hard Day’s Night (1964) and Help! (1965), but his only fully-fledged genre film, The Bed Sitting Room (1969), had sadly been a misunderstood flop. When Lester replaced Richard Donner in the director’s chair, the emphasis shifted from mythic resonance to an ironic humour. Lester rejected the epic look that Donner had given Superman The Movie. Imposing his own control over the Superman saga, Lester took advantage of the death of Donner’s cinematographer, Geoffrey Unsworth. Lester scrapped most of Unsworth’s epic footage and hired cinematographer Robert Paynter to create a comic book-style that would evoke Superman’s literary roots. Working with Lester, Paynter developed a different type of framing from the original, replacing Unsworth’s gliding camera with horizontal panning and static framing to evoke the comics, frames crammed with people and objects. Furthermore, the action was photographed from one angle to give the film a desired flatness. All this added to the on-set friction caused by Donner’s dismissal. 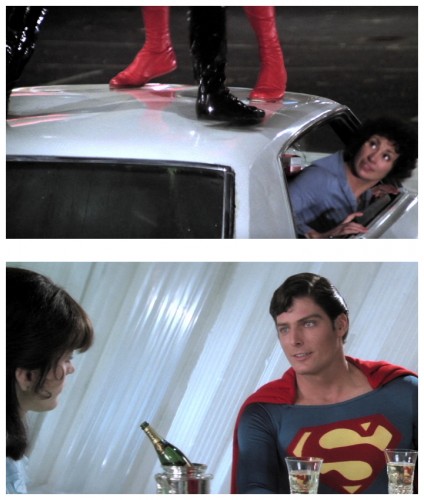 In a 2004 interview, Kidder claimed that Donner had shot enough footage to make his own cut of the film. A website then initiated a petition for Warner Brothers to allow Donner to reconstruct his own cut of the sequel. This claim proved to be correct and the footage was re-edited into Superman II The Donner Cut, recently released on DVD. Scenes include Superman flying past the Concorde, extra dialogue between Lex Luthor (Gene Hackman) and Otis (Ned Beatty) in prison, and extra dialogue between Luthor and Eve Teschmacher (Valerie Perrine) concerning the Fortress Of Solitude. Nearly fifteen minutes of extra footage with Hackman has been reinserted, including a pivotal scene within the Fortress where Luthor begs forgiveness from Superman, who reluctantly decides to risk trusting him. 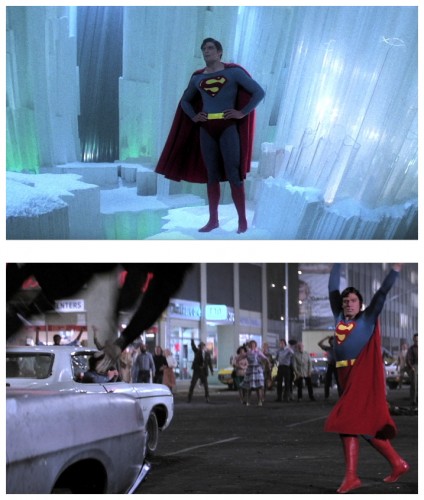 Lester also directed Superman III (1983), in which Superman is humanised even further, a slightly incoherent concoction that has comedian Richard Pryor cast (or miscast as the case may be) as a super-villain against his own better judgment. Superman has a new romance in the third film, with the convincing Lana Lang (Annette O’Toole) who interestingly falls for Clark Kent, where Lois Lane had gone for the man in blue and red underwear. But Superman is badly affected by some synthetic kryptonite and turns nasty. He takes to brooding in bars and sneers at a woman in trouble, “I hope you don’t expect me to save you, ‘coz I don’t do that nice stuff anymore.” After a metaphorical fight between his good and bad selves, everything turns out all right. We may feel a legitimate dismay at the distance we have traveled from Superman as a dignified incarnation of slightly priggish human decency, but there is no denying that Richard Lester had few equals as a choreographer of comedy. The long opening sequence of escalating slapstick gags that begins with a pretty girl walking past and ends in total chaos is probably finer than anything since the days of Mack Sennett. 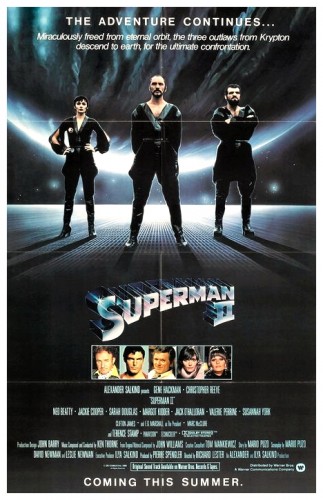 But that’s another story for another time. All I really wanted to say is that if you haven’t seen Superman II yet, it’s awfully important that you seek out the greatly enhanced Richard Donner cut of the film on DVD, which has plenty of special features concerning the behind-the-scenes drama involved with the making of the Superman saga. Please be sure to join me for next week’s edition of Horror News, because an old gypsy woman assured me that if you don’t read all our articles from now on, the entire world will be destroyed. Normally I’m highly skeptical of such claims, but she sounded so very certain, I feel you’d best not take the risk. So enjoy your week, and remember, the survival of the whole world depends on you. Toodles! 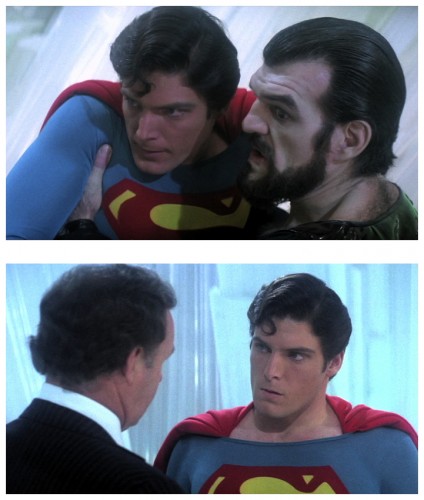 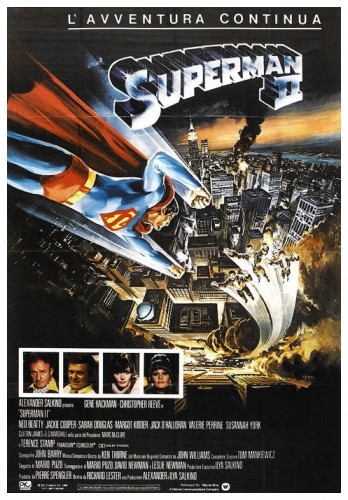