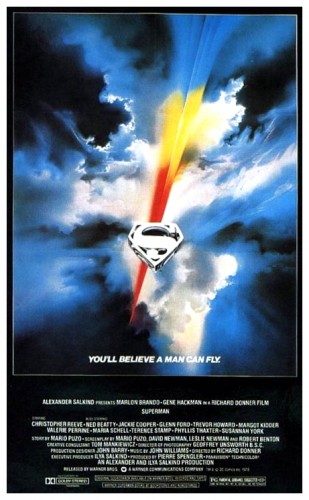 “Unable to convince the ruling council of Krypton that their world will destroy itself soon, scientist Jor-El takes drastic measures to preserve the Kryptonian race: He sends his infant son Kal-El to Earth. There, gaining great powers under Earth’s yellow sun, he will become a champion of truth and justice. Raised by the Kents, an elderly farm couple, Clark Kent learns that his abilities must be used for good. The adult Clark travels to Metropolis, where he becomes a mild-mannered reporter for the Daily Planet, and a caped wonder whose amazing feats stun the city: Superman! Meanwhile, Lex Luthor, the world’s greatest criminal mind, is plotting the greatest real estate swindle of all time. Can’t even the Man of Steel stop this nefarious scheme?” (courtesy IMDB)

There is quite a tradition of basing genre films on popular comics. These are not necessarily children’s films. After all, lots of grownups read comics too. For example, Barbarella (1968), Flash Gordon (1980), Popeye (1980) and Swamp Thing (1982), as well as made-for television adventures such as The Amazing Spider-Man (1977), The Incredible Hulk (1978), Doctor Strange (1978), and Buck Rogers In The 25th Century (1979). But of all the adaptations of the late seventies-early eighties, the most successful by far were Superman The Movie (1978), Superman II (1980) and Superman III (1983). All the Superman films are enjoyable, and so they should be, because they took astronomical amounts of money to make. The first two together cost over 100 million dollars, and it was partly because of the wildly escalating budget that Richard Donner, the director of Superman The Movie, was replaced by Richard Lester during the shooting of Superman II. In fact, parts of Superman II were filmed at the same time as Superman The Movie, but around a third of the second film consists of Lester’s work, filmed later. 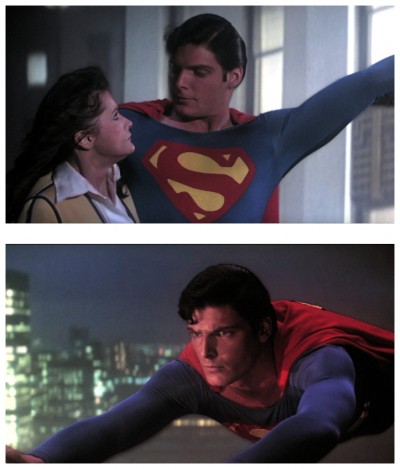 Both Donner and Lester had to learn a great deal about shooting special effects, and all three films use copious amounts of miniatures, rear projection, and blue-screen chromakey wire-work. But the success of the films owes more to a judicious compound of humorous and mythic elements than it does to special effects per se. Both the directors, and the screenwriters too, are obviously sophisticates. There is no shame for intellectuals in enjoying these witty and intelligent movies. For example, take the visual pleasantry of the second part of Superman, in which we witness our hero’s childhood in a Middle-America in the style of artist Norman Rockwell. The visual homage to a way of life that is itself every bit as mythic as Superman, a glowing never-was land of decent folk and rolling prairies, is very well done indeed.

What makes the film such fun is that it takes itself seriously just enough, not a parody or send-up in any obvious way, but there are tongue-in-cheek moments, many of the best arising out of the lasciviousness felt by Lois Lane (Margot Kidder) whenever she is in Superman’s company. In fact, the first time she flies with him in Superman is quite genuinely erotic, surprisingly so in this sort of film, and recalls my old friend Sigmund Freud’s insistence that dreams of flight are dreams of sexual intercourse, and it is precisely this blend of dreaminess and sensual excitement that Kidder’s performance captures.

Superman The Movie was a wonderful surprise when released in 1978, a blockbuster that would not have worked at all if the unknown Christopher Reeve hadn’t been the ideal choice to play the most famous of all comic-book heroes. Reeve’s Superman has the handsome square-jawed face of a classic movie hero, but he also has sweetness and playfulness in his eyes that make him completely un-intimidating…except to criminals of course. His body is strong and straight, but he doesn’t look like he got that way by spending time lifting weights. He is honest, kind, loyal, dependable and moral as he looks, but what makes him interesting are his secret desires, which make him a more complex character. He wants to be human, to give up protecting the world, so that he can be a lover to Lois Lane. This Superman is no innocent, he is attracted to women both romantically and sexually. He also evoked the sense of the ‘innocent abroad’ that was always part of Superman’s characterisation, even in the original comics of the thirties. Superman’s arrival in the bustling big city of Metropolis, the third sequence in the tri-partite Superman, is quite touchingly confusing for him – The Man Of Steel as Candide, the kid from the sticks. 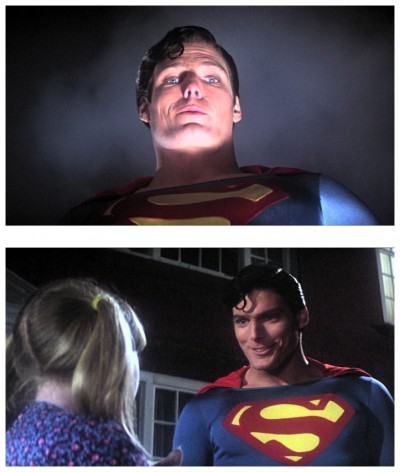 Numerous actors were considered for the part of Superman: Warren Beatty, James Caan, Burt Reynolds, Kris Kristofferson, Nick Nolte, Robert Redford, Arnold Schwarzenegger and Jon Voight. Eventually, the Salkinds cast the relatively unknown Christopher Reeve, who had only one other film and a television soap opera to his credit. It could’ve been worse: After the success of Rocky (1976), Sylvester Stallone lobbied hard for the role, but was ultimately turned down. Apparently Marlon Brando, who had casting approval, turned him down, just as he had vetoed Burt Reynolds’ casting as Sonny in The Godfather (1972). Stallone subsequently denounced Brando on The Merv Griffin Show, saying he had no respect for the superstar as an actor or as a man. This surprised many since Stallone, like Reynolds, had clearly modeled himself after Brando. Their mimicry is the reason Brando reportedly had such antipathy for both actors. Stallone later stated that it was hypocritical that Brando, who took the role of Jor-El simply as a paycheque and nothing more, vetoed him for the role of Superman. Ironically, in his review for Rocky, critic Roger Ebert called Stallone “the next Marlon Brando.”

The epic first film tells of Superman’s origins, beginning on the planet Krypton on the eve of its destruction, as his father Jor-El (Marlon Brando) prepares to send his infant son Kal-El to a distant planet called Dirt…I mean, Earth. It shows him growing up in Smallville as Clark (Jeff East), the adopted son of Ma and Pa Kent (Phyllis Thaxter and Glenn Ford). Reeve makes his first appearance when the adult Clark Kent, a bumbler who wears glasses and acts fearful, arrives in Metropolis to work for The Daily Planet newspaper. There he meets quirky, spirited, beguiling Lois Lane, Bombastic editor Perry White (Jackie Cooper) and friendly Jimmy Olsen (Marc McClure). Most everyone in the country, including Lois, is raving about Superman and his mighty deeds since he turned up, which also happens to be about the same time that Clark makes his first appearance. In his first movie adventure he attempts to stop the diabolical Lex Luthor (Gene Hackman) – un-ably assisted by his henchman Otis (Ned Beatty) and his girlfriend Eve (Valerie Perrine) – from causing California to drop into the ocean so he can make a real-estate killing as owner of the new waterfront. 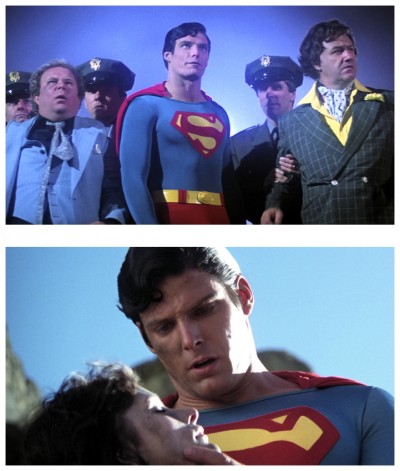 Scripted by Mario Puzo, David Newman, Leslie Newman and Robert Benton, the film smoothly mixes myth, lyricism, comedy, science fiction, romance, suspense and tragedy. I’m not a big fan of the broad comedy involving Lex Luthor and his cohorts, but the one plot element that really disturbed me was Lois’s death, which is rather painful to watch – never matter that Superman brings her back to life, because the way he does it just seems like cheating. Also starring Susannah York, Trevor Howard, Jack O’Halloran, Maria Schell, Terence Stamp, Sarah Douglas and Harry Andrews, with a memorable score by John Williams and impressive photography by the late Geoffrey Unsworth, Superman The Movie was produced by the now infamous father-and-son team of Alexander Salkind and Ilya Salkind. 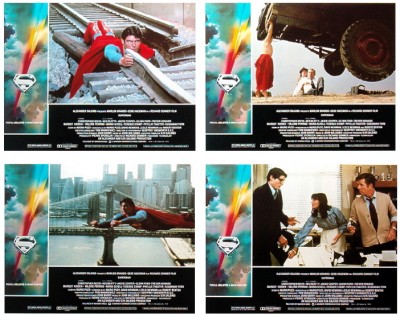 During post-production on their version of The Three Musketeers (1973), the Salkinds realised that there was enough footage for two films and created The Four Musketeers (1974) the following year. Most of the actors were incensed that their work on the long shoot was used to make an entirely separate film. All Screen Actors Guild member contracts now have what is known as the ‘Salkind Clause’, which stipulates how many films are being made. An unethical Hollywood producer? Well, I never! With this thought in mind and tongue in cheek I’ll ask you to please join me next week when I burst your blood vessels with another terror-filled excursion to the underbelly of the dark side of cinema for…Horror News! Toodles!