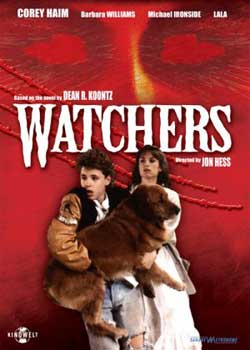 Based on a novel by Dean Koontz. A boy takes in a stray dog, later finding out that its an ultra-intelligent runaway from a genetic research lab. Unknow to him, the dog is being stalked by another escaped creature thats not quite so friendly

Based on the bestselling novel by Dean Koontz, WATCHERS tells the story of Travis Cornell, a former Delta Force operative going through a very dark time in his life. Exploring a canyon near his home, he is befriended by an extremely intelligent golden retriever who has excaped from a top secret G-14 Classified government lab. Travis takes the dog home and names him Einstein. Hot on the trail of and full of hate for said dog as well as any human beings that are unfortunate enough to get in its way is the Outsider, a terrifying genetically engineered creature created in the same lab as Einstein. Together, Travis and his new best friend team up with a potential love-interest chick named Nora and are chased by the Outsider and a vicious assassin named Vince who firmly believes that he absorbs the souls of his victims and will eventually…wait, dammit. Hold on. This is the synopsis for the kickass book. Sigh. 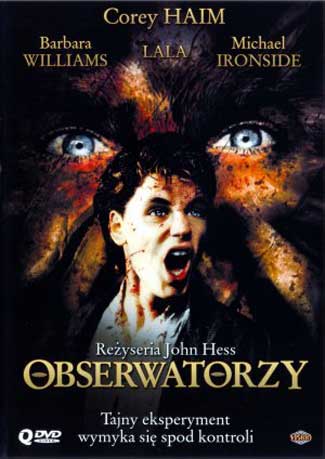 Based on the bestselling novel by Dean Koontz, WATCHERS tells the story of Travis Cornell, who is befriended by a highly intelligent dog escaped from a government lab and they’re chased by a big furry monkey-soldier-creature and a ruthless government agent. Oh, and Travis is now played by a teenaged Corey Haim. Nora is no longer a love interest, she’s his mama. Einstein is now called “Furface”. The fast, highly intelligent killer creature is now a dumbed down semi-slow moving midget Sasquatch-looking thing. The kickass “soul stealing” immortal wannabe Vince is nowhere to be found. There are many other huge differences, but that’s enough to list for now. Grrr, creative license in book-to-movie adaptations can kiss my muscular buttocks!! 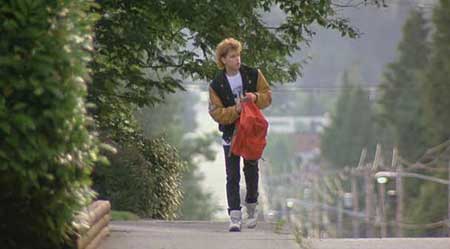 Now, I don’t want to give off the impression that I’m a book-to-movie snob…I’m really not. Back when this book came out I was still in high school and had more time to read than I do now. I was absorbed in all things Stephen King a little before that, but had started branching out with and loving the writings of Clive Barker, and WATCHERS was my first Koontz novel…I was loving life back then, so of course I was drooling for the movie once it was announced. So needless to say I was even more disappointed with this than when I saw one of King’s masterpieces, THE SHINING, get butchered on screen in 1980. Yep, I just went there. And that is a review for another time. 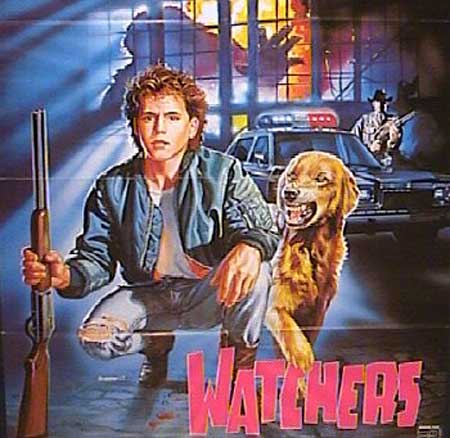 These days though, I have precious little time to actually sit down and read novels like I used to. This saddens me greatly. Don’t get me wrong, I’ll still try. But when I’m still not even halfway through Stephen King’s latest (that I know of) that came out six months ago around Thanksgiving…yeah, there’s really no hope left for me. So these days I hear something was based on a book and if I like the movie, I’ll make a little note that I need to add the novel to my wishlist and hope that it’s not more than 200 pages with large print and plenty of illustrations just so I can finish it in a year or less. Jack Ketchum is the exception to that – these days I would read a Chinese restaurant menu if I knew he wrote it. Yep, he’s that damn good. 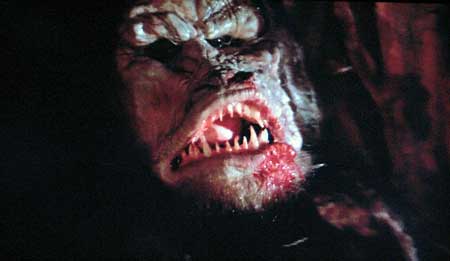 Through the years I’ve grown more and more disenchanted with the writings of most all of my horror author idols of my younger days which sadly includes Koontz and yes, even King. And while a few of the adaptations to Stephen King stories to the big AND small screens have been incredibly awesome, most have sucked for me. I think that to me, it’s because his novels are so damn long that it’s next to impossible to faithfully adapt and most who try to condense go in the wrong directions. But for the record, THE MIST was the most kickass movie of that year…very dark, very wonderful, and it still holds up. 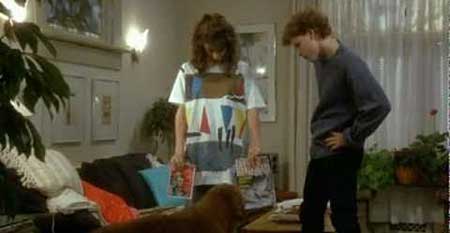 But with Dean Koontz adaptations, that’s a whole different creature – they were either so wildly far out of the same playing field or even the same park that they became a mockery of even themselves, much less the book the movie came from, such as WATCHERS here – which was obviously just something the studio wanted to throw money at and rewrite as a starring vehicle for the rising star in Haim. Hey, I’ve got no problem with that, just made a good movie, dammit. Or, on the other end of the spectrum with adaptations such as HIDEAWAY or MR. MURDER where even though they had very talented actors cast in the flicks they just bored the everlovin sh*t outta me, and that ain’t good either. Come to think of it, the only adaptation to screen from a Koontz novel that I enjoyed and truly loved was, believe it or not, PHANTOMS. And we all know that Affleck was the bomb in PHANTOMS, yo… 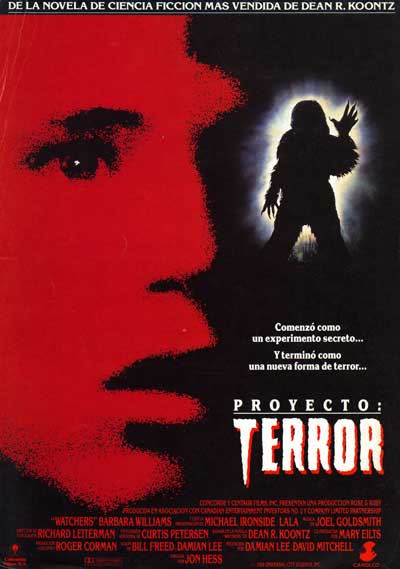