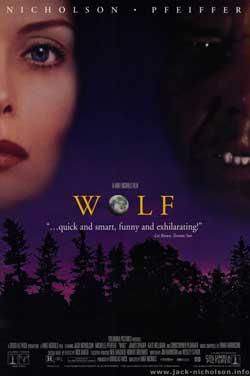 Publisher Will Randall becomes a werewolf and has to fight to keep his job.

There is sometimes a weird relationship that comes from horror themed films that feature A-list actors. It’s that same notion that we got when we heard that Tom Cruise would star in “Interview with a Vampire”. I think as horror fans, there is this rebel psyche in us that wants to dismiss before accept. “Wolf”, I’ve always felt is a fantastic film with a great storyline than somehow tends to fall into the underrated radar when it comes to werewolf films. I’ve seen many the list that will add old favorites like “Wolfen” and “Howling” but will forget to add this great entry. 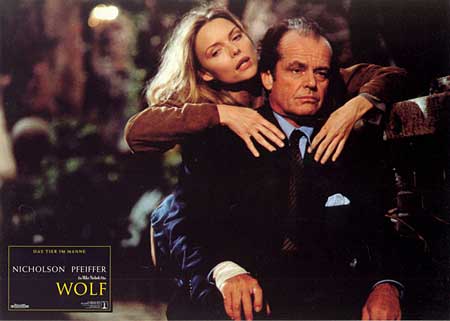 While “Wolf” benefits from an A-list casting marque, it ends up being a plus rather than a negative. The combination of Jack Nicholson, Michelle Pfeiffer, and James Spader in a werewolf film is quite unique and worthy of accolades. Even its title cuts right to the point with a one word branding…”Wolf”

But what is “Wolf” really about? Is it the inevitable accidental biting and moonlit transformation..or is it about a “system” that we as a society have come to know reflective of our own corporate culture? “Wolf” drapes itself in a movie monster horror blanket while announcing a deeper meaning behind its purpose. 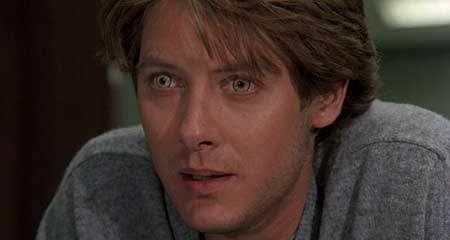 Created in 1994, “Wolf is directed by Mike Nichols who has directed such highly regarded films such as “The Graduate” and “Silkwood”. “Wolf” appears to be his first horror genre film.

Will Randall (Jack Nicholson) is an aged editor finding that corporate culture is no friend of his. At a swanky corporate party he is told by tycoon Raymond Alden (Christopher Plummer), that in addition to the takeover, Randall would be demoted from his editor in chief position. That same night Randall is bitten by a wolf on his way home. in all, not a good night for Will. 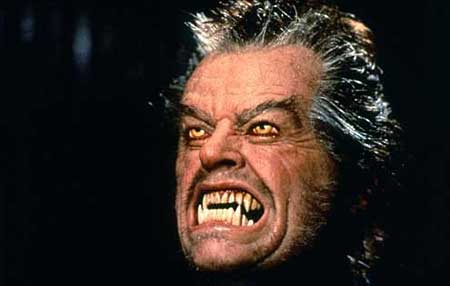 On top of all that, he suspects that his wife Charlotte (Kate Nelligan) has been having an affair and discovers that not only is she having an affair but with his colleague/ protégé Stewart Swinton (James Spader). Swinton is announced as the new upcoming editor and chief which drives the nail in harder.

While luck is not on Wills side, fate seems to be with his newfound “wolf-life” abilities. these include enhanced senses, sharpness, and that trademark heightened sense of smell. It is soon apparent that the powers of the wolf are well within Will’s new genetic makeup. The filmmakers of course have fun with this while Will becomes empowered fashioning the trademarks of a predator now rather than the prey. 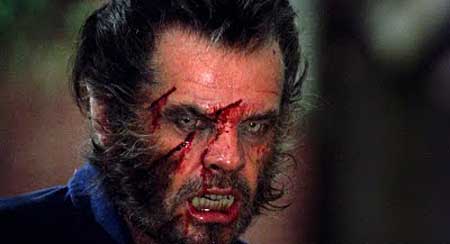 In an act of rage he bites Swinton while describing him being caught with his wife. This might be a good thing but it also means that Swinton is now on “his” way to becoming additionally wolf spited.

Will develops an odd relationship with Aldrne daughter Laura (Michelle Pfeiffer), that seems at first base don pity. It becomes deeper set involving Pfeiffer in the premise as it progresses forward with Pfeiffer becoming at the center of Will and Stewart’s wolf to wolf battle. We do get the full moon transformation as each comes into their own version of a werewolf. 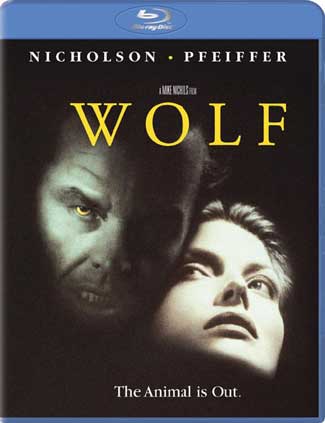 Now despite the fact that we have a classic werewolf battle coming to a head, “Wolf” chooses to keep its story more content to the human nature of transformation and the will of the underdog. Deceit, infidelity, backstabbing, corruption and innocence all play a great hand in this film’s general theme.

The movie was never followed by a sequel but has received quite a few awards. Original makeup was contributed by wolf master himself Rick Baker, though presented more subtle than other films of this genre. As an audience we get to see the wolf transformation thru actions and reactions leaving the actual physical transformation at the end. It was a reported that originally the film was delayed due to a poor ending that had to be re shot.. It was also reported that the role with Michelle Pfeiffer was personally offered to actress Sharon Stone.

“Wolf” has alot of charm and also sends a clear message about hope, change, and perseverance. highly recommended, “Wolf” is one to won.