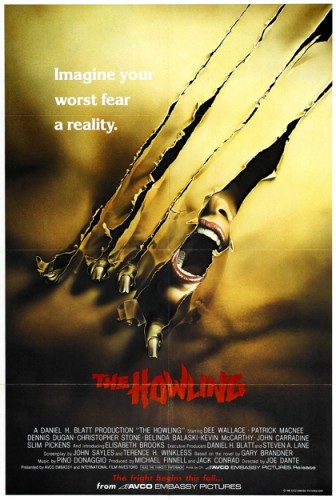 “There is a serial killer on the loose, Karen White is the only reporter he communicates with. After a near fatal encounter with him at an adult video store, she is ordered to take a vacation. Eddie was killed by Police, but Karen doesn’t want to let it go and discovers that he came from a tiny community in the woods and that’s where she decides to vacation with husband Bill. Big mistake, because Eddie was an outcast of a pack of Werewolves who is trying to keep a low profile and doesn’t want any interviews. Can Karen and Bill escape the village of the wolf?” (courtesy IMDB)

Joe Dante was born in New Jersey and, like so many children of the fifties, became enchanted with the cinema from an early age, devouring copies of Famous Monsters Of Filmland and Castle Of Frankenstein magazines, contributing articles to both. After pursuing a journalistic career following his graduation in 1968, he took the position of Editor on Film Bulletin magazine. But Dante wasn’t satisfied with writing about films – he wanted to make them. In 1974 he landed a position with Roger Corman‘s New World Pictures in California thanks to Jon Davison, and old college friend and future producer on Piranha (1978), Airplane! aka Flying High! (1980), Twilight Zone The Movie (1983), Top Secret! (1984), Robocop (1987) and Starship Troopers (1997). Like so many then-aspiring now-successful filmmakers, Dante and Davison learned their craft from my old friend Roger Corman, the king of cult directors, and for two years Dante devised and edited trailers and ad campaigns for such schlockbusters as Big Bad Mama (1974), Candy Stripe Nurses (1974), Cockfighter (1974), Capone (1975) and Death Race 2000 (1975).

Then came the big break, the dream with which so many joined Corman’s company. Dante convinced the wily producer that he could make a successful film for under US$100,000. Dante teamed-up with fellow editor Allan Arkush (future producer/director of the popular television series Heroes) and the two directed Hollywood Boulevard (1976), a parody of cheapskate New World Pictures. At a final budget of only US$60,000, Corman was absolutely delighted and again let Dante loose, the result being Piranha, wittily written by John Sayles, assured Dante of his future. Corman instructed Dante to make a Jaws (1975) rip-off, but the director turned in a deftly crafted horror film which contained enough good humour to ensure that the gore quotient never outweighed the entertainment value, and also allowed Dante to pay cinematic homage to one of his idols of the fifties, Jack Arnold, director of The Creature From The Black Lagoon (1954), a film which itself had partly inspired Spielberg in his direction of Jaws.

With Piranha taking chunks out of the box-office, Dante next turned his sights on the legend of the werewolf. In The Howling (1980), popular television reporter Karen (Dee Wallace) agrees to meet a brutal killer in a sex-shop booth. Police shoot him as he attacks her. She can remember nothing that happened in the darkened booth but, since we hear growls, glimpse hairy images, and know the title and the subject of this movie, we can be pretty sure he transformed into a werewolf. The human body that’s carted off to the morgue soon disappears – as you and I know, werewolves can be permanently killed only by silver bullets. Anyway, Karen suffers trauma from her experience which prevents her from functioning at work or in bed with husband Bill (Christopher Stone). 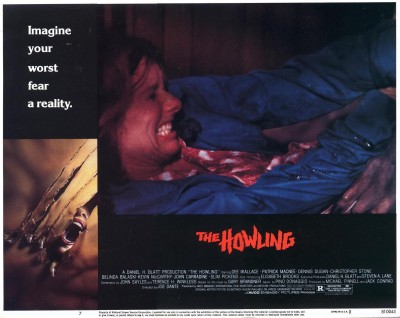 Pop psychologist Doctor Waggner (Patrick Macnee) invites Karen and Bill to stay at his retreat, where they will join others for some therapy and relaxation. When strange things start happening (howling in the woods, Bill is attacked and bitten, cattle mutilations, etc.) Karen asks fellow journalist Terry (Belinda Balaski) to come to keep her company. Meanwhile Terry has discovered that the supposedly dead killer who attacked Karen has a cabin at the very same retreat. It turns out the retreat is actually a colony of werewolves who are undergoing Doctor Waggner’s therapy so they can live in our society without being detected. 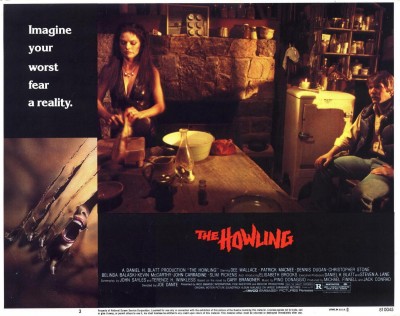 John Sayles rewrote the script written by Terrence Winkless which was adapted from Gary Brandner‘s original novel. The first half of The Howling is hip-funny, well-acted, stylish and scary, full of offbeat characters, veteran actors, movie references and clever inside jokes, with superb cinematography by John Hora. Then the story goes out the window and Dante overdoes it with the werewolf transformation scenes. As conceived by Rob Bottin, they are extremely impressive, but they completely slow down the film because they take so long (potential victims just stand there watching instead of running away) and happen many times during a brief time period. Worst of all, something bad happens to every character we like. Speaking of which, The Howling features a dream cast and cameos from many of whom are considered cornerstones of the horror film industry:

* Forrest J. Ackerman was the publisher of Famous Monsters Of Filmland magazine, film historian and was, for over seven decades, one of science fiction’s staunchest spokesmen and promoters.

* Bob Burns is an actor, consultant, producer, archivist and historian of props, costumes, and other screen used paraphernalia from some of the best (and worst) genre films ever made. He also starred in the 1975 television series The Ghost Busters as Tracy The Gorilla and was threatened by Peter Jackson’s King Kong (2005).

* John Carradine appeared over three hundred films with titles as diverse as The Invisible Man (1933), The Bride Of Frankenstein (1935), House Of Frankenstein (1944) Sex Kittens Go To College (1960) and Billy The Kid Versus Dracula (1966). Offspring include talented sons David, Keith and Robert, as well as grand-daughter Martha Plimpton.

* Roger Corman is the centre of our universe.

* Patrick Macnee is best known as agent John Steed in the UK TV series The Avengers, although you might recognise him from The Creature Wasn’t Nice (1983), This Is Spinal Tap (1984), Lobster Man From Mars (1989) or the original Battlestar Galactica.

* Kevin McCarthy was an award-winning character actor made famous by his role in Invasion Of The Body Snatchers (1956) and became another regular face in Dante’s ensemble. 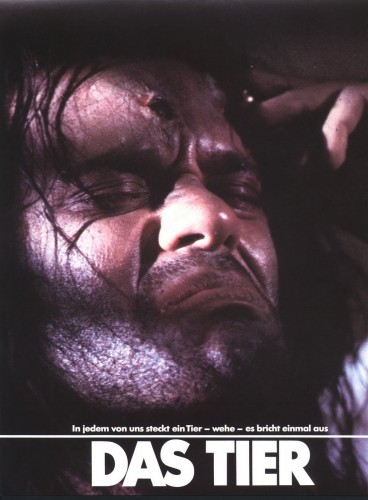 * Dick Miller was a major player in Roger Corman’s stable of actors and (while still alive) appeared in every film Dante has ever made, his most prominent roles being in War Of The Satellites (1958), A Bucket Of Blood (1959), The Little Shop Of Horrors (1960), The Terminator (1984), Gremlins (1984), and a personal favourite of mine, Looney Tunes Back In Action (2003).

* Robert Picardo is another of Dante’s regular ensemble who is probably best known for his television roles such as China Beach, The Wonder Years, Star Trek Voyager and That Stargate Show.

* Bill Warren is a film historian and critic generally regarded as one of the leading authorities on science fiction, horror and fantasy films.

Whew! I just love lists! Anyway, after The Howling, Joe Dante was next approached by Steven Spielberg and John Landis to take charge of one of the segments for Twilight Zone The Movie (1983), but that’s another story for another time. Right now I’ll ask you to please join me next week so I can poke you in the eye with another frightful excursion to the backside of Hollywood, filmed in glorious 2-D black & white Regularscope for…Horror News! Toodles! 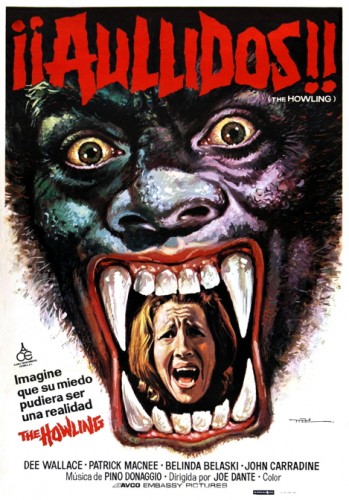