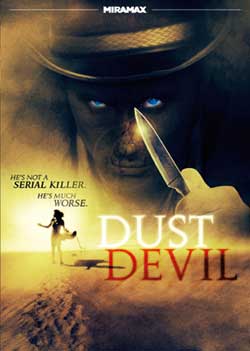 A woman on the run from her abusive husband encounters a mysterious hitch-hiker.

As with most isolated places, there are typically local spirits and superstitions that abound throughout the locals, having been either witnessed themselves or passed down over generations. Many of these types of spirit tales, at least according to the western folklore, are usually good beings that bring things like rain or a good harvest. However, although the film Dust Devil embraces this basic concept, it brings nothing but wickedness as the constantly needing to move with the desert winds spirit specifically targets the unloved and the lonely in order to snatch away from them the last remaining thing they harbor…life. For he has neither rest nor pity for his victims, and the word vicious is probably a much better adjective to describe him. After all, he’s not a serial killer, he’s much worse! 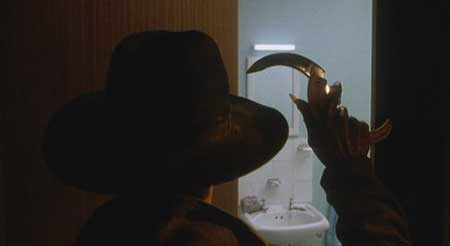 Wendy Robinson (Chelsea Field) is one of those lonely people who’s finally left her abusive and cruel husband. With the marriage over, her mind in a haze and her inner self is in turmoil, she travels in her Volkswagen toward a desolate nowhere. A hitchhiker (Robert Burke) appears and initially, she has no intentions of aiding. However, her emotions still hold a faint remnant kindness and she offers him a ride. The man, upon first meeting, seems nice enough and the audience is easily put at ease with his actions. Of course, as with and considering most horror movies, deep in the back of the viewers’ minds they know that the niceness is not going to last. 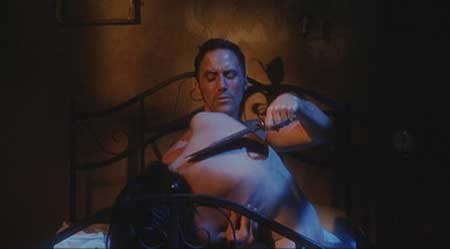 Before long, odd happenings start to occur and the audience is now certain that all is not going to end well. You can almost hear and feel the audience squirm as she obviously conveys regret in picking him up. 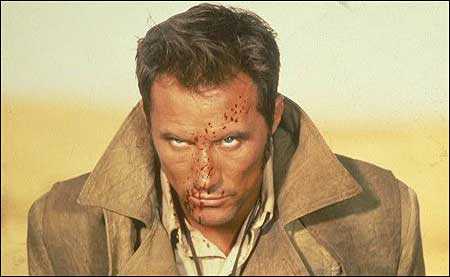 Little does she know that on the other side of town, Ben Mukurob, a local police officer played by Zakes Mokae of The Serpent and the Rainbow fame, is hot on what he believes is a murderer’s tail? He’s already paid witness to the spirit’s bloody evil deeds, those of which would make Jason’s butchering look like it was accomplished with simply a butter knife. He’s familiar with the old superstition, but isn’t so sure whether he believes it or not and tends to lean to more conventional wisdom. When a dream convinces him to finally come full circle, he realizes how wrong he was and is now fearful that it will take much more than mortal weapons to fight this adversary. 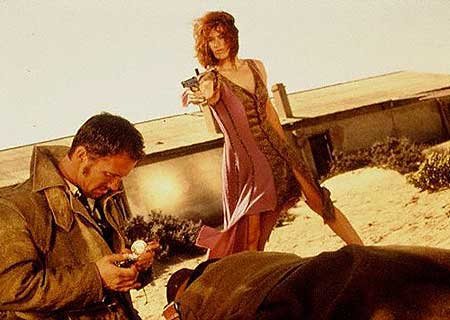 Seeking the aid of a well versed in witchcraft local, he is enriched with what will be required to bring the spirit down and stop the horror. Armed with the weapons he needs, new found knowledge, and a driving fear, he continues the chase, eventually tracking down the killer. But, is he too late and will he survive the confrontation? 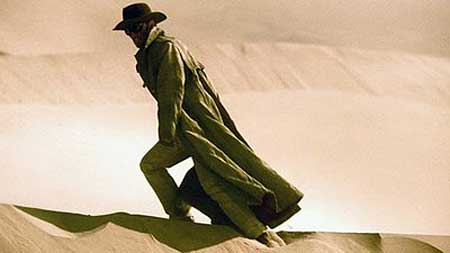 While most horror film fans are not likely to be aware of this movie and the ones that are will probably dismiss it as simply a “B” grade film. Regardless, it is not one to be missed and is certainly worth renting from your local video store. However, be forewarned, it does have a tendency to occasionally lose its storyline way sometimes, which can be rather confusing, but does pick it back up soon enough. I suspect this is due to cutting twenty five minutes off of the original. None-the-less, it’s a moody film that plays on the supernatural and utilizes the desert as a fantastic natural backdrop. If, for anything, watch the movie simply for scenic landscapes. 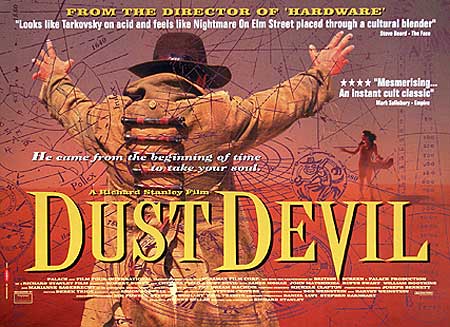 While this film will not appeal to every horror fan, those who are familiar with and have an understanding of either folklore and/or urban legends will find this wonderfully underrated film enjoyable.