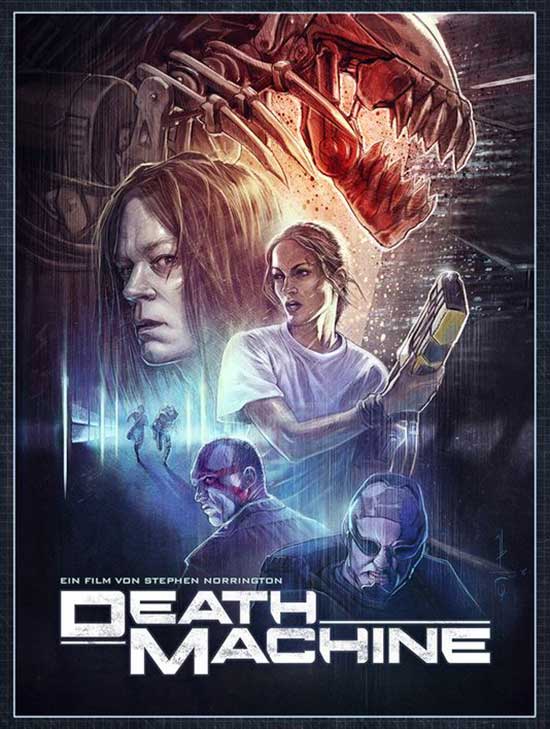 A crazed weapons designer unleashes his homicidal robotic creation, “The War Beast”, on a group of people after he is fired from his job.

In general I am not really into science fiction movies, so I went into Death Machine with less than stellar expectations. I remember seeing it at the video store back in the 90s but never bothered to check it out because it didn’t sound like it was my cup of tea. I decided to watch it recently just because I know several people who are really into it and I thought that it was just so-so. I wasn’t exactly blown away by it for several reasons but at the same time I didn’t exactly hate it with a passion either. While it was a little better than I thought that it would be I think that it is one of those movies that you watch once and then never bother watching ever again. 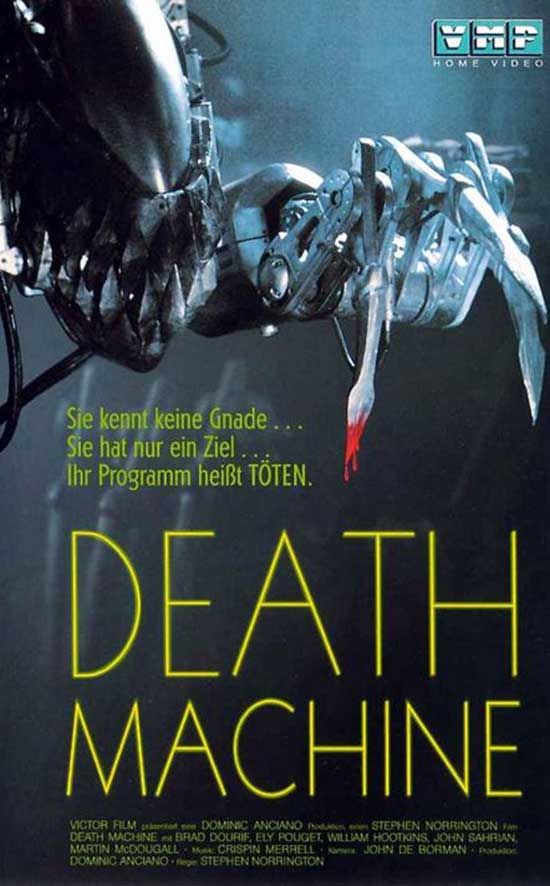 I thought that the premise worked. The film is set in the future and revolves around a woman investigating some shady things going on with the company that she works for that designs various machines and weapons. 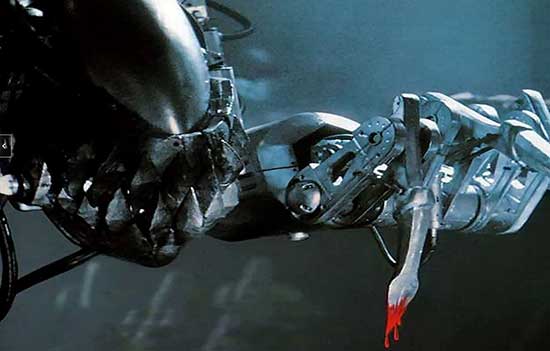 It turns out that the main designer-who seems to be totally out of his mind-is working on some projects that he shouldn’t be messing with, so she fires him as a result. He isn’t happy about this of course and locks her (and a few other people) in the building and sends his latest creation, “The War Beast” after them. Before you know it, his robotic creation is tearing people apart left and right as the remaining survivors fight to stay alive and make it out of the building in one piece. I thought that the plot was pretty cool and made for a good stalk and slash bit. There are some very intense moments as the main characters try to escape from the killer robot with their lives and some of the scenes that take place will definitely get your blood pumping and your heart racing. I enjoyed seeing them try to get away from the robot but it just seemed like it took way to long to get to these scenes but if you can make it through most of the boring first part of the movie you will enjoy things a little more once the War Beast starts tearing into pieces. 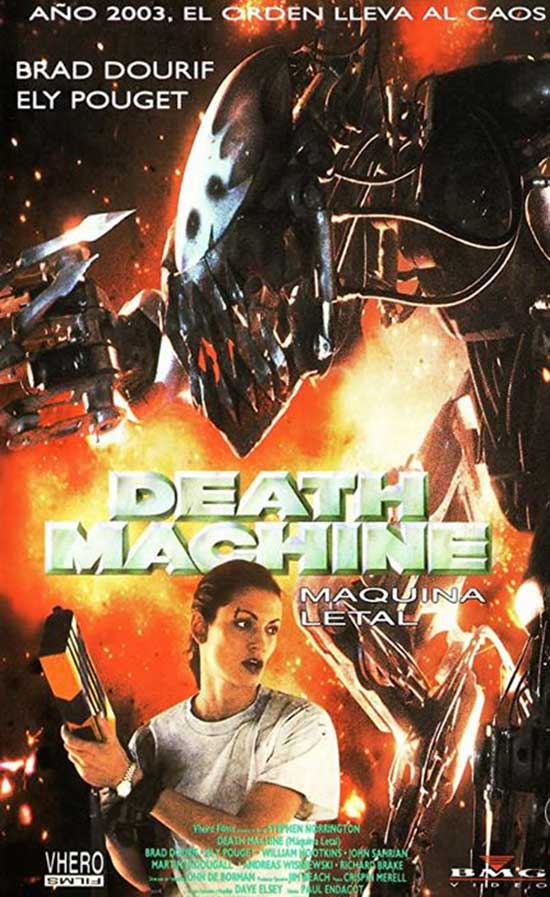 I also thought that the War Beast was mighty tough looking. I am terrified of robots and if I were in the same situation as the characters in the movie, I don’t think that I would last very long to be quite honest. I would be too busy being scared out of my mind and peeing my pants in total and complete terror that I don’t think I would be able to do anything to save myself (or anyone else) if such a horrifying machine was chasing me down. Like I said, the killer robot is quite awesome and doesn’t mess around when it comes to taking people out, and in my opinion, it is the main reason to see this movie. If you are as scared as robots as I am then you are going to be freaked out when you see this thing in action.

On the other hand, even though I dug the premise and loved the big evil killer robot, Death Machine does have its number of flaws. Clocking in at two hours it is a little too long and if you have a tiny attention span like I do you are going to get bored sooner or later while you are watching it. I think the first half is quite boring and things don’t really get going until the War Beast finally shows up, which seems to take forever. I think that about thirty minutes of the film (especially toward the beginning) could have been taken out to help things flow a little better. I was tempted to fast forward a handful of times to get to the good killer robot stuff while I was watching it and I found myself sort of zoning out more than once during the first hour or so. 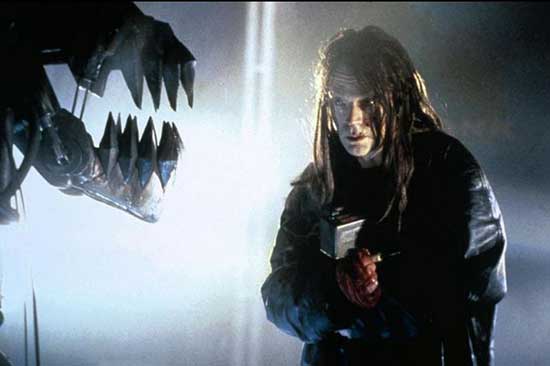 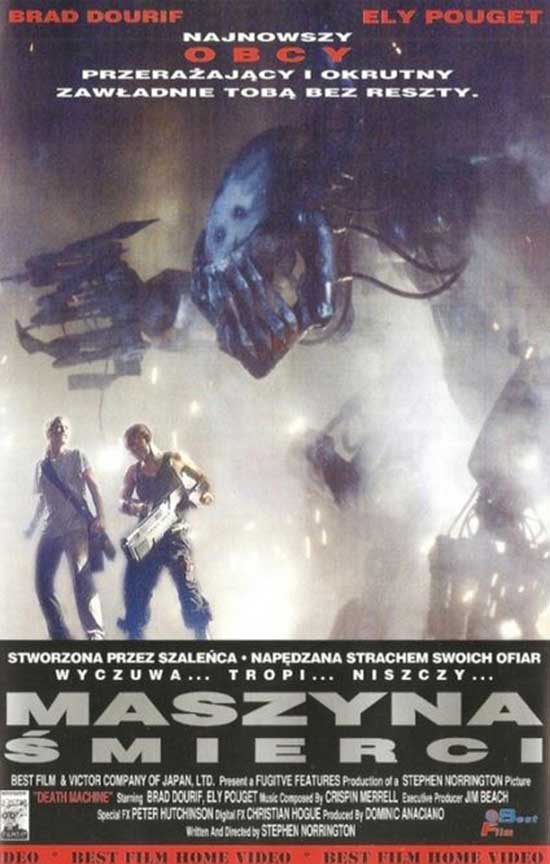 Death Machine wasn’t horrible, and I’m glad that I finally took the time to sit down and watch it, but in the end, I thought that it was a little underwhelming. Don’t get me wrong, it had its moments (thanks to the always awesome Brad Dourif’s performance and some fun death scenes), but I wouldn’t say that it was one of the best movies I’ve ever seen in my life. If you’re into movies like this chances are you’ll love it but if it isn’t really your thing then you’re probably better off watching something else. Give it a shot if you are curious, even though it won’t change your life or anything you could always do a lot worse.