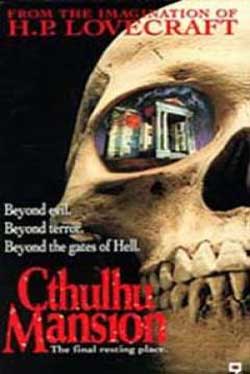 An aging magician harboring a terrible occult secret and his daughter are taken hostage in their isolated mansion by teenage scumbags need- ing a place to hide out. When the captors refuse to listen to the magician’s dire warning to release him unharmed, the mansion slowly releases its nightmare of horrors on the unsuspecting invaders.

“Cthulhu Mansion” is a movie that completely alluded me in the 90’s. It was a trailer I had found that led me to wanting to review this one. With that said, it has a few cool qualities but it’s not that great of a film. While it is based / inspired by the works of H.P. Lovecraft, I have since found that many films will make that claim and only contribute a small dose of comparison. 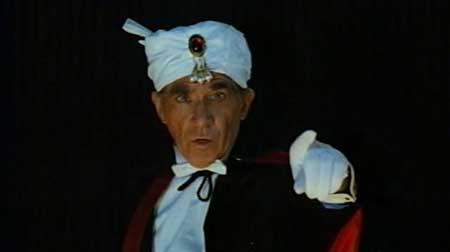 “Cthulhu Mansion” finds an aging magician named Chandu (Frank Finlay) who has suffered the traumatic event of seeing his wife burn to death before his eyes. At the time, his satisfaction with magic was fleeting, only to prompt him to take it to the next level delving in Satanic magic. The source of his efforts arrived from a hand written book him and his wife discovered in an old book store. At some point he also decided to name his estate “Cthulhu” but as to why….. was never quite clear. 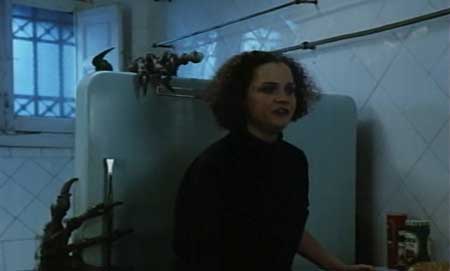 The occult backfired on him, and as a result his wife was taken away in a gulf of flames during one of his acts. His daughter Lisa (Marcia Layton) who bears a striking resemblance to her mother Lenore (played by same actress) is called back to help with Chandu’s act as an assistant. The performance goes well but it’s clear that Chandu has tired of this routine.

While the local carnival fair offers him a chance to perform again, it’s a group of young hoodlums that really make a mess of things on the outskirts. This young cast ensemble botches a Coke deal murdering the seller, and ends up getting into a confrontation with the security guards on hand. The group ends up getting one of the groups brother shot in the leg and so they are forced to find shelter while the heat cools down.

Very quickly they kidnap Chandu and his daughter into taking them back to the estate to fix up their wounded colleague. As you can guess, this event leads to a mansion that doesn’t quite like the presence of rude, harmful strangers unleashing an evil force in the process that aims to take each of them out.

While the practical effects at times are pretty decent for a small budget film, “Cthulhu Mansion” doesn’t have alot going on for its shallow premise. Essentially we have Chandu, his daughter Lisa and their mute servant tied up as the gang take it upon themselves to hang out an party. Despite Chandu helping them with attending to their wounded, they seem clueless only concerned with a bag of coke and bickering among themselves. The inevitability here is that we expect the sh*t to hit the fan with demons and creatures taking over. Chandu’s wife appears from beyond to warn him that evil forces are stirring but this does little to prevent them. 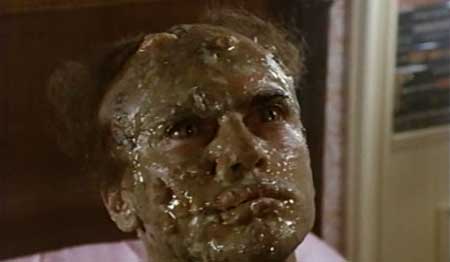 As strange locked basement door, a evil fungus, a few hallucinations and a pair of refrigerator monster hands make for the majority here. In final act, we get the manifestation of a demon who looks to be covered with a sludgy caked on goop.

This film is noted as being directed by Juan Piquer Simón who has dipped his hands in a few horror film projects. One of more noted value is the film “Slugs“. The movie originates in Spain even though it features an all American cast. It is still presented in its Italian name of “La mansion de los Cthulhu“, while consumers can find it under its American name of “Cthulhu Mansion”. 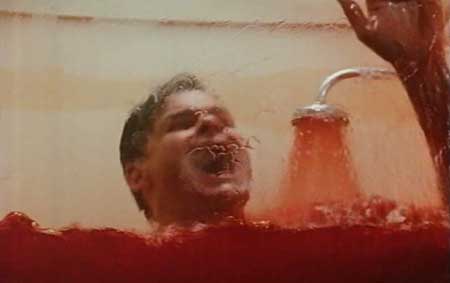 What I thought was lacking is the level of Lovecraft association. It was clear that it had a relation to the man’s work but lacked the kind of depth and integration that we’d expect from a marketing ploy using the man’s name. Cthulhu Mansion is easily a forgettable film that does offer a slight introduction to actress Melanie Shatner. Shatner kind of reminded me in appearance to an early Demi Moore, and while being dealt a somewhat plastic role, is the face I came away remembering. 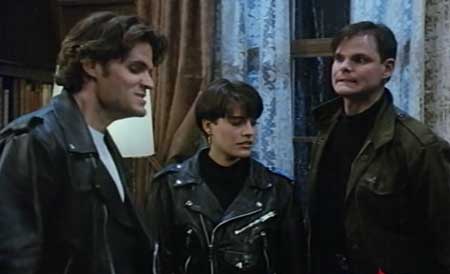 It’s not great 90s work but “Cthulhu Mansion” does have a few decent parts that might entertain horror fans.