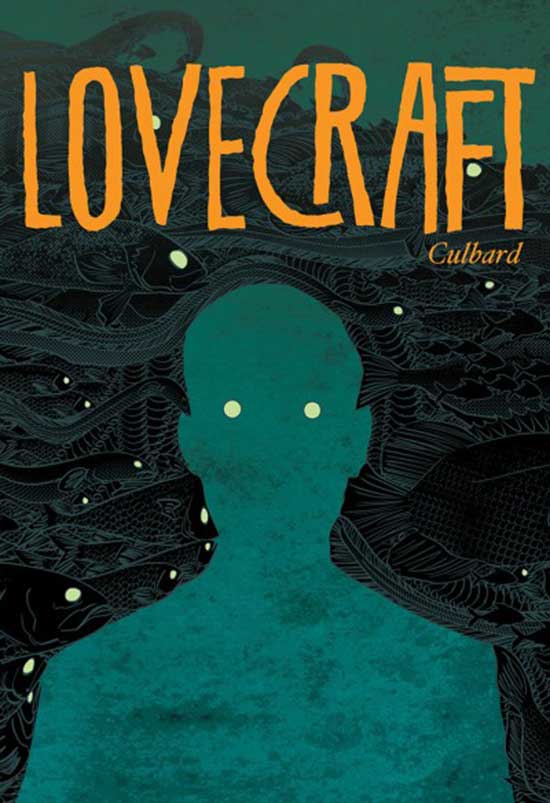 Released in 2018 from the publishers “SelfMadeHero, we have an impressive volume totaling over 512 pages of pure Lovecraft-ian intrigue. Yes, author and artist I.N.J. Culbard has placed his heart and soul into this one with a huge collective of illustrative works that cover 4 HP Lovercraft stories. Those featured here include: The Dream-Quest of Unknown Kadath,” “The Case of Charles Dexter Ward,” “At The Mountains of Madness,” and “The Shadow Out of Time.”

Anyone who has spent any time with Lovecraft’s stories whether per literature or film knows that they are often far removed from traditional horror and fantasy taking readers on journey of the mind invoking fears on the unknown. Dark, strange, peculiar even, they are often more nightmarish & dreamlike than anything that resembles traditional horror with all walks of strange creatures that freely emerge out of the mind of this classic horror author.

Culbard takes on the difficult task of visualizing much of these notions into sharp, well defined works of illustration that embellish this awesome piece of work. 512 pages is no easy task especially when the entire volume is presented in graphic novel form. The book itself features a sturdy hardcover coming in at around 7×10 in size. The hardcover and perfect binding make for a great coffee table book or sturdy inclusion into your library. In all if you are a fan of HP then you’ll want to own this release immediately.

As mentioned before, the stories here are strange and intriguing starting with the first titles” “The Dream-Quest of Unknown Kadath”. Essentially it a mental and physical journey that takes a dreamer on a fantastical quest to ancient lands full of odd beings and quirky transmorphive creatures. Cats, goblins, slothy tentacled beasts, and ogre-like messengers direct our main character thru the journey of a lifetime that makes his unrelenting trip into fantasy worlds an epic adventure into itself. Set primarily with his sites on a particular destination our travelers wastes no time in taking on the challenges despite the warnings offered to him. It is bizarre and stunning all in one.

The 2nd story titled: The Case of Charles Dexter Ward, centers on an inmate that escapes from an insane asylum. Interesting, but in retrospect, I found this one hard to follow and stay focused on. The story is long and sets itself as a period piece. Perhaps the language here was a bit too “old English” for me to appreciate properly.

Moving on to the 3rd inclusion we get to the more noted “At The Mountains of Madness” which really takes a lead from the movie “The Thing” with a excursion into the Arctic. As the team drills and seeks oil, new interest emerges that has part of the group heading off to explore the nature of some cryptic signs carved into found rocks. This outing leads them to the titled towering “Mountains of Madness” and its ominous curious black peaks. Though what awaits on the other side of the peaks is where this story digs into the oddly Cthulhu-like inhabitants and the discovery of a lost species called the “elders”. The story while weird and journey-driven (like the first) has no real clincher at end leaving sort of an open resolve, which I found odd on completion.

The 4th story is titled: “The Shadow Out of Time” which rounds off this huge volume of illustrated fiction. In review, this book proves to be a worthy piece worth selection that takes its readers into a world of surreal creatures, situations, and diverse storytelling. In fact those who struggle with Lovecraft’s unique writing style may find this format much more suitable for intake with its lush imagery and visualizations. In short, H.P Lives on with another cool injection of modern horror presented for readers of supernatural fantastical horror fiction.

I.N.J. Culbard is an award-winning artist widely known for his graphic novel adaptations of classics. He collaborated on a critically acclaimed Sherlock Holmes series with Ian Edginton, as well as adapted Robert W. Chambers’s The King in Yellow for SelfMadeHero. His first original graphic novel, Celeste, was nominated for the British Comic Award