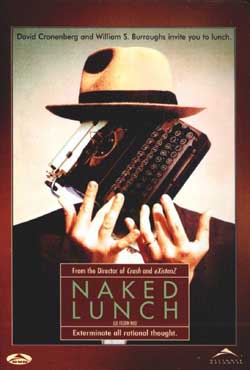 After developing an addiction to the substance he uses to kill bugs, an exterminator accidentally murders his wife and becomes involved in a secret government plot being orchestrated by giant bugs in an Islamic port town in Africa.

“Naked Lunch” is so bizarre that it instantly falls into a cult film category without even trying. Director writer David Cronenberg brings to the screen a William S. Burroughs influence that was deemed un-filmable. “Naked Lunch” attempts to tell a story of William S. Burrough’s in a biographical way mixing in a drug induced haze over a science fiction style mind screw. It has its main character becoming a c**kroach per a curios typewriter and heading to an off shot port called “Interzone” 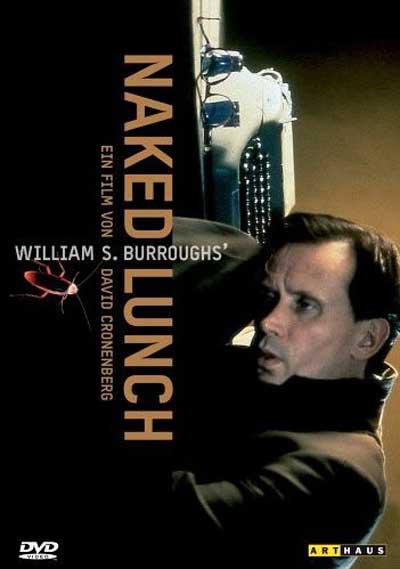 The film takes place in the 1950s with actor Peter Weller taking the lead as William Lee (William S. Burroughs’s real name). He finds that his wife has been stealing his insecticide called “pyrethrum” to use for drug purposes. Lee begins to hallucinate himself when exposed to the powder setting the film off onto a visually rich but bizarre path. The lines of his profession as an exterminator become all too real to this character who now shares an experience with them. 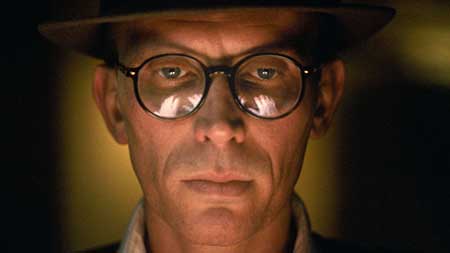 Lee is approached by a giant bug which sends him on a mission. This mission will take him to a place called “Interzone”. The events that follow mirror much of Burroughs real life while twisted to make for a more fantastical storyline. The typewriter that is used in the film becomes an organic influence turning eventually into a giant talking insect itself. The term “black meat” is introduced which refers to a narcotics drug operation. Lee finds that he will have to prove his profession as a writer to complete his mission. 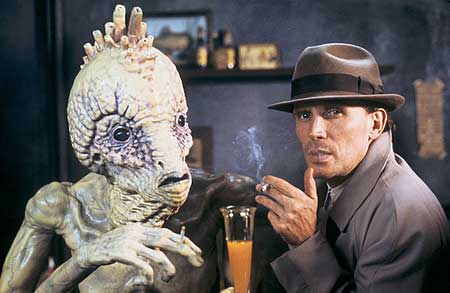 While I confess to watching this film several times over the years and really enjoying it, it is by far so left field that it repels viewers into confusion making it a complex unwatchable movie that is far from the comfort of being consumer friendly. By this, I mean that those who enjoy the work of David Lynch, might embrace this while others will simply dismiss it as being pretentious and bizarre. It has been deemed disgusting, dark, an visceral to many critics who have tried to decipher it. 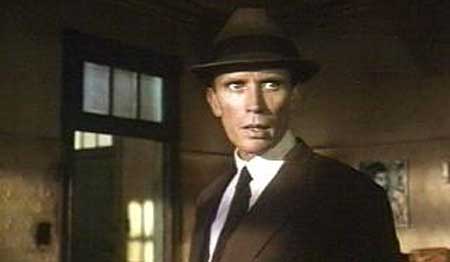 The film contains characters which base themselves on people Burroughs dealt with or had encounters with. The details of these comparisons can be investigated in further reading on Burroughs himself. Though it was true that Burroughs was a drug addict and exterminator which accounts for some of the plots visual points. In real life, Burroughs had an accidental mishap that resulted in his wife being shot in the head per a “William Tell” game. 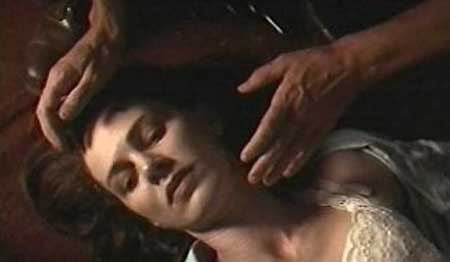 Some have felt that the film was more of a mirror of director Cronenberg’s imagination than a tribute to the writer. Certainly its hallucinogenic given state mirrors some of he more drug-induced films over the years such as “Tommy” and “Head”. Though Naked Lunch is indeed in class by itself that relies on aesthetics to carry its points made. If it weren’t based on reality to some extent it might simply be dismissed as a fantastical piece of science fiction. Though despite its personal relationship it asks of its viewers, it is still an impressive piece for director Cronenberg’s menagerie of cinematic moments. 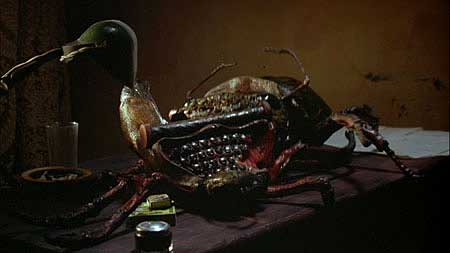 “Naked Lunch” is one of the all time great cult films that almost defines the definition of cult in its presentation. Director David Cronenberg has also created some of the more worthy cult films with his organic horror style. Naked Lunch is no exception but falls into a class of dramatic horror crossing over into science fiction thru its hallucinate drug segments. I advice those who have never seen it to perhaps read up on it “before” taking the ride. This will prevent the usual confusion and correlate some of the plot points into a more cohesive manner. 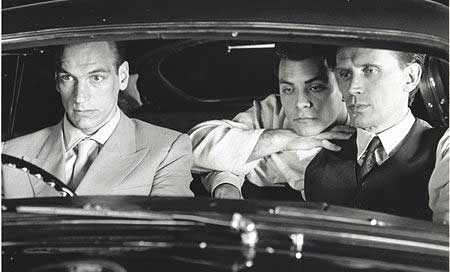 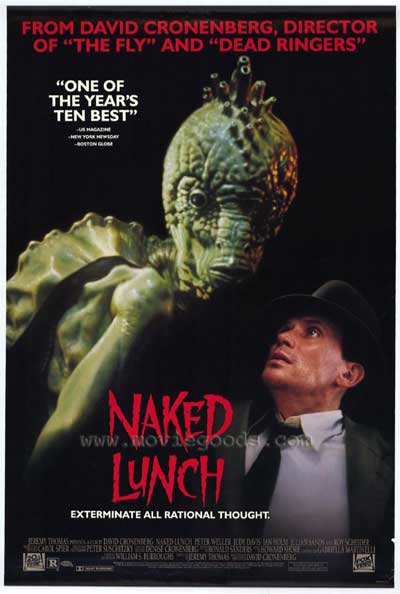 The film features the alluring score by Howard Shore and Jazz musician Ornette Coleman. The film was selected by Criterion for release under its prestigious organization as am important piece of filmmaking.