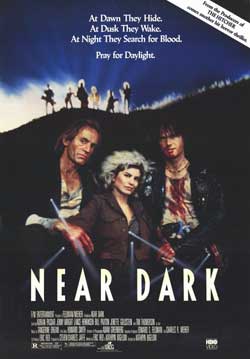 A young man reluctantly joins a travelling “family” of evil vampires, when the girl he’d tried to seduce is part of that group.

One of the top vampire themed films ever created, “Near Dark” often sits in a class of its own. Far from the traditional aspects, void of romanticism, and even more of a cult film than some of the more predictable vampire films, “Near Dark” is a creation that has lasted the test of time.

Director Kathryn Bigelow had her own way of approaching these unliving blood suckers. It arrived on a subtle note, calming, and more appropriate to the struggle they endure rather than the domination. Make no mistake, the vampires are powerful when they want to be, however they also have to endure a changed lifestyle that presents them more as a gypsy band on the run than a politically dominant species that has world order on their minds. 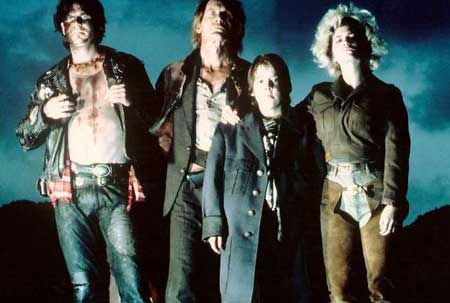 “Near Dark” arrived the same year that the “other” famed vampire film arrived by the name of “The Lost Boys” (3 months apart). Vampire movies were beginning to forgo alot of the traditions favoring a more hipper modern approach to the subject. This aspect has been copied many times over with slightly different directorial needs over the years. The players of “Near Dark” were dirty, tired, isolated, and unkept. You might even compare then to a form of biker gang rather than a collective of desirable well polished seducers.

They had powers, they had strength, they also had a curse that forced them to ride within a blacked-out window van moving from town to town hunting for new blood. 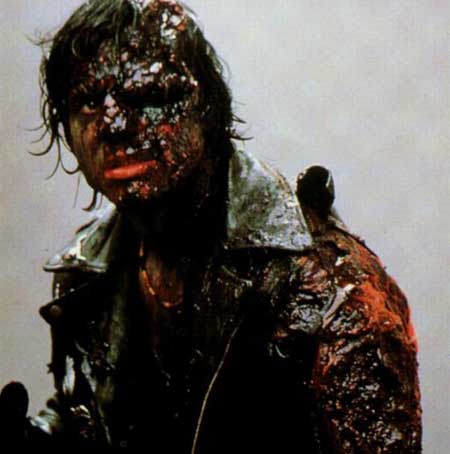 At the head of this movie was actor Adrian Pasdar playing Caleb Colton. Adrian received the public eye again as Nathan Petrelli in the hit series “Heroes. We have a classic and much dialog-copied Bill Paxton as the hipper more violent western character Severen. Jenette Goldstein played the assumed motherly profile of the group, Diamondback , though it was actress Jenny Wright who ultimately stood out in her much heralded role of Mae.

Jenny Wright with her innocently pure profile and her involvement as a blood sucker herself made for a nice contrast. Wright even though a default icon by association alone from this film, would only return to one more horror role in 1980’s with “I, Madman” she later appeared in 1992’s The Lawnmower Man. It was soon that she would quickly fade out of movie acting altogether for many years. Which is a shame as she was a most memorable favored actress.

“Near Dark” was marketed as an American vampire film with a western edge. Not the “old west” but with a nomadic loner approach comparable to the gunslingers of yesterday. While it performed poor at the box office, its following quickly drew into a cult interest that “loved” the film often renting it several times over. 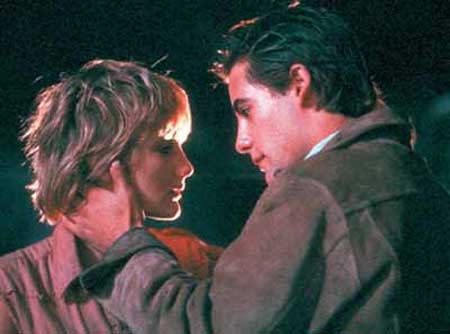 The film follows young Caleb Colton who meets Mae. She bites him while drifting thru town in the interest of securing an attractive new vampire partner . Her group wanting to kill him off immediately allows Caleb to live long enough to see if he can “cut it” as a vampire while learning to hunt.. Caleb is reluctant to embrace this new lifestyle…as one he didn’t ask for. Caleb begins to form a bond from his attraction to Mae.

Jesse Hooker (Lance Henriksen) is the leader of the group with many years behind him in the art of living as one of the undead. Bill Paxton as Severen is one of the more wild additions who also makes up part of this dysfunctional traveling family. They travel per van with all the windows blacked out for protection from the sun. One of the more noted scenes involves the arrival at a off shoot bar where the team massacres the place in an effort to feed.

As the story evolves, we learn more about he group and that a vampire can actually be “undone” with a blood transfusion. The film is shot with a dark, edgy style that is perfectly fit to an ongoing Tangerine Dream soundtrack. 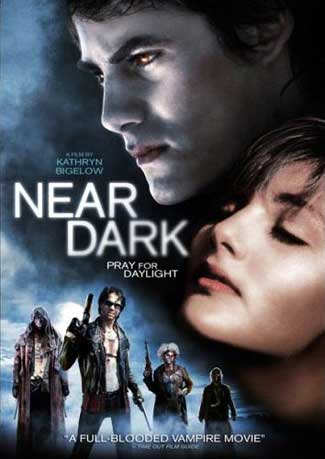 Critics ranged in opinions with some dismissing it as a hillbilly film while others celebrated it for its unique appeal.The film never received a sequel despite rumors for many years circulating that one was in the the works. A remake was also reported which has been put on hold due to the success of the Twilight franchise.

“Near Dark” has made top vampire lists for years heralding it as a single achievement in bringing something fresh to the table of new ways to attack vampire movies. In many ways it inspired some of the more hipper present day TV series such as “True Blood”

If you are looking to build a top vampire movie list, then “Near Dark” should definitely have a spot secured as an important entry.