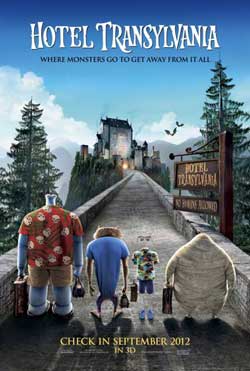 Dracula, who operates a high-end resort away from the human world, goes into overprotective mode when a boy discovers the resort and falls for the count’s teen-aged daughter.

As we get closer to Oct. 31st & our favorite holiday, we get a few more horror films released into theaters for our entertainment. Most are not for children but this year they get a ghoulish treat from Sony Pictures called “Hotel Transylvania” and after watching it with my son (Black Saint Jr) I think it’s safe to say that it’s as much a treat for adults as it is for the little ones. 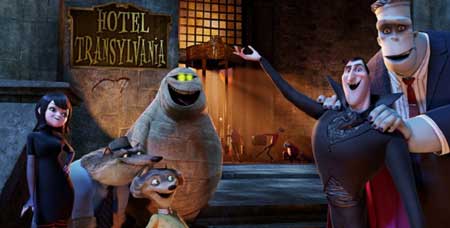 The story features Count Dracula (Adam Sandler) who no longer spends his nights stalking fresh human blood, he’s now busy running a very exclusive 5 star hotel for monsters & their families! His staff is made up of various zombies, witches, skeletons, armor wearing ghosts & Quasimodo the hunchback with a french accent (Jon Lovitz) who is the head chef. Dracula is busy preparing his hotel for a gathering of monsters who are arriving to celebrate his daughter’s 118th birthday. Her name is Mavis (Selena Gomez) & she’s a lot like your typical young girl who’s on the cusp of adulthood except she’s a vampire and she hasn’t ever left the castle/hotel at all. She has a yearning to explore the outside world (Especially Hawaii) but her father is extremely protective of her and is truly fearful of the worst monsters he’s ever encountered…human beings.

As the film progresses we get introduced to all of the classic monsters arriving at the hotel one at a time. First to arrive is the Wayne the wolfman (Steve Buscemi), his wife Wanda (Molly Shannon) & his gaggle of extremely unruly wolf children. Afterwards we are introduced to Murray the Mummy (Cee Lo Green), Griffin The Invisible Man (David Spade) and The Frankenstein monster (Kevin James) along with his bride Eunice (Fran Drescher). All of them arrive separately with great fanfare, Frankenstein & Eunice arrive disassembled in crates because he’s too cheap to book a flight (He says he’s “Plane-O-Phobic”)! In addition to the big four there are quite a few other monsters of lesser infamy in attendance as well. Monsters like the Hydra whose seven heads each have a different complaint, Some really hungry Gremlins, A honeymooning pair of flies, A family of skeletons, Bigfoot, a green blob like creature and myriad others. 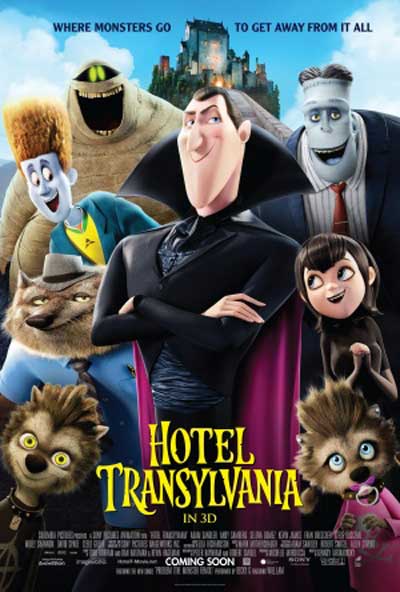 Into this “Terrifying” group of creatures walks in Jonathan (Andy Samberg), a human being! It seems Jonathan got lost & rather than stay away from the scary forest as he was instructed to by the locals he decides to go right into it because…well how scary could it really be huh? He then followed a group of zombies right into the castle where he innocently asks if there’s a room available. Dracula is understandably horrified at the arrival of the one creature everyone in the hotel is terrified of so he attempts to hide Jonathan away somewhere until everyone is asleep and then kick him out of the premises that doesn’t really work so he makes Jonathan up to look like a monster in order to fool his guests. In addition to all Drac’s troubles Mavis runs into Jonathan meets Mavis & they immediately fall for each other much to her father’s horror. So Dracula tells her he’s a party planner hired to help make her party a truly awesome one. He tells the monsters that Jonathan is a second or third cousin to Frankenstein’s right arm (!) and although they’re initially leery, they accept him as one of their own which comes in handy as they plan to serenade Mavis with some tunes they wrote for the occasion that are less than festive to say the least… 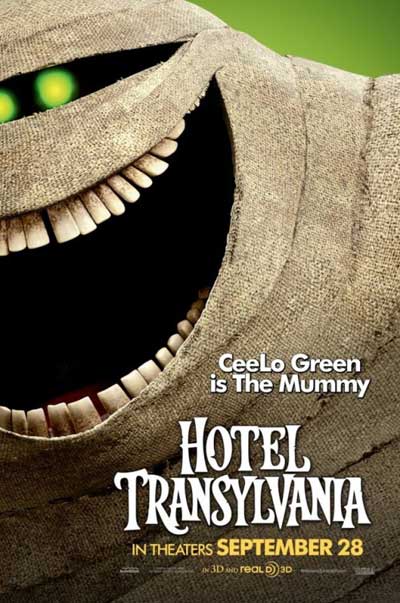 Director Genndy Tartakovsky (Samurai Jack, Star Wars: Clone Wars, Dexter’s Laboratory) does a marvelous job of reining in Sandler and his buddies (Who generally all appear in his films). Sandler’s Dracula isn’t over the top as I expected it to be and that’s a nice surprise. The triumverate of James, Buscemi & Spade are extremely funny and oddly natural sounding as their respective monsters. I think it was a great idea to keep their voices as is without any over the top histrionics. Spade in particular has some really great moments as an easily offended Invisible Man but by and large the jokes don’t get any racier than a fart bit that’s actually funnier than you might expect. Samberg has the stoner/surfer/all around nice guy voice down pat and Buscemi has a few inspired bits as a Wolfman who didn’t want any kids and is father to an unruly (But lovable) horde of little monsters. 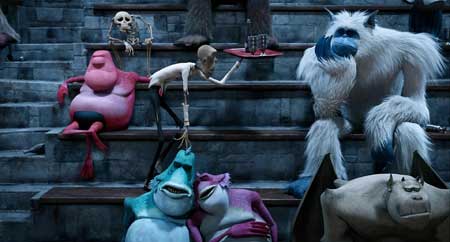 The whole design of the film is nothing you haven’t seen before but it does an effective job of getting the whole grisly vibe of the surroundings down just right. The film takes place all around the hotel and there is a nice variety of environments on display here which give a sense of the enormity of the hotel. As the story continues we find out about Mavis’ long deceased mother and the reasons why monsters look at humanity as the REAL creatures to be scared of. Again it’s nothing you haven’t seen before but that doesn’t make it bad, I found it to be very entertaining and funny as well.

It does feel a bit longer than it needed to be but it kept the audience I saw it with in rapt attention so what do I know? The 3D is efective but as usual, hardly necessary to enjoy the movie. There are a few nice 3D effects but nothing you’re gonna regret missing by watching the 2D version instead and saving a few bucks. Some of you in the know might be reminded of “Mad Monster Party” (1967), the Rankin-Bass stop motion theatrical feature which had a very similar storyline minus the birthday angle and if anyone connected to this film claim they know nothing of it then I would immediately scream “SHENANIGANS” on them and their foul lies! The two films are practically attached at the hip! 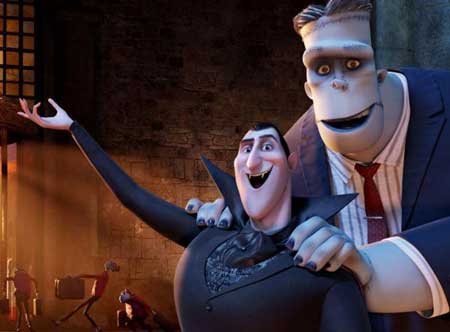 The most unexpectedly enjoyable part of the film for me was the music the creatures play. There is another similarity to the “Groovie Goolies” cartoons of the 70’s where there was a band consisting of Dracula, Wolfman & Frankenstein playing some pretty bad songs, although they did a pretty nice version of Daddy Dewdrops “Chick-A-Boom: Don’t You Just Love It?”. The music here sounds like something you might here at a rave and although that’s not really my bag (I dig Sinatra…so sue me), it’s really a lot of fun here and I wanted to hear a lot more of it. 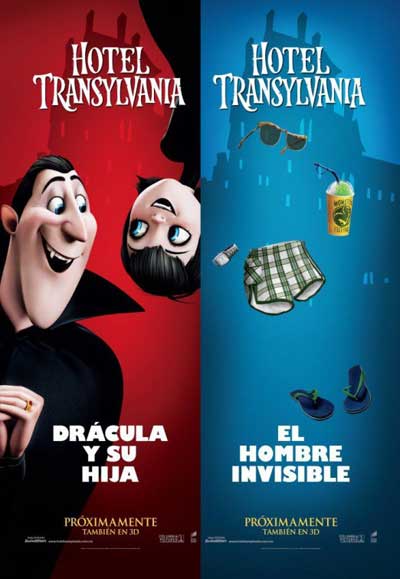 The audience I saw “Hotel Transylvania” with applauded at the end of the film which doesn’t happen too much but I really felt that the movie deserved all of it. It’s a great treat for the little ones this Halloween and I’m fairly sure that adults will get a kick out of it too. Check into the “Hotel Transylvania” with your little ones for a monstrously wonderful time!