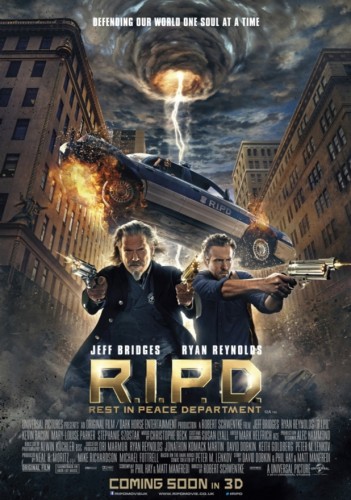 Boston police officer Nick Walker (Ryan Reynolds) finds himself on the wrong end of his corrupt partner’s gun barrel when he decides to turn in evidence the pair lifted at a recent bust. Upon realizing he did not survive the fatal shot to his face, Walker avoids judgment when the R.I.P.D. (Rest in Peace Department) recruits him to hunt down the dead that have escaped hell to return to Earth as monsters, called deados. He teams up with veteran cop, Roy Pulsipher (Jeff Bridges) who is assigned to show the rookie the ropes. On their first day, they discover a plot to rebuild an ancient device that will allow the dead to return to Earth forever.

If it were not for the chemistry between co-stars Jeff Bridges and Ryan Reynolds, R.I.P.D. would be a complete disaster. Even so, the pair are no Tommy Lee Jones and Will Smith. While neither Bridges nor Reynolds wear black and shades, they do share far too many similarities to the pair from the Barry Sonnenfeld 1997 film (and its sequels). Director Robert Schwentke tries his best to add his own signature to the film and the familiar concept, but finds himself lost in a muddled, tire script. He does manage to give the film a few entertaining action sequences, paces the film at a brisk 96 minutes and stages some elaborate 3D visuals. R.I.P.D. is entertaining, funny and action packed but lacks an emotional core, originality and much common sense. Silly, trite and forced, R.I.P.D. is left to succeed or fail on the shoulders of its stars, Bridges and Reynolds: Bridges delivers a quirky performance while Reynolds is forced to be the straight-man. Rest in Peace, indeed.

The highlight of R.I.P.D. is Jeff Bridges as Roy Pulsipher, the veteran western lawman adapting to the modern world the best he can. It is a fun role that is not too far removed from his version of Rooster Cogburn. Roy, however, is over the top, a caricature of the western stereotype. Bridges dialog is frenetic, a slapdash combination of 1800’s dialect with modern phraseology. It often sounds as if Bridges has cotton in his mouth or is sporting a lip full of tobacco. Roy is c**ky, stubborn and over-confident, a loner who forces his new partner to earn even the simplest hand shake, much lest his trust. Regrettably, the character, as he guides Nick Walker through his first day, is often relegated to long soliloquies of exposition. It’s to Bridges credit that he manages to make much of the nonsense entertaining. His choice moment is when a rare vulnerable side is exposed after Walker insults him elaborating not too favorably to what happened to his bones at the time of Roy’s death at the mouths (and worse) of a band of coyotes. His hurt and pain at that moment is one of the few genuine emotional beats during the whole affair.

Ryan Reynolds is given yet another thankless role previously having troubles as Wade Wilson in X-Men Origins: Wolverine and Hal Jordan in Green Lantern. His Nick Walker toils to rise above those cinematic atrocities. He sure looks good, though – he is one handsome devil. But, he gets lost next to Bridges, all the special effects and sloppy story. He has difficulty holding together the main narrative allowing his co-stars to become far more interesting than his character should be. None of the eternal conflicts prescribed to the role ring true and Walker borders on becoming one of the lamest heroes of the year. In addition to forced motivation and contrived acceptance to whole ordeal, the character lacks anything unique or interesting. Everything comes across circumstantial. When it comes to the action, Reynolds poses and grimaces with the best of them, but to what point.

Besides Mary-Louise Parker as Mildred Proctor, the supporting cast fare little better than Reynolds is both the roles they are given and their execution. Kevin Bacon, a usual favorite, phones in his role as Bobby Hayes, Walker’s partner who betrays him early in the film. Bacon is typically one of the better parts of any film he is in from X-Men: First Class to Crazy, Stupid, Love and is exceptional as Ryan Hardy in The Following; however, he walks through R.I.P.D. looking as if he is unsure of what the hell is going on. Worse, his character is given no back story or motivation to even the first action the character takes. Robert Knepper appears briefly as Stanley Nwlicki the first “Deado” (the term used for the zombie-like monsters populating the narrative) encountered by Walker on his first day. Like most every other co-star, he is given nothing important to do, which is a shame given what Knepper can do. James Hong is similarly handcuffed as well, only given a few lines as Grandpa Jerry Chen, Nick’s avatar used by the R.I.P.D. to mask his true identity. He is literally relegated to a visual gag along with his co-avatar, Marisa Miller. Mary-Louise Parker is the only one who manages to rise above her role giving Proctor a snappy, sharp quip and wit, successfully livening up the film with even the slightest glance or wince. She is a delight.

A big problem with R.I.P.D. is the monsters. The design of the supernatural creatures is overly animated in a cartoon-like flair. They bounce around like Woody Woodpecker behaving like rabid versions of Tom and Jerry. At times the gag works, but much of the time it becomes too busy and overly kinetic and frivolous. Even when they are in environments where they should fit in, they do not. They are also dull, poorly conceived and unimaginative. Much like the aliens in Men in Black, the creatures are supposed to be comic relief, but they end up being silly more than comical. Occasionally a slick laugh will creep in, usually with the help of the living actors such as one encounter having Roy being dragged around the Boston skyline by a rope shot into a obese critter’s ass. The worse offense is the final reveal of the big bad which is far too lame for words.

Director Robert Schwentke follows up his successful Red with R.I.P.D. giving the action the same flair and style. He provides the film with an energetic pacing and dynamic camera angles. He is able to weave the fantastic elements into the normal with ease providing the film with a convincing marriage of the contrasting worlds. He gives most of his attention to Jeff Bridges’ Roy Pulsipher. When he casually drives around in his yellow 1970’s sedan like he’s riding a stage-horse side-saddle, it mirrors the carelessness the script has with its own structure. At least the visual gag with Bridges slacker demeanor is funny. Schwentke does manage to do some interesting things with the 3D in R.I.P.D. paying attention to staging and blocking with an eye to foreground. However, many of his better efforts are marred by quick cutting and unnecessarily zooms that hurt the eye more than tantalize it. However, not every scene is as successful as the previous. Schwentke’s efforts are as unorganized and wildly unsuccessful as the script itself from Phil Hay and Matt Manfredi. 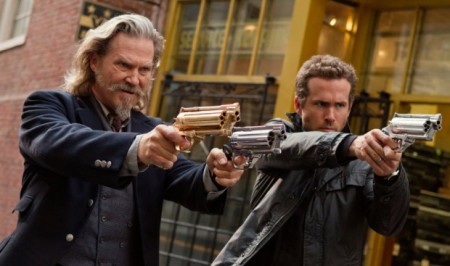 R.I.P.D. is a lifeless mess that manages to be entertaining from time to time mostly due to its charismatic co-stars, Jeff Bridges and Ryan Reynolds. The jokes fall flat, the effects are uninspired and the concept is far too familiar. The comparisons to Men in Black are difficult to overlook. Jeff Bridges colors his Rooster Cogburn persona with a healthy injection of Foghorn Leghorn that flops as often as it works, as long as his garbled speech is not too incomprehensible. The visual contrast of the character is usually goofy enough to get by. The dizzy 3D undermines Robert Schwentke’s best efforts to get the feel of the added dimension while the lackluster monster designs water down the tone and feel. R.I.P.D. is a film full of good intentions and harmless buffoonery, but the mix never gels and the film struggles to gain its footing often falling flat on its face. Every scene is a toss up between entertainment and boredom.