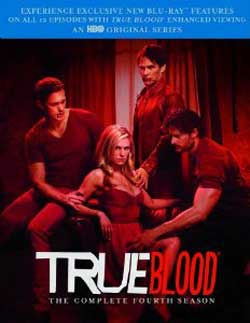 Available May 29, 2012, All Formats Are Loaded with Exclusive Bonus Content

As yet another supernatural force comes to light in Bon Temps, a fresh pot of trouble brews for Sookie and the town’s residents. Releasing May 29, 2012, True Blood: The Complete Fourth Season will be available on “Blu-ray with HBO Select,” DVD and Digital Download for the suggested retail price of $79.98 and $59.99 respectively. Both sets include the full 12-episode season, along with extensive bonus materials including exclusive interviews and never-before-seen content.

New from HBO Home Entertainment®, “Blu-ray with HBO Select” offers True Blood Blu-ray buyers the choice of three ways to watch – Blu-ray, DVD and Digital Download. This marks the first time a television series box set has included all three formats in one complete package. Additionally,previous seasons of the hit series will also be available on “Blu-ray with HBO Select” day and date with season four. The digital copy is redeemable via a provider of your choice: iTunes, Vudu, and Amazon, or an UltraViolet copy through supporting providers.

Includes “Blu-ray with HBO Select:” DVD + Digital Copy
Enhanced Viewing:
Character Perspectives (picture-in-picture): find out the back story of what happened in Bon Temps while Sookie was missing in Faerieland and get the inside scoop from your favorite characters including Andy, Arlene, Crystal, Debbie, Don Bartolo, Godrick, Jason, Lafayette, Luna, Maxine, Melinda, Nan, Pam, and Tara.
Vampire Histories/Character Bios and Hints/FYIs: get even more background on favorite characters, trivia facts as well as show hints and clues.
Flashback/Flash Forward: move through time in the world of Bon Temps. Flashback to relive pivotal moments or Flash Forward to reveal the significance of a certain scene.
True Blood Lines: uncover secrets from relationships past and present in this engaging, fully interactive guide and archive.

True Blood: The Final Touches: join show creator and executive producer Alan Ball as he reveals an exclusive, never-before-seen glimpse in the post production process of True Blood.
Inside the Episodes: get the backstories on each episode with revealing interviews from the show writers.
Audio Commentaries: six commentaries with cast and crew including Alan Ball, Anna Paquin, Stephen Moyer, Alexander Skarsgård, Deborah Ann Woll, Sam Trammell, Fiona Shaw, and more.
Called “addictive” by The Washington Post, True Blood: The Complete Fourth Season finds Sookie embroiled in a love triangle and tangling with a charismatic witch; Lafayette, Tara, and Jesus get tempted with otherworldly powers; Jessica tries to adjust to domestic life, while Jason finds himself alone in werepanther territory, and Alcide is caught in the clutches of an old flame. As old alliances crumble and new relationships form, nobody’s safe when there’s magic in the air.